Honda Atlas has launched the 2019 Civic facelift today in en event held at Royal Palms Lahore. The facelift, which can best be described as minor cosmetic addons have seen an increase in price as well. The 2019 Honda Civic facelift variants are priced as: 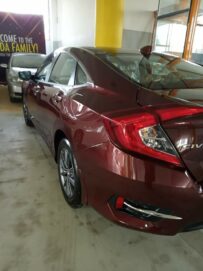 Considering the above, apart from the new LED headlamps and the 1.5 liter Turbo variant which gets a new ECM module, the changes implied to the facelift in Pakistan are minimalistic and mainly cosmetic in nature. The true features which were added to the international Civic facelift, as discussed in our earlier post, including the new front bumper where the lower apron now sports a one-piece look instead of three, remain absent.

Honda Atlas has started to take bookings of the 2019 Civic facelift against PKR 1.2 million whereas the delivery of vehicles will be made in July 2019.