The 12th generation Toyota Corolla has been launched in Taiwan on the 27th of March 2019. Taiwan is the second market after China to have received the 12th gen Corolla in the Asian region.

The all-new Toyota Corolla Altis was first unveiled at the Guangzhou Auto Show China in November 2018, in two distinct visual appearances. However the Corolla Altis in Taiwan is unified with the European market look. 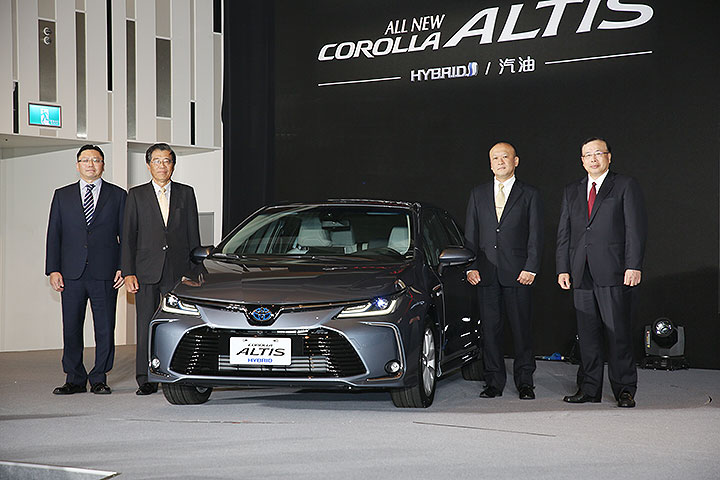 The 2019 Toyota Corolla Altis in Taiwan is offered with 5 trims in both gasoline and hybrid derivatives with 2nd gen Toyota Safety Sense and 7 airbags as standard across the range.

The all-new Corolla Altis adopts the TNGA modular platform, which increases the anti-twist rigidity of the car by 60% by increasing the number of welded joints by 31% and integrated side reinforcement with ACA (Active Corner Assist) system.

In terms of power, the 1.8-liter 2ZR-FE Dual VVT-i petrol engine with a maximum horsepower of 140 hp / 6,400 rpm coupled with Super-CVT-i that simulates a 7-speed gear change. The engine ECU has been re-tuned to bring better acceleration and response, and can meet the Euro-6 emission regulations in advance. The average fuel consumption according to the Energy Bureau of Taiwan is 14.9 kilometers per liter.

The hybrid version is equipped with the same 1.8-liter 2ZR-FXE THS-II setup as in the Prius. The 4-cylinder engine redesigns the intake port, EGR, and improves the thermal efficiency to 40%. After the integrated motor module, its comprehensive power is 122 hp coupled with E-CVT electronic stepless transmission. The average fuel consumption as per the Energy Bureau is 25.8 kilometers per liter.

The 12th generation Toyota Corolla will start to reach other Asian markets towards the end of this year. It’s hard to predict when the new Corolla is going to reach our market as according to Toyota, the use of the new global platform for manufacturing Corolla will be quite a challenge with the company needing to convert all of its 16 plants (including Pakistan) which manufacture Corollas across the globe to the TNGA production setup.

The current 11th gen Corolla was launched in our market back in 2014 and will complete 6 years of its life in 2020. Perhaps one may expect the 12th gen to arrive in Pakistan by 2021.