EV Batteries Can Now be Charged in 5 Minutes

Electric vehicles (EVs) are becoming increasing popular in recent years in various parts of the world as developed markets have hinted the ban on conventional gasoline engines in coming years in a bid to protect environment and lessen their dependency on fossil fuel.

EVs are already being produced in good numbers by various automakers however one thing that’s a prime concern for EV users is the time it takes for the vehicle batteries to be fully charged. Now it seems this concern is about to be fading out as batteries capable of fully charging in 5 minutes have been produced in a factory for the first time, marking a significant step towards EVs becoming as fast to charge as filling up petrol or diesel vehicles.

The new lithium-ion batteries were developed by an Israeli company called StoreDot and manufactured by Eve Energy in China on standard production lines. StoreDot has already demonstrated its “extreme fast-charging” battery in phones, drones and scooters and the 1,000 batteries it has now produced are to showcase its technology to carmakers and other companies. Daimler, BP, Samsung and TDK have all invested in StoreDot, which has raised $130m to date and was named a Bloomberg New Energy Finance Pioneer in 2020.

These batteries can be fully charged in 5 minutes but require much higher-powered chargers than used today. Using available charging infrastructure, StoreDot is aiming to deliver 100 miles of charge to a car battery in 5 minutes in 2025. According to Doron Myersdorf, CEO of StoreDot:

“The number one barrier to the adoption of electric vehicles is no longer cost, it is range anxiety. You’re either afraid that you’re going to get stuck on the highway or you’re going to need to sit in a charging station for two hours. But if the experience of the driver is exactly like fuelling [a petrol car], this whole anxiety goes away.

A 5 minute charging lithium-ion battery was considered to be impossible. But we are not releasing a lab prototype, we are releasing engineering samples from a mass production line. This demonstrates it is feasible and it’s commercially ready.”

In case of existing Li-ion batteries, graphite is used as one electrode, into which the lithium ions are pushed to store charge. But when these are rapidly charged, the ions get congested and can turn into metal and short circuit the battery. The StoreDot battery however, replaces graphite with semiconductor nano-particles into which ions can pass more quickly and easily. 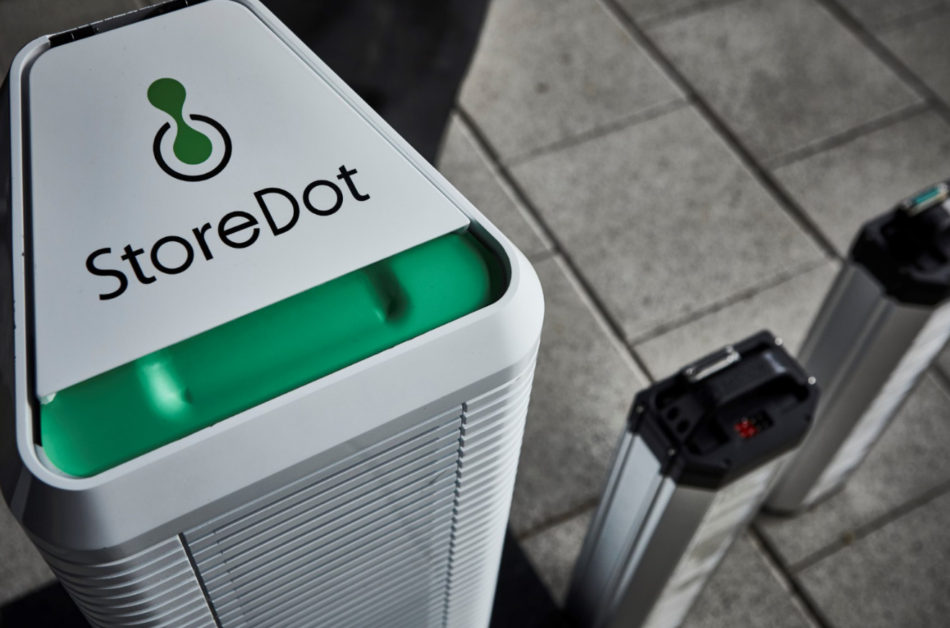 These nanoparticles are currently based on germanium, which is water soluble and easier to handle in manufacturing. But StoreDot’s plan is to use silicon, which is much cheaper, and it expects these prototypes later this year.

Myersdorf said that the bottleneck to extra-fast charging is no longer the battery. Now the charging stations and grids that supply them need to be upgraded. He added that the cost of new StoreDot batteries would be the same as existing Li-ion batteries