Filling Fuel Tanks to the Max in Summers is Completely Safe

‘Due to increase in temperature in coming days, please don’t fill petrol to the maximum limit of tank; it may cause explosion in the fuel tank. Please fill the tank about half and leave half for the air.’

In case you have received such message on WhatsApp and are worried about topping up your fuel tank, let us tell you that this is a fake news. This message went viral a couple of days back & used PSO’s name to warn people not to fill their tanks to the maximum. In fact such incorrect messages are spread not just in Pakistan but usually everywhere else where temperatures goes high.

Related: Petrol Pump Scams: How to Avoid Being Cheated

In response to the message, PSO released an official statement declaring the message fake and demystified the myth behind filling fuel tanks to the max in summers. 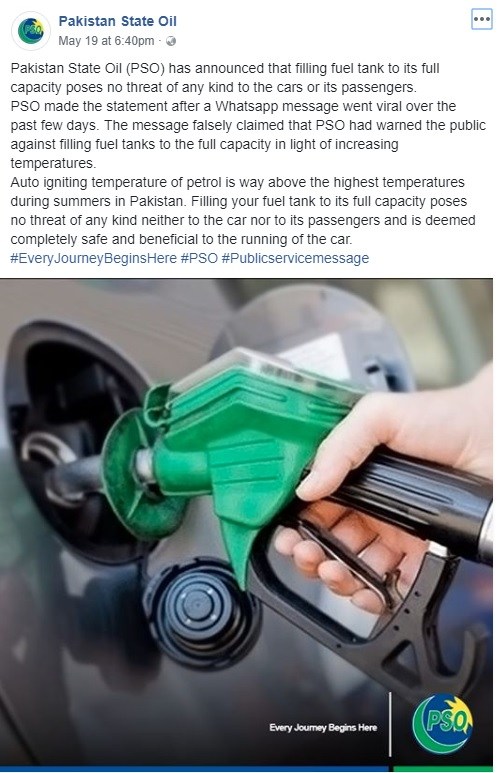 According to PSO, the company released no such message to warn people of max fuel tanks causing an explosion. In addition to that, the company has also clarified that filling the tank to full capacity poses no threat of any kind neither to the car nor to its passengers.

Related: 5 Safety Tips to Follow While Refueling Your Car

Automobile manufacturer design their vehicles considering all aspects of performance requirements, claims and ambient conditions with built-in safety factors. The maximum volume specified in the fuel tank for petrol/diesel vehicles is no exception. It is, therefore, perfectly safe to fill the fuel in vehicles up to the maximum limit as specified by the manufacturer irrespective of winter or summers.

Furthermore, the temperature at which Petrol auto-ignites is around 246 to 280°C. Moreover, the self-igniting temperature of Diesel is around 210°C. On an average, Pakistan experiences a temperature of 40-50°C during peak summers which is much lower than the auto-ignition fuel limits, means petrol can never catch fire on its own.

Filling your fuel tank to full capacity is perfectly safe and beneficial to the running of the car because the auto-igniting temperature of fuel is significantly higher than the temperatures experienced in our country.