Started as a refrigerator manufacturer back in 1986, Geely saw success selling inexpensive products to Chinese consumers. By mid 1990s it stepped into motorcycle manufacturing and started to develop small vans in 1998. A year later got approval from the Chinese government to manufacture automobiles. The first Geely car rolled out of assembly lines in 2002 while hardly 7 years later, was able to take over the Swedish marque, Volvo.

In addition to the quality and features, the success of modern Geely cars is primarily attributed towards the maturity of designs, which is one of the main pillars behind Geely’s rise – which sold 1.25 million vehicles last year and the man responsible for it is none other than Peter Horbury, Volvo’s Ex Vice President of Design, who is currently heading Geely’s design department as Senior Vice-President. 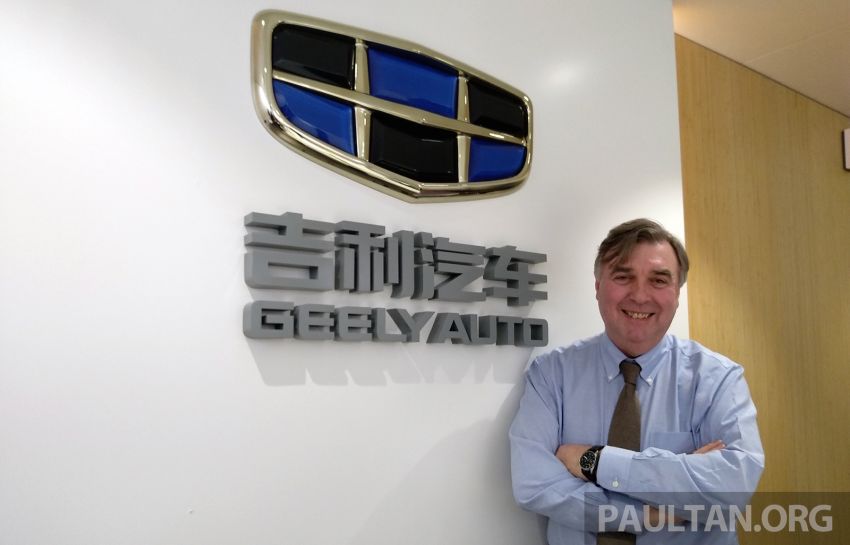 With over 40 years experience in car design, Horbury led Volvo’s ‘Revolvolution’ in the nineties and was also responsible in injecting ‘Americanness’ (and a lot of chrome) into US Fords. As Geely’s group design chief, he currently oversees over 600 staff in locations such as Shanghai, Gothenburg, Barcelona and California.

The Geely empire is a fast growing one, and Horbury’s team will have to determine the design direction of brands as disparate as Geely, Lynk & Co, the London EV Company and new additions Lotus and Proton. Paultan spoke to Horbury on the sidelines of the Beijing show, where he talked about everything from animal faces to his vision for Proton Design. Bear in mind after acquiring Proton, Geely now aims to penetrate the South East Asian market.

On how Geely’s design identity was born

PH: I took a look at the whole range of Geely cars and realized that there was no brand identity being built at all. There were many different designs. What I did is put a presentation together for the senior management of Geely and said look, this is what I see. 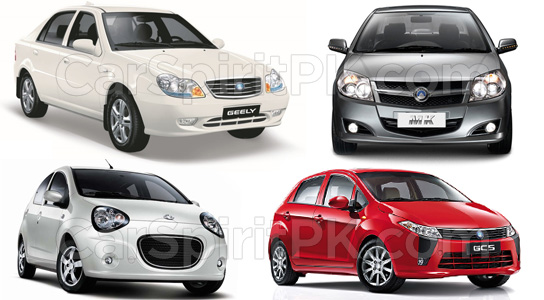 It was a massive screen, pictures of all the Geely cars available. Then as I spoke, each Geely was replaced by a different animal – a tiger, a shark, an eagle, different species of animals. “Look, this brand is as diverse as the animal kingdom, there’s nothing tying them together.”

Then I took all the animals away except one, the domestic cat. And then I said look at this – what I’m not suggesting is we do this (the cat picture on the screen then appeared in different lenghts, heights and legs – the same photo adjusted in every dimension). Some companies are getting close to this, they do the same design in different sizes.

If you look at the cat family – pumas, lions, tigers, leopards, cheetahs – each has its own character, but by looking at them you instantly know they’re part of the same species, or brand.

PH: The cat was an inspiration for the Bo Rui – a cheetah running. The really pronounced shoulder rises over the hind legs, and a very strong shape of the underneath of the cat. Look at the Bo Rui and you see exactly those lines. All of the cars have at least this thing (a curve) on the front fenders – Bo Rui, Boyue – the same signature. 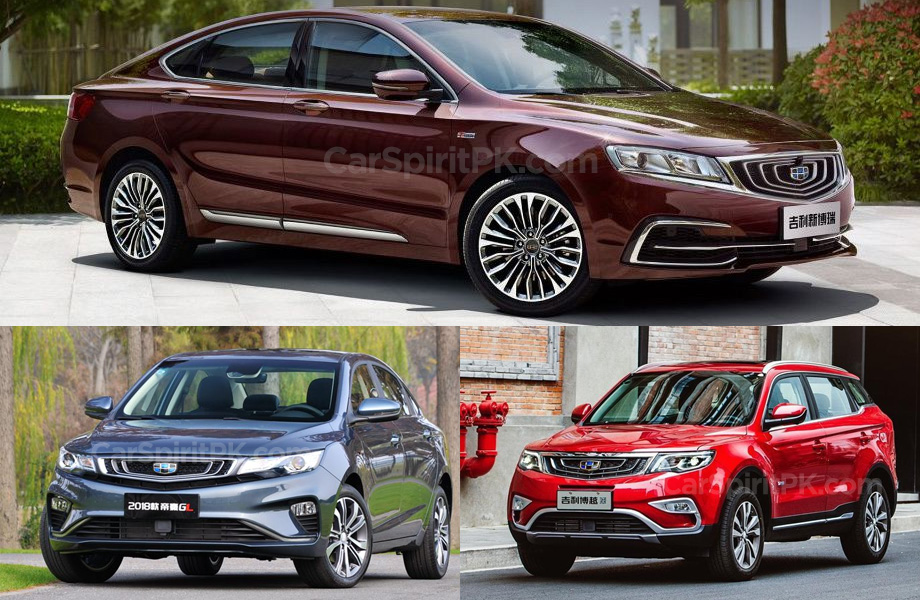 The grille is very important because in China, and I think in a lot of the Far East, the face is critical. People see the character of the vehicle in the face. One of the most interesting aspects of that is that in the West, the eyes are in the windscreen, like in the movie Cars. It’s sort of logical; you look through the windscreen, we’re looking at the human face. In the East, the face is there (pointing to the car fascia) and that’s (crossing out the windscreen) irrelevant.

One of the interesting aspects could be – and this is just a theory – in China for example, animals play a big role in culture (gives examples of animals in the Chinese zodiac) and animal faces tend to have a different juxtaposition of eyes to mouth (draws snake and bird). It’s not the same as the human face; it has varying degrees of proportions of eyes to nose to mouth. I just wondered if in China, maybe people assume all sorts of different species on the front of a car, not necessarily human. That’s just a theory of mine.

On the “expanding cosmos” grille

PH: That was an extra. It was our chairman (Li Shufu) – he’s very philosophical and a great guy to work with – who said “when I look into the front, I want to be looking into the cosmos, into the distance, into space.” I was like, how on earth do we translate that? 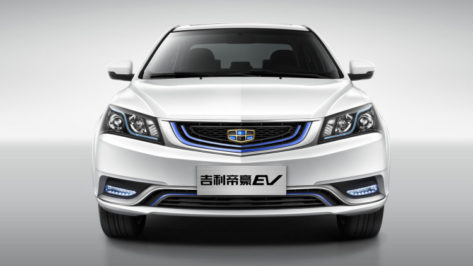 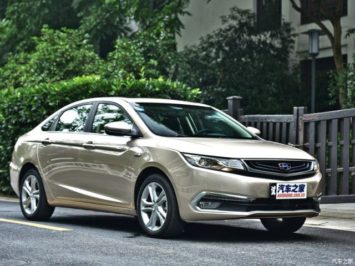 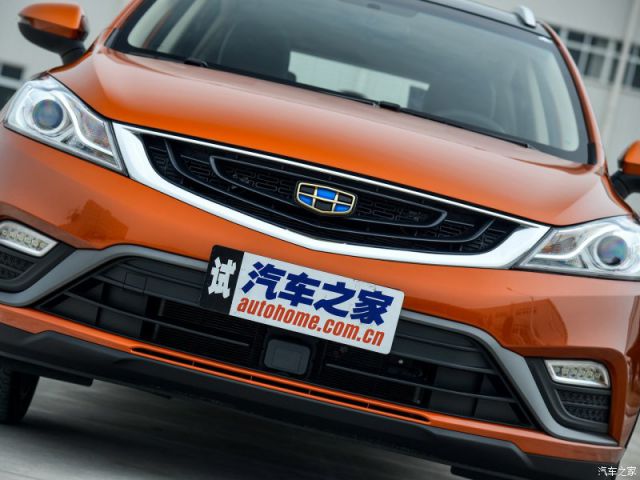 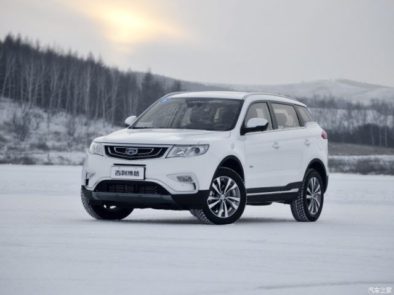 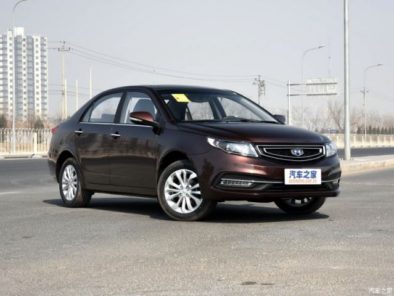 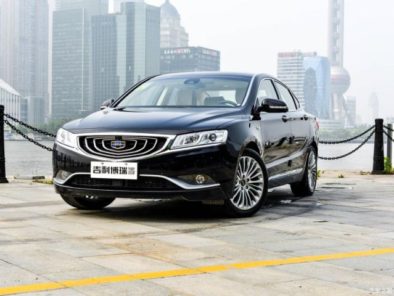 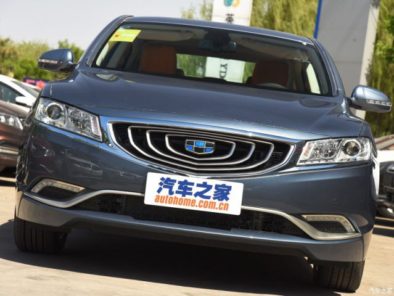 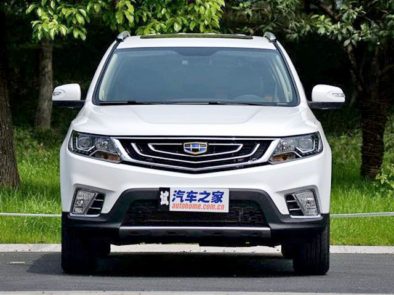 And the concentric rings, especially on the Bo Rui GE, are not just receding inwards, they go back into the car – you get this impression that your eyes are being led away and into something beyond. It was a great signature, and nobody else does it. You might say of course, it looks strange. I don’t think so, i think it has given us a unique look, instantly.

Some people translate it like a leaf dropping into a lake, and the ripples expanding away. I don’t mind if that’s what they see because it’s a nice image as well.

On the Geely Concept Icon

PH: That’s Geely getting confident. We’ve spread the Geely look on five or six vehicles, so we’re starting to show people what Geely is. It’s now a respected brand where five, six years ago it wasn’t quite so well regarded. Now it’s a major brand. 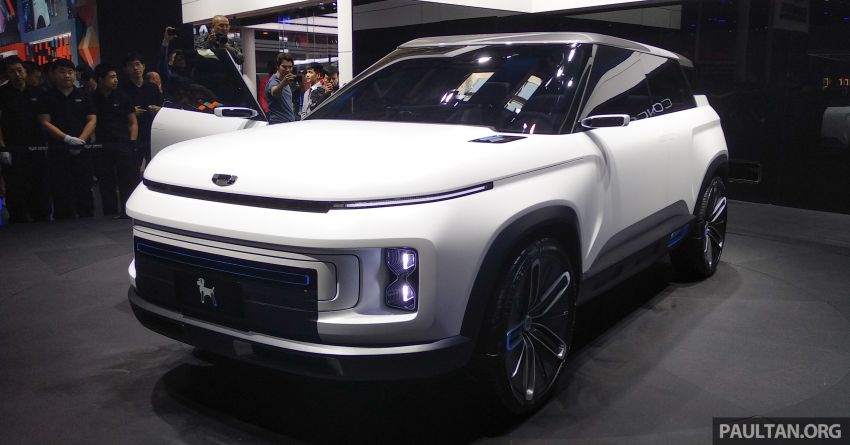 I think we now have the room to breathe and we can start being a little more experimental, more adventurous. The steps we took between the first cars were fairly small steps, because when you try to either build a whole new brand like Lynk & Co or recharge a brand like Geely, you have to make people recognize the brand over a number of vehicles in order to get the message across. Once you’ve done that, then the steps between each model can be a little bigger.

This (Concept Icon) is our first venture away from what we were doing. We’ll continue on those cars (existing design), but now we’re looking for another customer, somebody we probably haven’t met before – and that’s what this car will do.

We’ll have another car, based on the same platform, similar size, an SUV, but looking totally different, and that will be something for the customers to move through, into the Bo Rui (Geely’s flagship sedan) eventually. This one will start the new wave of vehicles.

On Proton’s design team and its role

PH: That’s not all they’re going to do, make Geelys. I was in the studio on Monday looking at the next wave of Protons. We’ll be helping them. They have a design team as you know, and we’ll do a lot more together so that they get to see they got more resources at hand if they need them.

On his vision for Proton Design

PH: Well, that’s going to be interesting because if they’re going to make any Geely products then there’s a specific look, but I think we would like to keep a unique look for Proton as well, to develop that. I cannot tell you everything I know, but certainly we have a Proton brand to take care of and develop. I have to be honest, I don’t know an awful lot about your culture but it would be a shame if we can’t tap into that and bring that to life in our cars. I’m a great believer in reflecting your place of origin in a product; it adds something unique, something exotic into a car.

For Volvo I said ‘we are Swedish, we should look Swedish’. How do you do that, translate that into sheetmetal. Well, we did. When I worked at Ford in America, they were doing all sorts of different things and I said ‘come on guys, you must be proud to be American.’ I said if there’s one thing you guys have, you Americans all have great teeth and you’re outward going.

So we did series of cars with three bar chrome grilles – the Edge was perhaps the maximum version of that when we did the facelift – and all those cars have the signature great teeth on them. That got attention.

So, coming back to Malaysia, what do we do, and how can we tap into that? I find it disappointing if designers working in a separate culture like China and Sweden don’t have a certain pride in history of art and design – we’re not going to put pagoda roofs on Geelys, but you’ll start to see a little more of China in Geelys. And let’s see what we can do in creating a bit of pride in Proton. 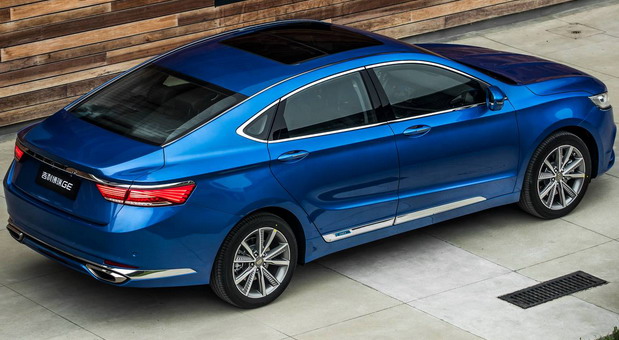 The Geely BoRui’s design was inspired by a cheetah in motion..

Where does this car come from? I can see that it comes from there. I’m a supporter of trying to reflect an identity of a culture or country in a product. It creates something exotic. Range Rover, couldn’t come from anywhere but Britain, for example.

It’s all part of a big picture of having to manage all these brands and create some differences between them, while sharing an awful lot of the technology, platform and dimensions – it’s only design that can create that differentiation.

On the culture and willpower at Geely

PH: I think the biggest change in Geely is not just design and the look of the cars. If you open the door of the Bo Rui you’d be astonished at the perceived quality of everything – the tightness, the fit and finish. The guys in engineering, they’ve really worked hard. Go look at the car’s interior – I think you could say that you wouldn’t get much better in a BMW.

The seriousness and speed of things being done is astonishing. I was still working on a car – the Bo Rui in the studio – still a clay model but in the later stages of refinement. I went to the factory for another project, and as I was crossing between buildings, I was almost run over by a Bo Rui! I thought, how on earth have they done this, it’s still a clay model and yet they’re driving it around already. That’s the difference between Europe and China – nothing’s impossible. 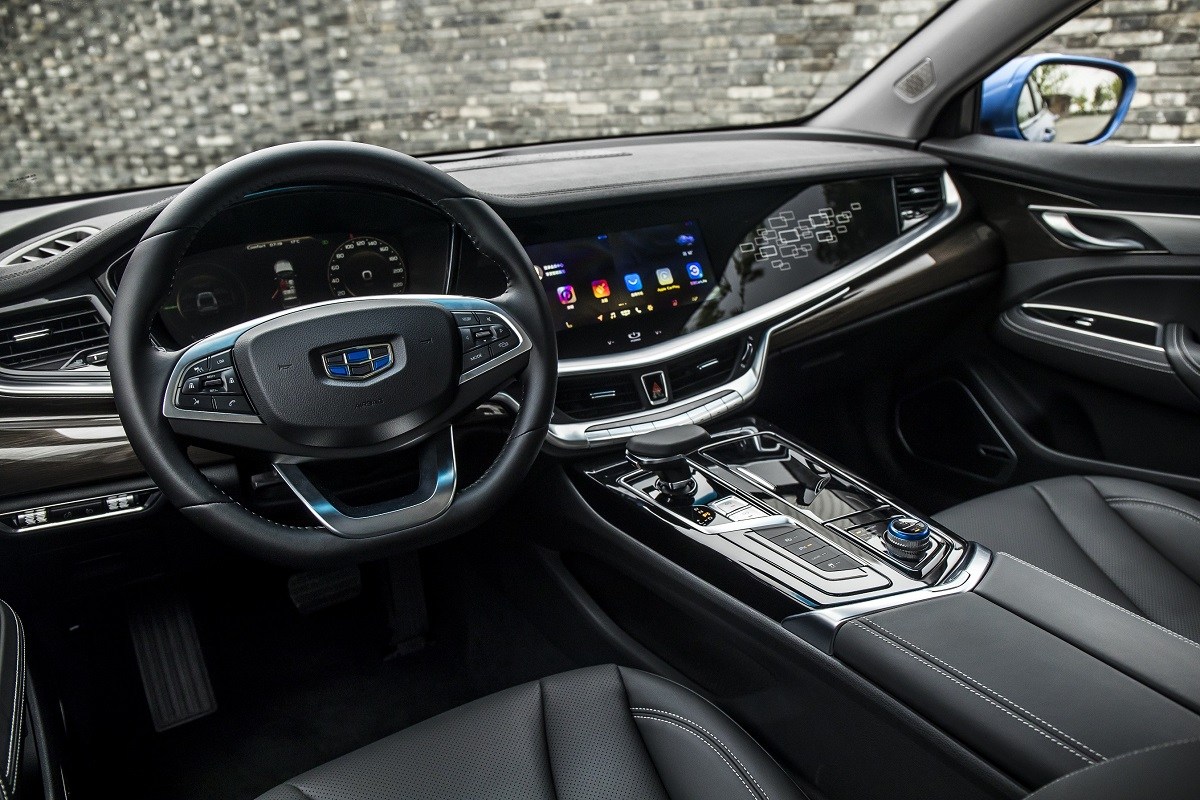 It’s like when you used to do school mental arithmetic and the question is: If it takes 10 men a week to dig a 10m x 15m x 4m hole, how long does it take a million men? We have a million men!

It’s an attitude that astounded me. The speed and the willingness to try – we will try and get this – and the Bo Rui’s interior reflects that. The center screen was a nightmare for the engineers. We could have just done a separate flatscreen but look at that (the ‘hidden’ screen) – it’s beautifully done, and it took a lot of effort and a lot of engineering talent to do that properly. I’m very impressed by my colleagues in Geely.

Quality has gone alongside design to create the new phenomenon which is Geely’s 1.25 million per year sales. It’s noticeable.