Geely’s newest sedan, the Preface has finally made its debut at the ongoing 2020 Beijing Auto Show in China. Named as Xing Rui for the Chinese market, the Preface sedan rides on the award winning Compact Modular Architecture (CMA) platform co-developed by Geely and Volvo.

Related: Geely and Volvo Planning for a Merger

The Preface sedan was first previewed as a concept at the 2019 Shanghai Auto Show where it was widely praised for its highly balanced design language that was created by Geely Design, the global network of design studios operated by Executive Vice President of Design, Peter Horbury who was formerly the design head at Volvo & has been leading Geely designs since 2011. 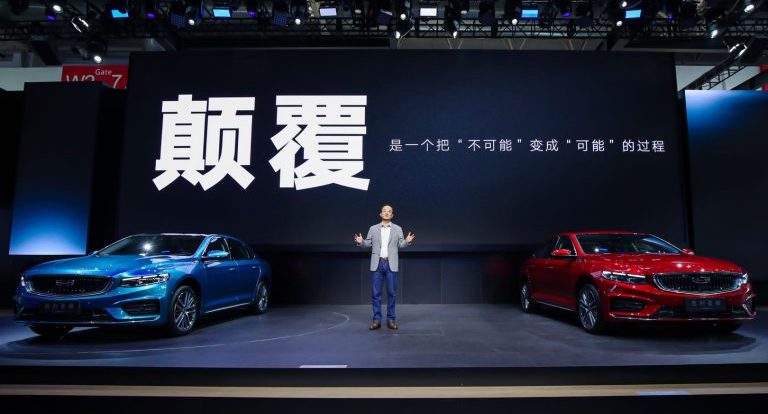 According to the President of Geely Auto An Conghui:

“The Geely Xing Rui marks a new journey for the Geely Auto brand as it brings CMA technologies into the sedan segment, perfectly maintaining Geely Auto’s balance in both SUV and sedan segments. The Preface is a disruptor which makes no compromises in terms of quality, design, technology, space, and value.”

Geely says the Preface is the first vehicle of Geely’s 4.0 era– with the fourth generation of its vehicles being based on advanced modular architectures that allow for leading levels of connectivity, intelligence, and quality that include safety as a standard.

In terms of dimensions, the Geely Preface measures 4,785 mm long and 1,869 mm wide, with a 2,800 mm wheelbase. For the sake of comparison its 100 mm shorter than the current Toyota Camry, but is 29 mm wider. According to Geely, the new Preface sedan is one of the biggest, most spacious vehicles in its segment, with emphasis on rear passenger comfort and leg room.

Under the hood, the Preface gets a 2.0 liter turbocharged direct injection engine coupled with a 7-speed dual-clutch automatic gearbox delivering 190hp of power and 300Nm of torque. Geely says that the use of CMA gives the sedan a new level of sophistication in terms of interior space, NVH levels, economy, and performance. Geely also claims a “highly intelligent super brain connected to the cloud” for the Preface’s infotainment system, which will get over the air (OTA) updates which “enables the car to continuously evolve and never become outdated”.

The minimalistic yet impressive interior gets dual-toned dashboard is dominated by a large 12.3 inch central touchscreen infotainment unit that displays all vehicle functions, plus there is another 12.3 inch digital instrument cluster located in front of the flat-bottomed multi-function steering wheel.

With the latest CMA-based Preface sedan, Geely intends to challenge the prestigious German brands which means that the Preface won’t just be limited to China but will be reaching key markets across the globe. Sales in the Chinese domestic market are set to commence in coming months. Stay tuned to CarSpiritPK for more information.