Honda Atlas has officially launched the BR-V 7 seater SUV in a launch event held in Lahore.

“The decision to introduce Honda BR-V in Pakistan is primarily to cater big families and diverse roads of Pakistan.”

The BR-V will be available in two grades with prices as follows:

Looks-wise the BR-V is more in line with the Honda City having a thick chrome slat dominating the front grille. The rectangular double barrel headlamps are decked up high with the grille to give it the SUV stance. The front bumper gets a silver accent bash plate on its lower side and also houses the fog-lamps and a mesh grille. Black cladding skirts the BR-V from all sides while there are horizontal tail lamps connected by the reflector strip, rear spoiler and a bash plate at the rear.

Although the BR-V is a stripped down version compared to international models, Honda Atlas hasn’t cut much in the local variant of the 7-seat SUV. BR-V is equipped with an Engine Immobilizer, Driver side SRS Airbag and ABS with EBD. The i-Vtec S grade also comes with built-in multimedia navigation while the feature is optionally available in the standard i-Vtec variant.

BR-V also offers steering wheel controls, the A/C controls comes as touch buttons unlike the local Honda City which has manual knobs. Rear A/C vents ensures that those sitting at the very end can still have a good traveling experience. The BR-V features nice comfortable seats while the third row is easily accessible thanks to the adjustable second row seats. The third row seats also come with 50/50 split functionality to extend the spacious boot space.

BR-V comes equipped with a 1.5 liter engine mated to a CVT gearbox, and boasts a claimed fuel economy of 16 kilometers in a liter. The engine develops 118bhp and 145Nm of torque. 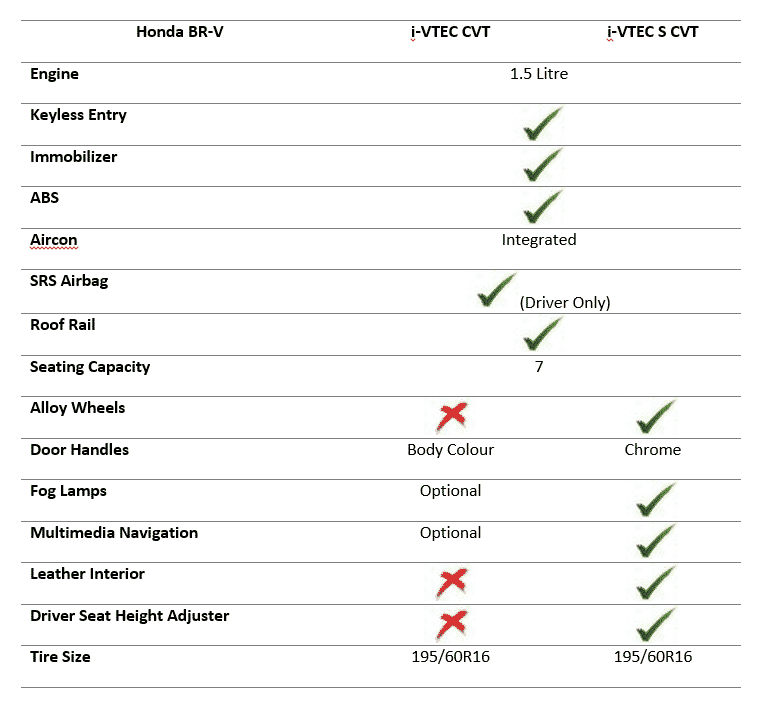 Although 7-seaters haven’t seen much success in our market, as evident with examples of Toyota Avanza, Suzuki APV and the FAW Sirius, the BR-V may catch a good number of buyers because of a strong marketing campaign by Atlas Honda and the price vs features of the BR-V.

Compared to the above the BR-V is cheaper than the APV (2,418,000) and Avanza (PKR 2,999,00) and offers much more than the above two both in terms of equipment as well as visual character, thus has a higher chance of getting successful in the market.