The new Honda Civic 1.0T model for the Chinese market, made its debut at the 2016 Guangzhou Auto Show last week. The Civic 180Turbo made by the Dongfeng-Honda is available in two Comfort Edition variants, one with a manual transmission and the other with a CVT.

The Civic 1.0T is identical to the Chinese domestic 1.5 liter turbo version in terms of looks, with minor detail changes. The 1.0 liter model makes do with halogen projector headlamps, and rides on 16-inch wheels and 215/55 profile tires as opposed to the 17s seen on the higher spec examples of the 1.5 liter, which is badged as a 220Turbo in China. 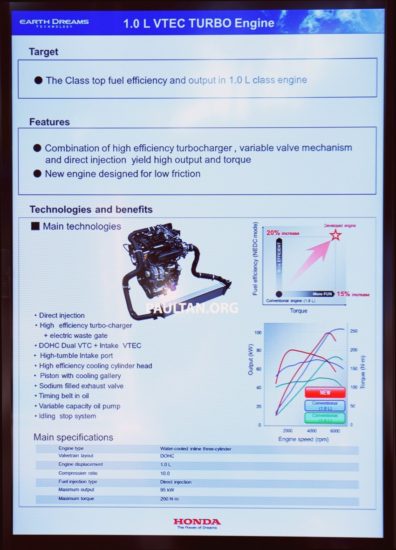 The 1.0 liter VTEC turbo engine is essentially the Earth Dreams Technology unit that was first showcased at the 2015 Honda Meeting in Japan. At that event, rated power output for the three-cylinder turbocharged unit was 127 hp and 200 Nm, but its application in the 180Turbo sees a minor reduction in output numbers. The P10A1, as the unit is known as, offers 123 hp at 5,500 rpm and 173 Nm from 2,000 to 4,500 rpm on the Chinese Civic.

The price of the 1.0 liter Civic Turbo will be announced soon and will be officially go on sale  in China by early 2017.