Japanese automaker Toyota is often criticized for being against the EVs (electric vehicles), blocking climate policy actions worldwide, dubbed as the worst carmaker for emission efforts by Greenpeace and is entitled as the world’s third-most obstructive organization for lobbying governments that set climate policies. Toyota chief Akio Toyoda on a number of occasions have shown his displeasure over the EV revolution, and has also criticized Japanese government for its push towards EVs.

However a recent article that was published by Electrek, which was in fact a letter sent to the Electrek by a concerned Japanese resident who wishes to remain anonymous, tells us how Toyota is spreading an anti-EV propaganda in Japan, wanting to make Japanese people believe hybrids are better than EVs. Have a read:

Remember the first electric Toyota RAV4? Probably not. The early attempt at an EV barely had a range of 100 miles and Toyota sold very few of them. Back in 2010, Toyota and Tesla jointly worked on a second RAV4 EV project and Toyota had invested $50 million in Tesla, which it sold in 2017 (and which would now be worth $20 billion had they not sold it).

The whole ordeal left a bad aftertaste in M. Toyoda’s (Chairman of Toyota) mouth and he since has taken a very public anti-EV position worldwide. None of this news is new, but the situation in Japan has recently been quite tense and the companies and government are scrambling to slow the adoption of EVs in the country and abroad.

The main reason is simple. Jobs. Japanese manufacturers buy parts from small family-owned businesses across Japan. Toyota has only about 70,000 employees in Japan but are indirectly responsible for the income of far more Japanese and foreign workers in Japan. It is well-known in the Japanese car industry that their record profit business model is based on the sweat and tears of hundreds of small underpaid parts manufacturers in the country.

Now here’s where the story turns even more sour. In December 2020, the Japanese government announced the ban of gasoline-powered cars by 2030. The backlash from JAMA (Japan Automobile Manufacturers Association), which is headed by none other than M. Toyoda himself, was immediate. The government later retracted its statement and now aims for a mix of gasoline/hybrids, EV, and fuel cell vehicles by 2035. Gasoline hybrids (HEV) and plug-in hybrids (PHEV) are very much powered by fossil fuels and therefore not carbon neutral by any means. But hybrid vehicles are the most complex vehicles with up to over 30,000 parts that need to be built and maintained.

And so here we are in late 2021 and the milk has curdled. Just as Japan receives a “fossil of the day” award at COP26, JAMA, hand-in-hand with the Japanese government, has started disinformation campaigns and heavy promotion of hybrid, not 100% electric vehicles. There are increasing amounts of pamphlets, posters, books, and commercials that boast gasoline hybrids as the future. EVs are increasingly singled out, attempting to paint them as more polluting than gasoline hybrids.

For me, as a parent of three children who attend elementary school in Japan, I was appalled at learning that Toyota had sent pamphlets to all Japanese schools explaining about their company and its products. In the pamphlet they explained about FCEV, HEV, PHEV – but not BEVs (battery electric vehicles). Kids learned that Toyota uses parts from an enormous amount of smaller companies across the country and put pictures of the friendly workers that build these cars. 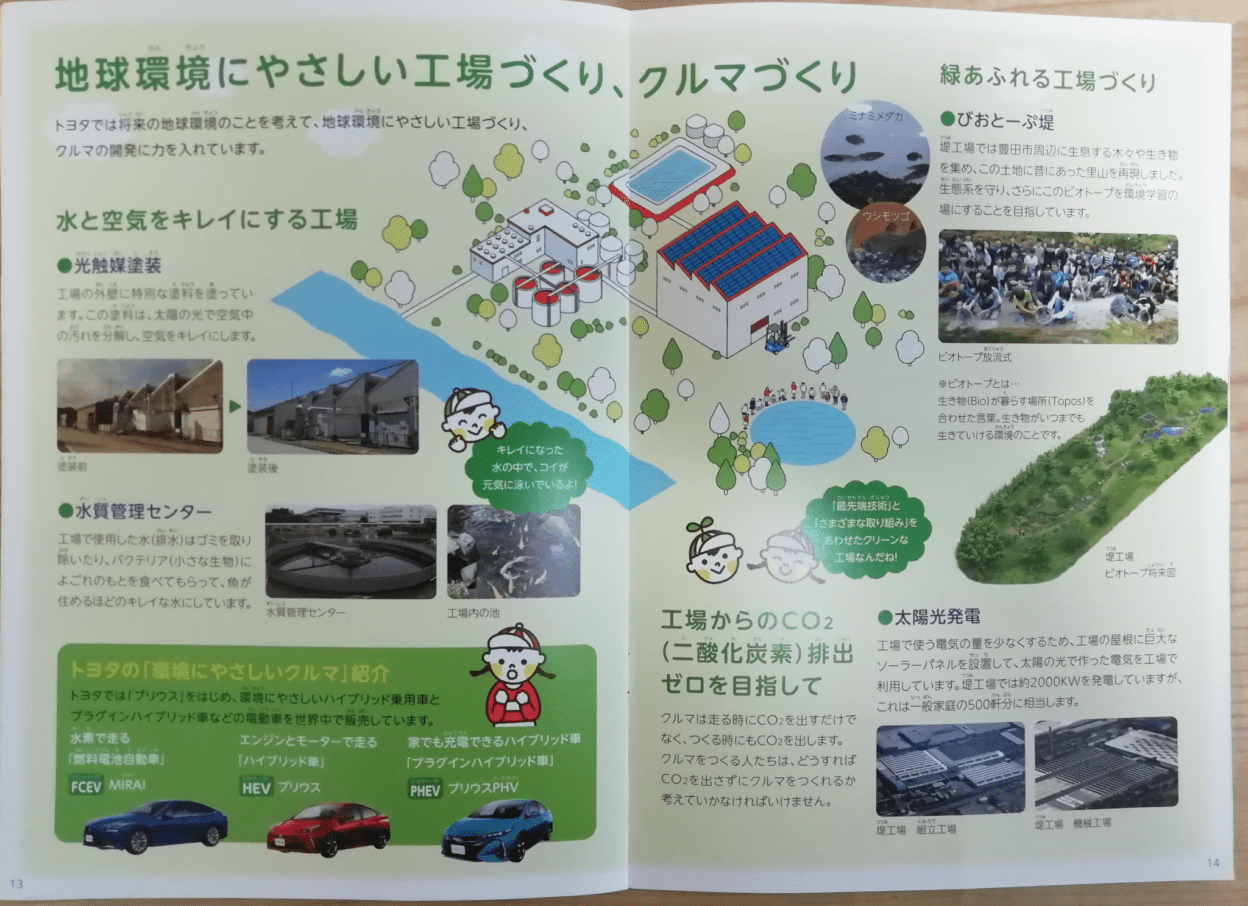 After the social studies class, my daughter asked her teacher, “Why is there nothing about EVs?” His reply was, “Hybrids are eco because they use half the gas.” No mention of EVs whatsoever in their pamphlet.

Toyota’s playbook is very clear. First, make the Japanese public believe that BEVs (the only real EVs that don’t use fossil fuels) don’t exist yet. Confusing the public with different acronyms that contain the word EV is misleading at best. Convincing children that they don’t exist is crossing the line. In many countries around the world it is illegal to air publicity aimed at children. It’s too easy to influence their minds.

Most Japanese car manufacturers are using this strategy. Nissan has its e-power, Honda e:HEV, Subaru calls it e-boxer. Only Mazda doesn’t hide the fact that its whole lineup is pure gasoline except for the electric MX-30.

The second part of their playbook is to show that Japanese workers will lose their jobs. Firing someone is very taboo and an absolute last resort thing in Japan. By showing all the hard-working people that come into the construction of a car, they seek to make it unimaginable for workers to lose their jobs in the transition. 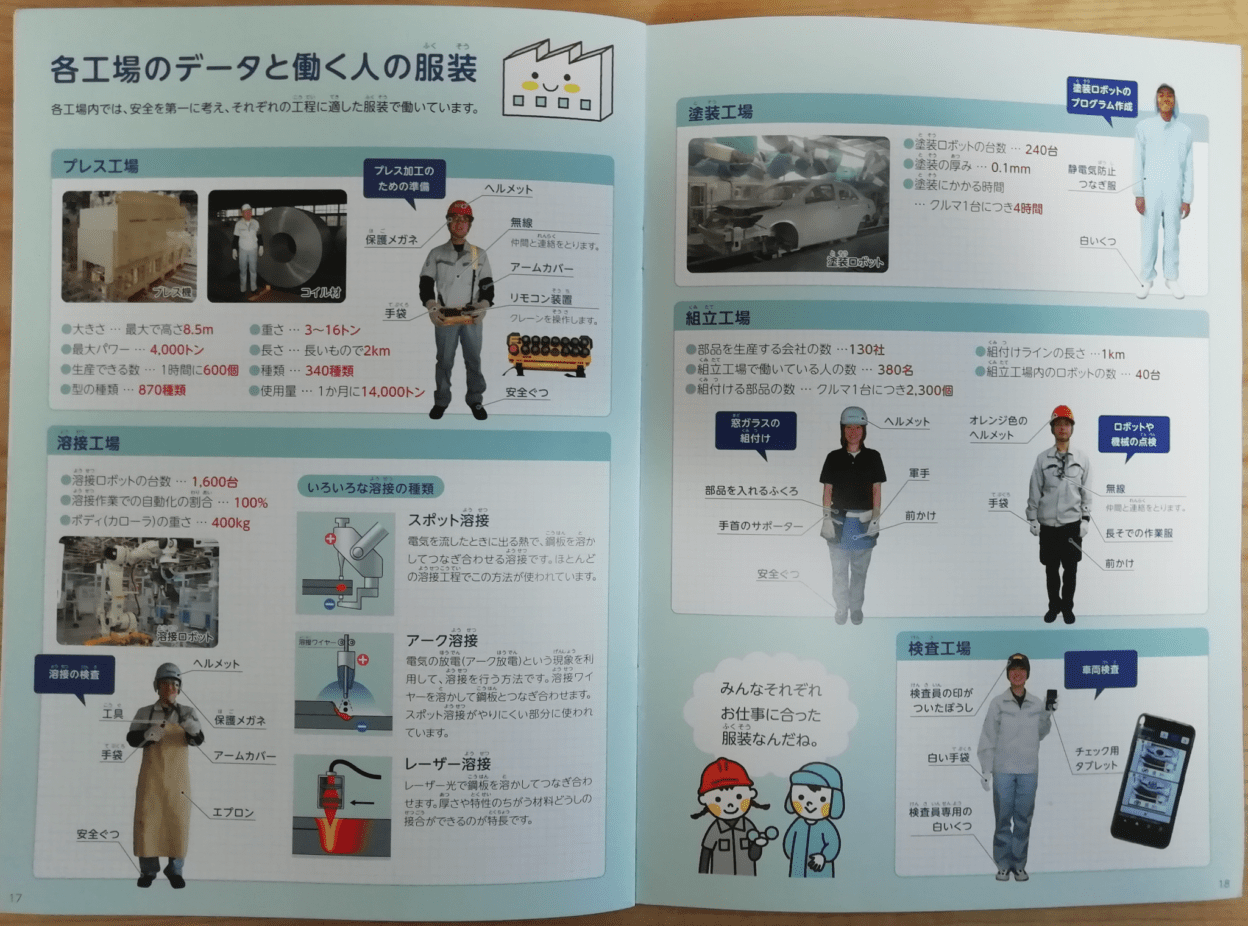 This feeling that hybrids are the best is widespread among many ages in Japan, from teenagers to elderly people.  The glorification of hybrids can be seen everywhere in Japanese society. Walking through the municipal library I spotted a book put on display about hybrids. In the municipal and prefectural monthly pamphlets the situation is the same. A large section is reserved for hybrids and EVs get a tiny corner explanation.

The town where I live, in the heart of Kyoto prefecture, has announced that all public worker vehicles (not including buses) will be electric, or hybrid, by 2040. Again, the notion that hybrids are as clean as EVs is present at the municipal level.

Similar promises of a gasoline hybrid future can be found throughout Japan. The will to get rid of fossil-fuel-powered vehicles just isn’t there. Putting fossil-fuel hybrids at a status higher than EVs is not the only issue. Disinformation about the supposed un-recyclable nature of batteries, more polluting production processes, and emissions from charging are also rampant. The public broadcaster NHK also features the extremely rare battery fires as worthy news. This influences public perception. 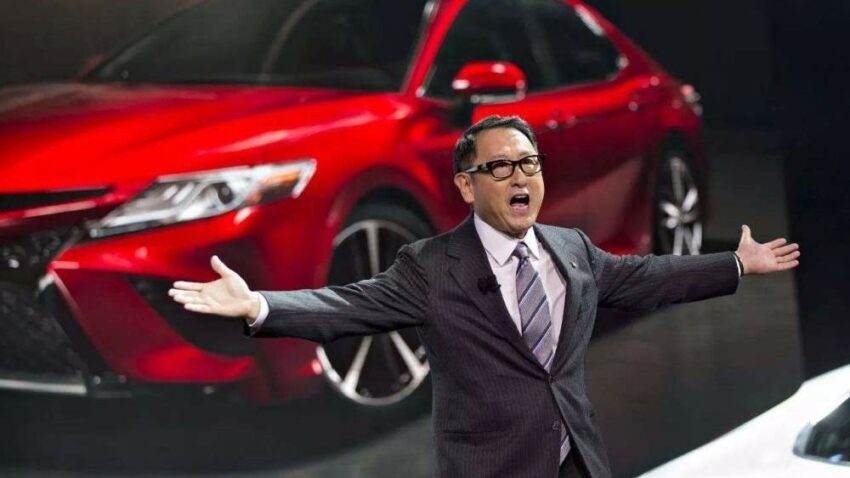 M. Toyoda has claimed that without a clean electric grid in Japan, electric cars pollute more. Here’s the situation of clean energy in Japan.

Before the 2011 Fukushima nuclear disaster, much of Japan’s electricity came from nuclear. As public pressure to close these dangerous plants mounted, the government scrambled to adopt solar energy. In 2013, utilities gave out very lucrative 20-year contracts at 36yen/kw to whoever would take on the task of building solar energy. However, the higher cost of this clean energy was added as a tax to all Japanese citizens’ electric bills. Public backlash ensued. The solar contracts became cheaper and cheaper and now the major utilities don’t even make such contracts anymore. A whole new generation of small clean energy companies has appeared, but there is little physical space in Japan for solar energy.

Meanwhile, in the wind energy sector, progress was very slow until 2020. The media had focused on a broken wind turbine during a typhoon in 2018 and that had scared the market. Fortunately, things finally seem to be ramping up in the offshore wind farm sector.

It is also important to note that Japan is one of the most seismically active countries, and with seismic activity comes geothermal energy. Unfortunately, most of the volcanos and thermal vents are either in nature reserves or have onsens (hot spring baths) close to them. It’s impossible to build in the natural reserves because of regulation. The federation of onsen owners is also quite strong. They believe that geothermal plants would divert their precious heated water away from the baths. This is not accurate, as geothermal energy is taken from much much deeper underground and would not influence the hot springs.

The electric grid in Japan is getting cleaner every day. M. Toyoda’s argument is already not valid. The government is actively funding clean energy projects, house batteries and yes, EVs and unfortunately, PHEVs. 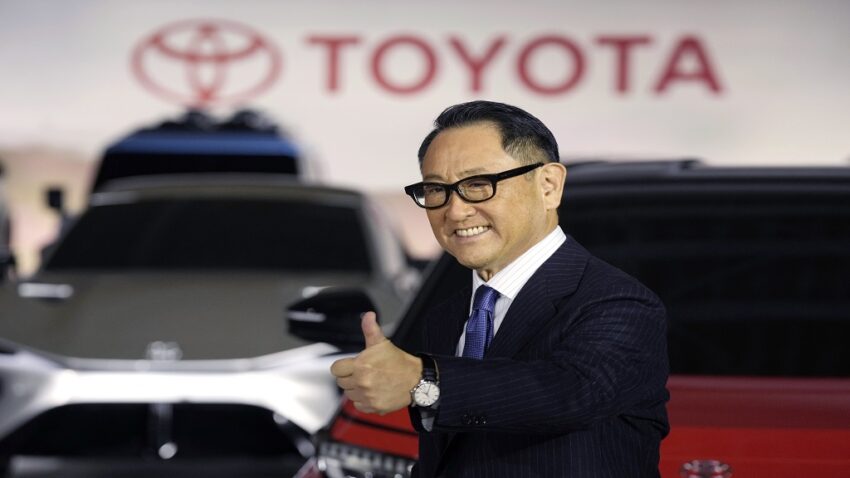 When Toyota first invested in Tesla, M. Toyoda had said that he admired the risk-taking attitude of the then startup. The old leaders of the Japanese industry need to wake up and do as Honda has done. They have replaced their president with their former head of R&D, Toshiro Mibe, the man who spearheaded the development of the Honda e.

Aggressively build a supply chain of 100% electric cars now. Involve the whole Japanese car industry and give up gasoline. The small suppliers along your chains must be told to evolve and provide different products. You have already lost face. Now you can either pick yourself up, rebuild your reputation as a 100% pro-EV company, or quit and let someone who is more nimble make the transition. Change is inevitable. Stop trying to slow down the tide. Tomorrow, we can all be better versions of ourselves.

–A concerned parent in Japan