In July, Hyundai showed off two exciting “rolling lab” concepts at its N Day 2022 presentation to demonstrate its “ambition to become a leader in the zero-emissions future.”

One of the two concepts was the N Vision 74. It’s inspired by the futuristic N 2025 Vision Gran Turismo and Giorgetto Giugiaro-designed Pony Coupe concept from 1974. It wasn’t just a stationary concept design standing at some stage to awe the audience from its appearance. Besides its striking looks, the car is actually able to perform with lots of performance numbers to back.

Hyundai recently invited a select group of renowned motoring journalists from around the world to experience the N Vision 74 on a dedicated test track. After all the concept vehicle is not just about how it looks, but rather its an effort by Hyundai to push boundaries, and that’s what it aims to demonstrate. The N Vision 74 features a hydrogen fuel cell hybrid system having two tanks under the rear window that carry a total of 4.2 kg of hydrogen which is fed to an 85-kW fuel cell stack at the front of the vehicle. The energy generated by the fuel cell stack is sent to charge an underfloor-mounted 62.4-kWh lithium-ion battery and takes just 5 minutes to get them topped up if the tanks are depleted. 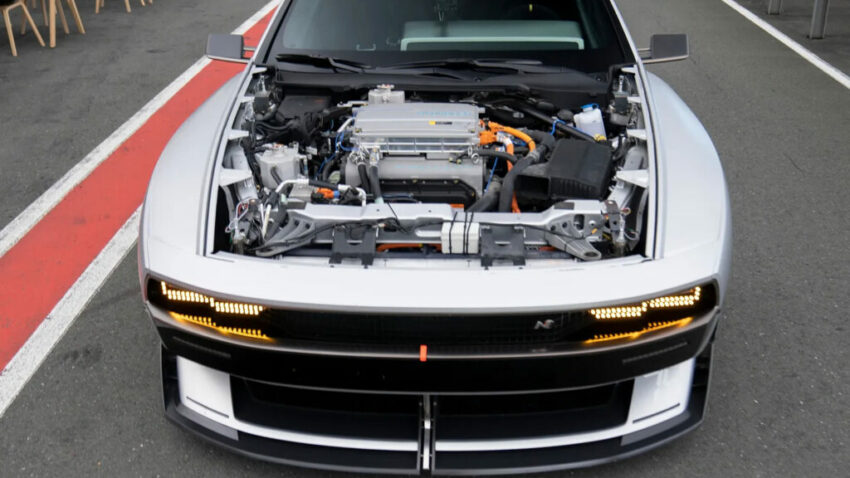 Albert Biermann, the BMW M-Division development boss who went to Hyundai and ultimately became R&D head for the entire group, although now retired to become officially the executive technical advisor, says about the N Vision 74 with a broad grin—“It’s a Stinger.” He goes on to explain the development as:

“The original idea was for a Genesis-branded project, with four Stingers modified to trial a new powertrain that combined a 62.4kWh battery pack with an 85kW fuel cell, power then reaching the road through twin rear motors, one powering each wheel. The project’s main role was to help manage the tricky relationship between each side of the back axle. We developed a virtual differential by software control, and that’s a huge challenge for our engineers. But at some point, we might consider that for a special car needing more power than our modular system can provide with one motor for each axle.” 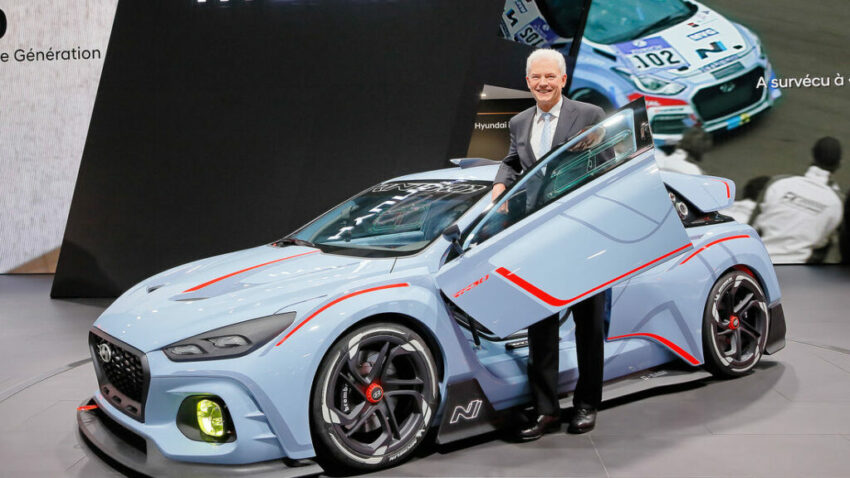 The fuel cell, which comes from the existing Hyundai Nexo basically serves as an on-board generator to diminish the rate at which the battery charge falls by. With the combination of a fully-charged battery pack and 4.2kg of hydrogen in the twin rear tanks, the N Vision 74 has a claimed range of 595 km. 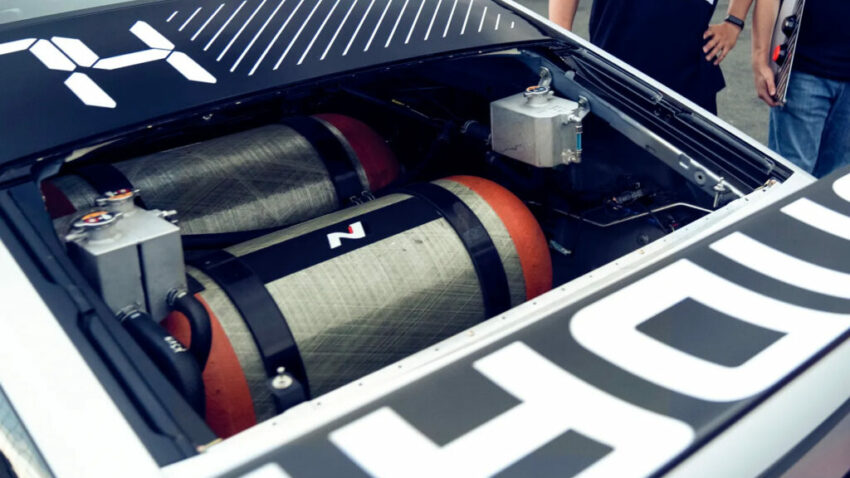 Hyundai claims 0-100km/h sprint time of just under 4 seconds. With immediate responses and no sense of mechanical inertia, the N Vision 74 drives like a pure EV, according to the journalists who experienced the car on the track. However they said the aural drama is missing. The soundtrack is one of rushing wind and the noise of the battery of cooling fans that work flat-out to keep temperatures in check. Since the car was running on road-spec Pirelli P-Zero 4S tires, and weighs around 2,000 kg according to Hyundai engineers, the N Vision also felt obviously heavy under braking.

Biermann said the first version of the virtual differential “felt scary to be honest”, but the system has been tuned to the extent there were no obvious clues that the rear wheels were linked by nothing but software. Torque vectoring across the back axle is helping the N Vision 74 to turn, but almost invisibly. 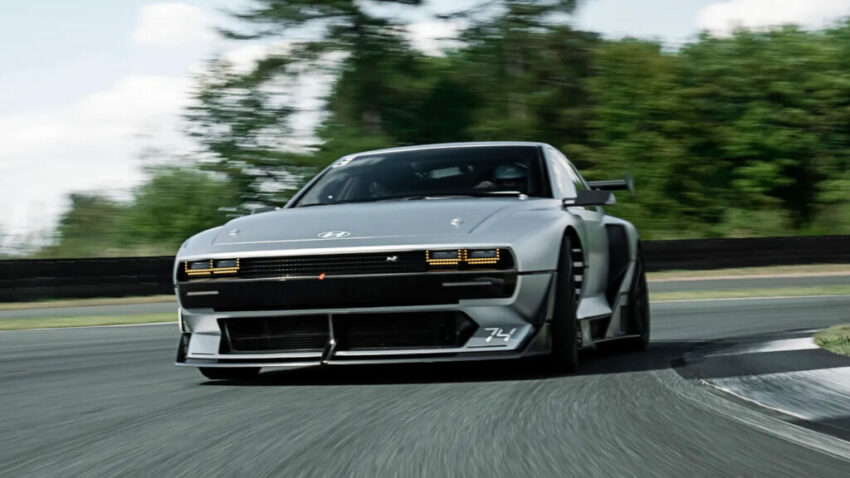 All of this is huge fun, even if it is very unlikely that a production version of the N Vision 74 will come to fruition. Insiders say that the company’s E-GMP platform’s use of an underfloor battery pack means it couldn’t be used for a low, sleek coupe without huge modification. And while Hyundai is still serious about hydrogen, the N Vision 74’s fuel cell is only a relatively small part of its powertrain – although one that does offer the prospect of blended long-range propulsion. 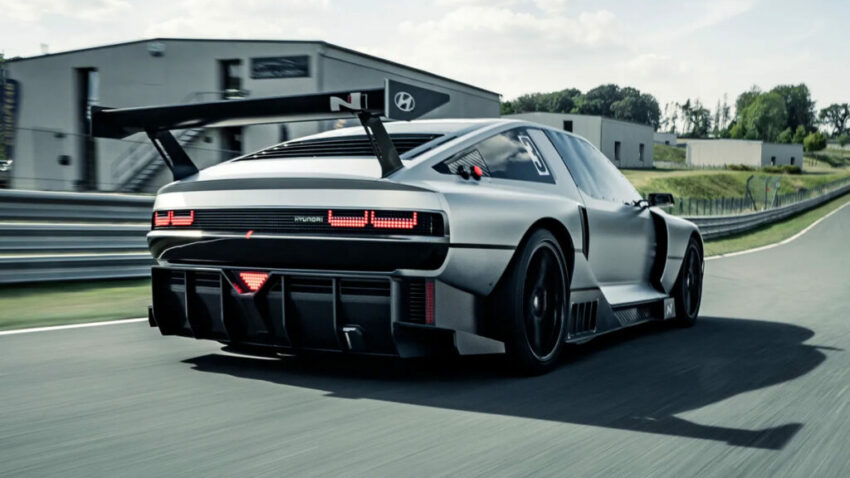 However the most interesting takeaway is that Hyundai is actively considering a future where it requires the extra power, and dynamic freedom, which come from using more than one electric motor per axle. This is significant when you consider that Hyundai’s most potent existing EVs – the Kia EV6 GT and forthcoming Hyundai Ioniq 5 N already have 570hp. For Hyundai, clearly that’s not enough.