Japanese automakers including big names such as Toyota, Nissan and Honda are least prepared for a zero-emissions vehicle transition compared with their global competitors, according to research report released by climate think tank InfluenceMap.

By 2029, just 14% of Toyota’s worldwide production is forecast to be battery-electric vehicles (EV), rising to 18% for Honda and 22% for Nissan, according to the study, which is based on an examination of future production data from IHS Markit. Compared to this, South Korea’s Hyundai, is forecast to achieve 27% EV production levels globally by 2029 while Ford and Volkswagen, at 36% and 43% respectively. 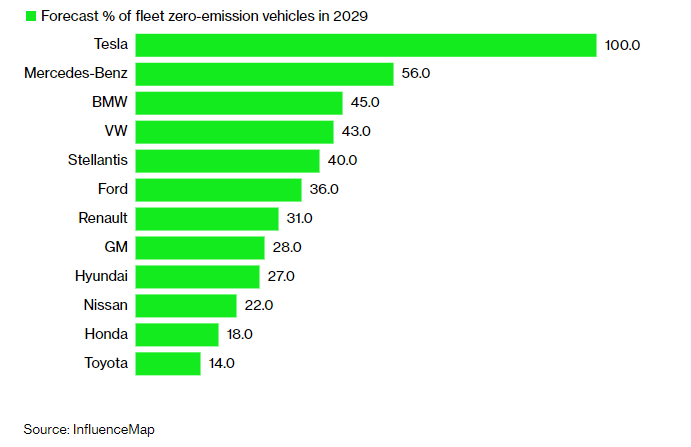 Japanese automakers have lagged behind global peers in rolling out electric cars and the country’s EV penetration rate is barely 1%. However Honda recently said it has budgeted 5 trillion yen (S$54 billion) over the next decade to make cleaner cars while Subaru has said it will spend around 250 billion yen on EV battery capacity over the next 5 years. Meanwhile Toyota, and the Japan Automobile Manufacturers Association (JAMA), which is chaired by Toyota, continue to promote hydrogen as one of the key solutions to carbon neutrality, along with electric cars.

However, the study has found that across all automakers, hydrogen-powered vehicles are forecast to account for just 0.1% of global production by 2029. InfluenceMap program manager Ben Youriev said:

“The fact that Toyota and Nissan are the two lowest-scoring companies highlights the strong link between negative climate policy engagement and low levels of electric vehicle production forecasts. In Toyota’s case, it continues to strongly push combustion-engine powered hybrids – even in highly developed markets like Japan and the US – despite recent warnings from Intergovernmental Panel on Climate Change scientists that electric vehicles powered by low-emissions electricity offer the largest decarbonization potential for land-based transport on a life cycle basis.”