Toyota launched the TNGA based Corolla Cross in June last year starting from Thailand and the crossover was subsequently released in various markets and even reached the U.S. shores earlier this year. However the vehicle was yet to be introduced in its home market– Japan.

Now the Corolla Cross is set to make its debut in Japanese Domestic Market (JDM) but will carry a different look from what we see in the rest of the world, including Pakistan. As can be see in the pictures below, the JDM Corolla Cross gets a fascia that features a smaller upper grille flanked by redesigned LED headlamps. Meanwhile, the lower apron gets a huge air intake accompanied by a mesh insert and fog lamps placed into the corners. Also there is a redesigned bumper that no longer comes with pronounced creases towards the front wheel arches. 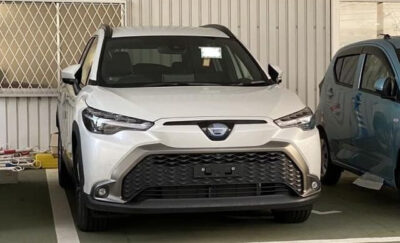 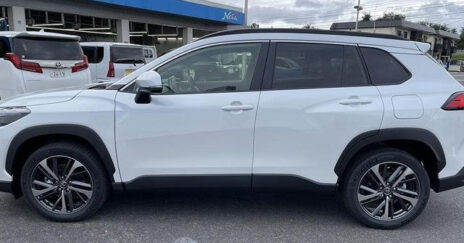 The front-end also carries the emblem that’s specific to the JDM Corolla range. There isn’t much change towards the side apart from different set of alloys whereas the back gets a set of restyled rear combination lamps and bumper with silver embellishments. Currently there is no official word on the powertrain options the Toyota Corolla Cross is going to get in the JDM market. However the blue emblem suggest a hybrid likely carrying the 2ZR-FXE 1.8L engine with 98 hp of power and 142 Nm of torque that is paired by an electric motor rated at 72 hp and 163 Nm for a combined system output of 122 hp. Power will be sent to the front wheels via an e-CVT as known.

Toyota introduced the Corolla Cross in Pakistan earlier this year which gets the same design treatment as seen in international variants. However since JDM cars always end up coming in our market, we can expect the JDM Corolla Cross to arrive here soon which will surely stand out from the one being offered by Indus Motor Company. So which one do you find more appealing? The Corolla Cross we have here, or the one that is set to go on sale in Japan? Let us know with your comments.