Crossovers SUVs are the fastest growing vehicle category in global automobile market, with sales constantly on the rise. In recent times the crossovers SUVs have become so popular that analysts believe they will overtake sedans (currently the most popular category) in terms of sales volume in near future, while they have already done that in certain markets.

So how did it all started and why automakers around the world began tapping this segment which remain untouched for so many years. Well according to industry pundits, the car that’s widely considered to have sparked the compact crossover frenzy back in 2010 is none other than the Nissan Juke.

Since then, Juke’s popularity has prompted almost every manufacturer to develop practical, affordable and stylish alternatives to compete at the Juke’s size and price point. 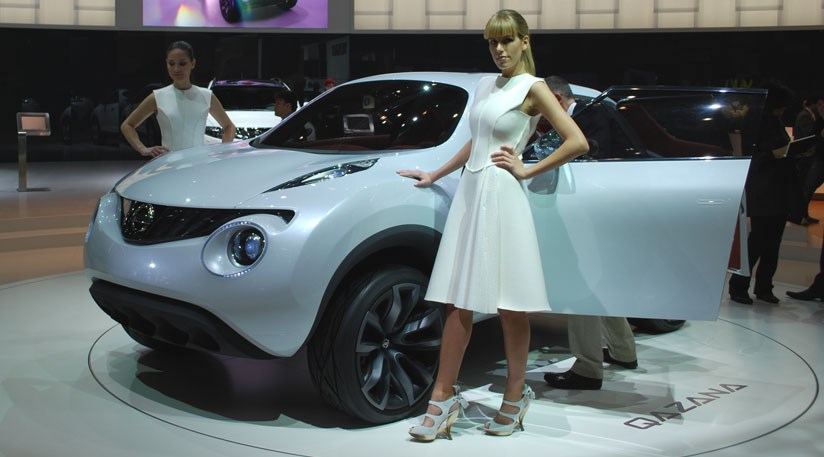 It first appeared as the Nissan Qazana concept at the 2009 Geneva Motor Show. However, the production version of Nissan Juke made its debut a year later at the 2010 Geneva Motor Show and was first introduced to North America at the 2010 New York International Auto Show to be sold as 2011 model. The name “juke” means to dance or rapidly change directions demonstrating agility. 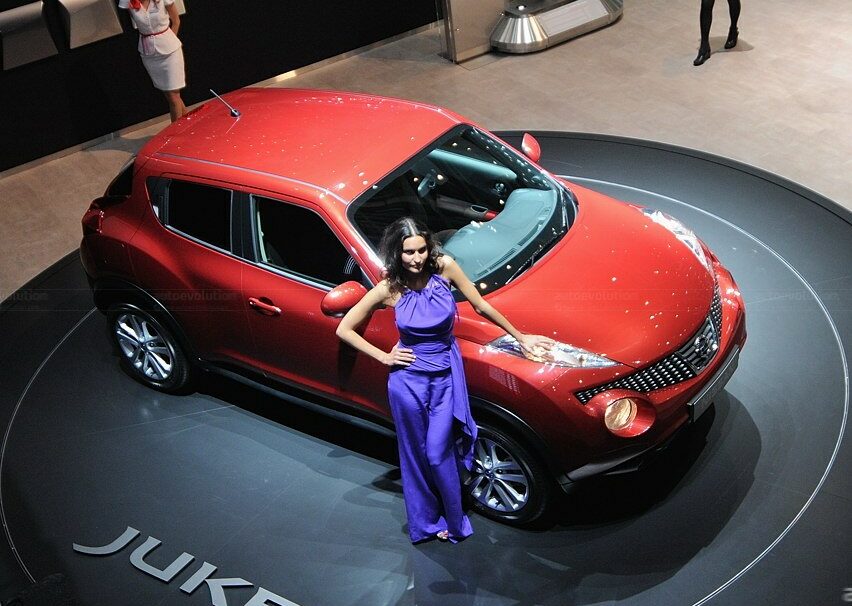 The unusual yet catchy profile was dominated by prominent wheel arches, high waistline and slim side windows with glasshouse resembling a crash helmet visor. A coupé-like appearance was achieved by the rear door handles positioned near the C-pillars within the window frame.

The fascia featured a stacked array of lights. Running lamps and indicators were mounted on top of the front wings, with their lenses visible from inside the cabin as an aid to maneuvering. Below them, under the lower edges of an expansive curved grille, the main headlamps were intended to be reminiscent of those fitted to rally cars during the 1960s and 1970s. Whereas fog lamps were situated on a third level within the sump guard at the bottom. Like exterior, the interior styling of Nissan Juke was innovative. It featured 60/40 split rear seats that could be folded down independently in order to carry larger objects. Though the rear cargo area was small but featured additional storage beneath the floor in front wheel drive models. 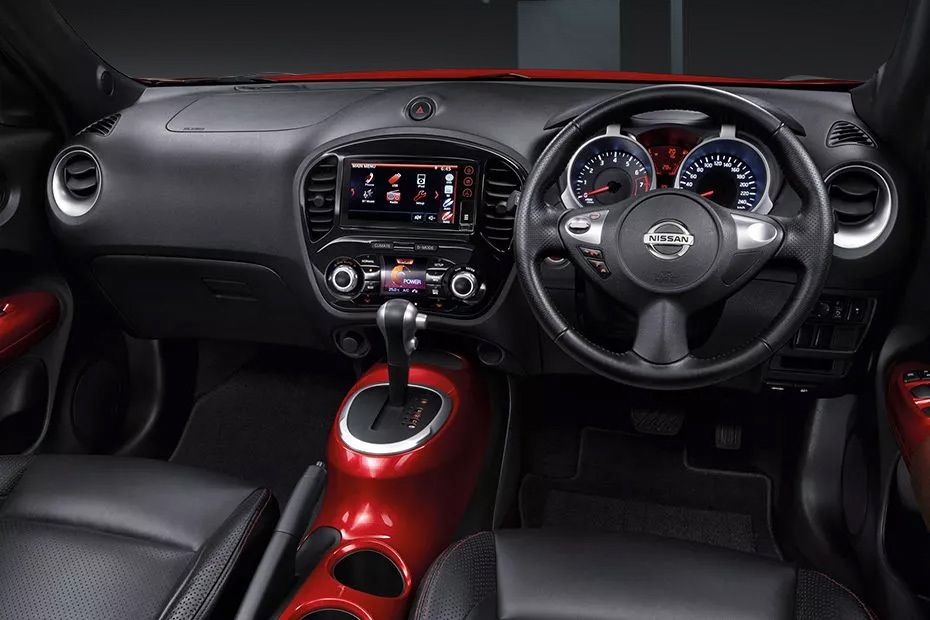 The instrumentation cluster featured a tachometer, speedometer, and a small display between them that displays real-time fuel efficiency, odometer and trip odometer. Sparing base models, Nissan’s Integrated Control System, dubbed I-CON sits in the lower dashboard, which manages both the climate control and the vehicle’s drive mode (Normal, Sport or Eco). Its display and nomenclature change according to the function selected and display data such as fuel efficiency stats, real-time G-force measurements and turbo boost pressure.

Related: The Battle of Crossover SUVs

Built on the Nissan B platform, the Juke measured 4,135mm long, 1,765mm wide and 1,570mm tall while having a 2,530mm wheelbase. It was offered with a variety of engine options with a good mix of modern technologies & drivetrain options which was one of the key reasons why the car was able to attract buyers in large numbers. 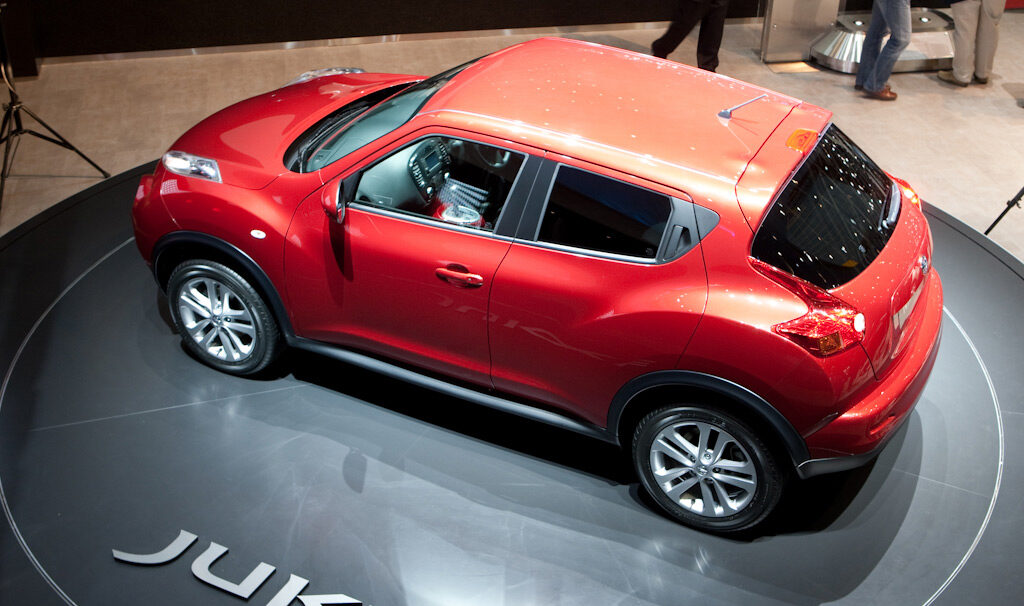 It was Nissan’s second bestselling car in Europe behind Qashqai and dominated the charts in North American markets till 2015 before the slowdown in sales occurred in presence of more rivalling crossovers. When Nissan Juke first arrived, it had virtually no competitors whatsoever. And today while the Juke boasts over 1 million unit sales, it has not less than 20 rivals in global markets.

The top variant of Nissan Juke was powered by newly developed turbocharged 1.6L gasoline engine with direct injection producing 190 hp of power and up to 240 Nm of torque. The AWD versions could power not only between the front and rear split up to a ratio of 50:50, but the first time distributed variably between the two rear wheels. This additional function for a four-wheel drive was a complete novelty in the segment of compact cars. 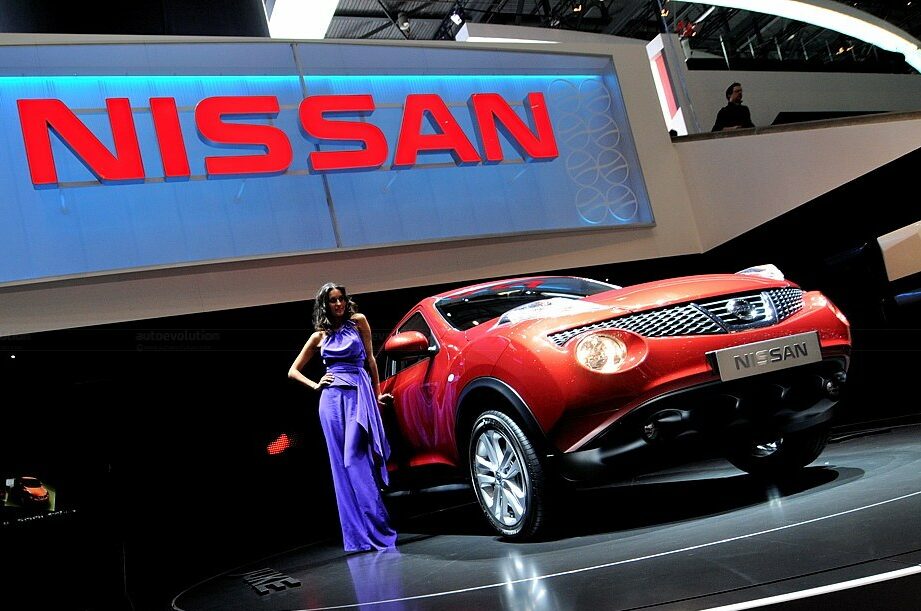 The second engine option for the Juke was a 1.6L naturally aspirated gasoline unit featuring another technology innovation – two injectors per cylinder. It provides 117 hp and 157 Nm of torque. The third option was the 1.5 dCi common-rail turbo diesel with 110 hp of power and 240 Nm of torque. 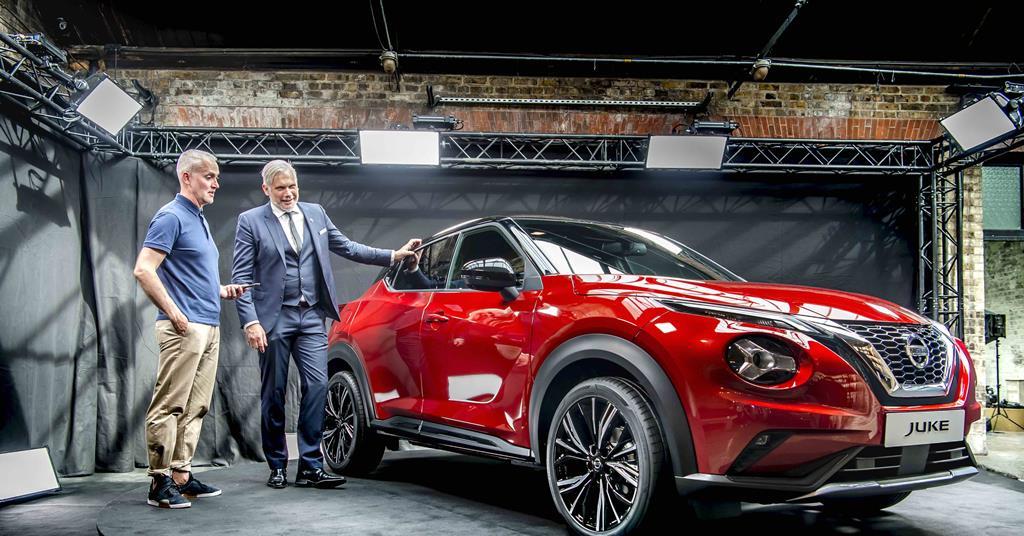 In September 2019, the second-generation Juke debuted with a more refined styling while keeping alive the tradition set by its predecessor as a compact funky crossover. According to Nissan, the 2nd gen Juke has been created for those who value design, technology and performance, in addition to practicality, in the crossover segment. Nissan says that the new Juke aims to “reinvent the segment once again” and will be as “fun to drive as ever” thanks to new levels of performance and technology. Slightly larger than the first generation model, the new Juke sits on Renault-Nissan-Mitsubishi Alliance’s CMF-B platform and measures 4,210 mm long and 1,800 mm wide, with its footprint being 85 mm longer and 170 mm wider than before, however it sits 30 mm lower and has a 105 mm longer wheelbase. 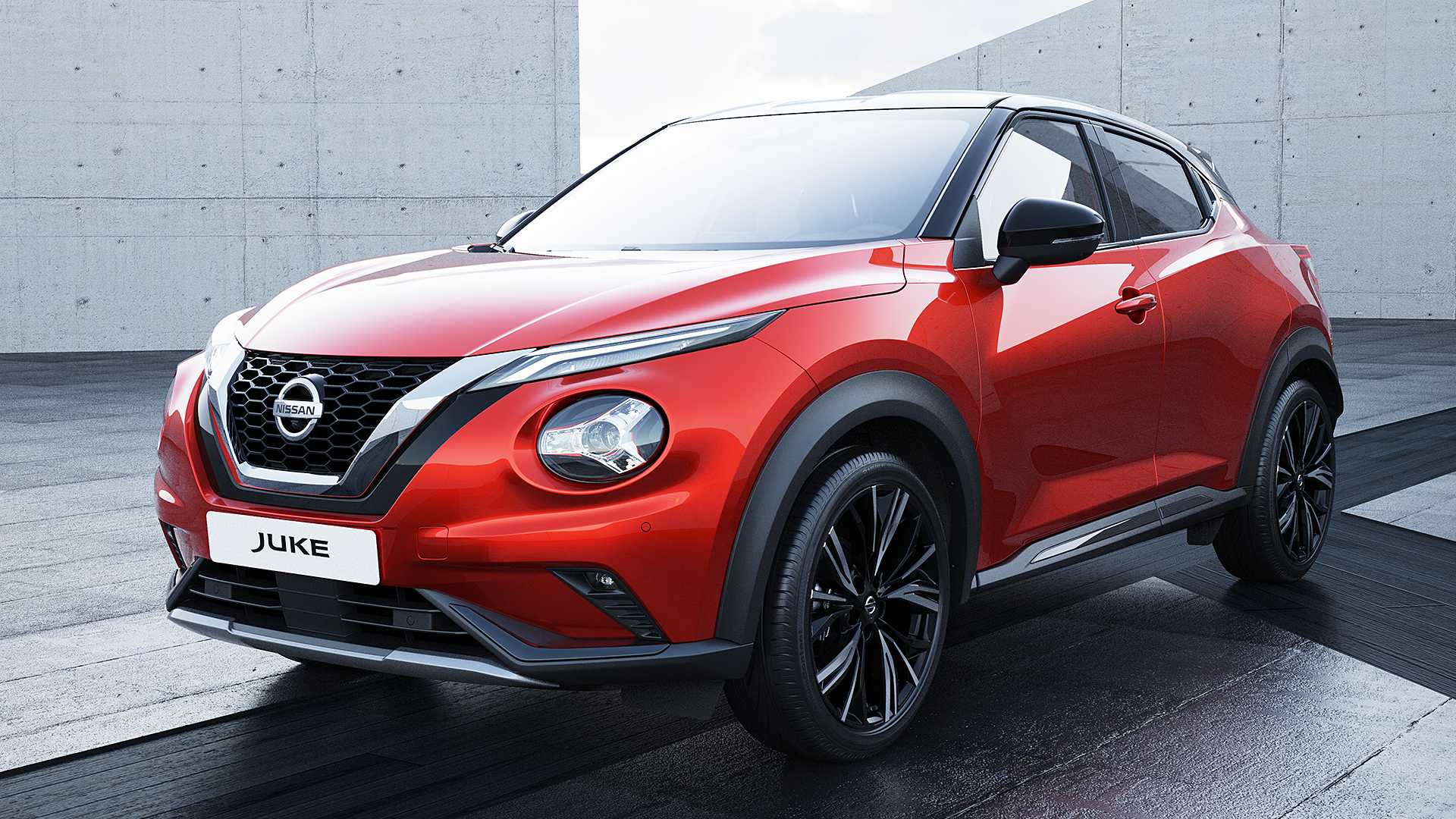 Although the new Juke gets bigger but it’s 23kg lighter than the previous one. Thanks to high strength steel and a more rigid platform that offers better stability, performance and cornering capabilities, and new levels of confidence and control, as claimed by Nissan. Under the hood, the new Juke gets a 1.0 liter 3-cylinder DIG-T turbocharged petrol engine with 116 hp, mated to either a 6-speed manual or a 7-speed dual-clutch automatic with paddle shifters. There is a drive selector with Eco, Standard and Sport modes. While Juke may have become better than before but in presence of stiff competition, it might find a hard time meeting the sort of success its predecessor enjoyed which was surely a trend-setter of its time. Although in our part of the world, many don’t envy the unusual styling characteristics of the first gen Juke which arrived here courtesy JDM imports, but it certainly worked for Nissan like no other model. The Juke blessed the world with the trend of compact crossover SUVs, which have now become a preferred choice for many over conventional compact sedans.

Given a chance to buy, will you prefer Nissan Juke over other compact crossovers? Let us know with your comments. 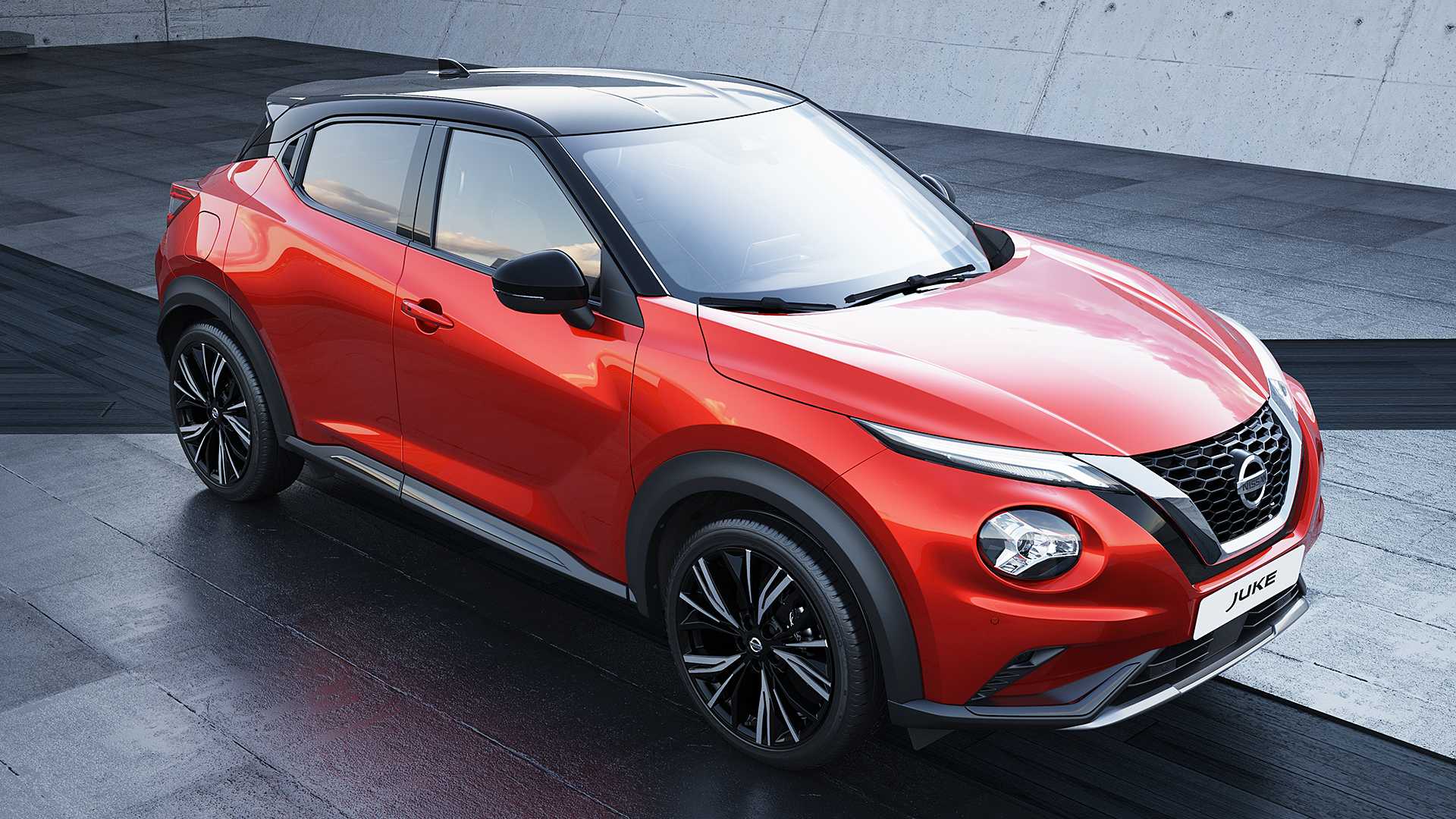