How to Prevent Cars From Overheating in Traffic Jams

Heat is an engine’s biggest enemy. The damage caused by overheating can be catastrophic and may require an expensive repair if the problem is not caught in time.

During the hot summers of today, coupled with ongoing construction going on in various areas of Karachi, traffic jam has become a normal occurrence. Massive traffic jams are observed in several areas of the city on daily basis and sight of cars stranded on the side of the road with the hood open and smoke billowing out due to engine overheat is a pretty common sight.

It’s better to know what exactly causes the engine to overheat and what can be done to prevent your engine from overheating.

An engine operates efficiently at a certain temperature. That temperature, even though it is too hot to touch by hand, is significantly cooler than it would be without a cooling system. Overheating is when the temperature of the engine climbs to a point where mechanical damage can occur. Steam coming from the engine bay, a temperature gauge reaching the red zone, and engine warning lights on your dashboard are signs that your vehicle may be overheating.

Regardless of displacement, every engine has a cooling system. Modern vehicles are equipped with a cooling system that circulates coolant throughout the engine and through a radiator to dissipate the heat.

Cooling system in a vehicle consists of many components including a water pump, a thermostat, a heater core, a radiator, coolant hoses, and the engine itself. 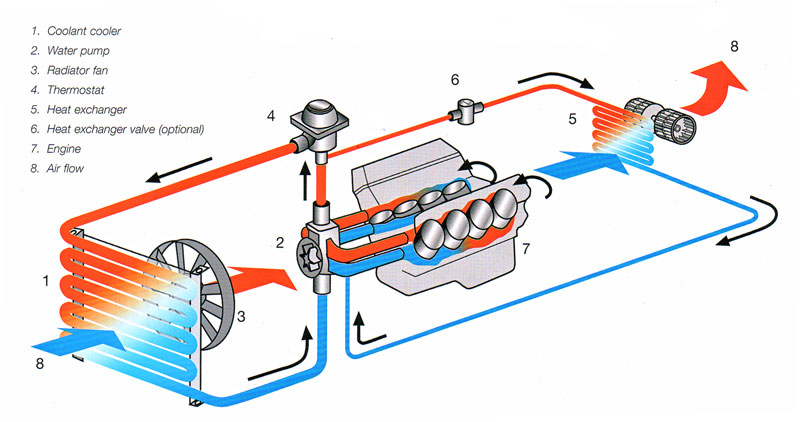 The radiator is essentially a long tube that is bent into shorter coils. The air passing by the coils disperses the heat from the coolant inside, reducing the temperature of the coolant. After passing through the radiator, a hose carries the cooled fluid back to the water pump and the cycle starts over.

Why an engine overheats?

There are several causes of overheating. Almost all of them roots from the lack of coolant circulation but can be caused in different ways.

A water pump failure is one of the more regular causes for overheating. The water pump is the most active component in the cooling system and is responsible for maintaining coolant circulation. Over time, the bearing or impeller inside the water pump can wear or break, and the impeller will no longer turn. When this occurs, it’s usually a short time until the engine overheats.

Related: Beginner’s Guide: Why Coolant Should Be Used Instead Of Plain Water

One of the important reasons is the fact that most people use plain tap water instead of coolant which is a very bad idea itself. Water boils at around 100° C (212° F) and has the tendency to evaporate at high operating temperatures, thus with no liquid left within the cooling system the engine quickly overheats. On the other hand coolant will begin to boil between 240° C and 270° C and since it doesn’t easily evaporates means it stays in the cooling system while keep doing its job.

A lesser known system that assists in cooling the engine is the engine oil itself. It plays a large part in engine cooling and also in preventing excessive temperatures from building up. The engine oil lubricates internal engine parts to prevent friction, which is the main cause of heat inside an engine. Use of substandard engine oil, old oil that has lost its viscosity, or an engine oil that is low in level can also result in engine heat up.

How to prevent engine overheating?

The best way to avoid engine and vehicle trouble due to overheating is to prevent an engine from becoming overheated in the first place. Here is what you should do:

Lastly, follow these steps if your car gets overheated.