The latest generation of Honda City that made its debut in Thailand in November last year will be joined by a hatchback version the patent drawings of which appeared on the internet earlier this year.

Courtesy Paultan, we now have the speculative renderings giving us a clear idea of how the 2020 Honda City hatchback will look like. The design in terms of frontal appearance and side profile remains pretty much same; however the changes appear from B-pillar onwards. 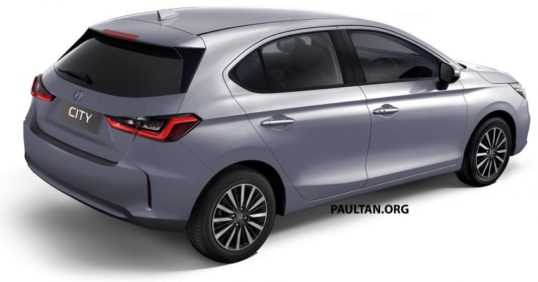 The City hatchback sees its roofline extend into a top-mounted spoiler and a rakish rear window. Like sedan, the City hatchback gets slimmer horizontally oriented tail lamps carrying similar light signature, plus there is a rear windshield wiper and off course a redesigned bumper with vertically placed reflectors. Interior is likely going to stay same as the sedan.

It is being reported that City hatchback might come as a replacement of aging 3rd gen Honda Jazz (known as Fit in Japan) in Asian & other export markets. The all new 4th gen Fit/ Jazz that debuted late last year and went on sale in its home market earlier this year has received critical response from automotive media as far as its subdued styling is concerned. So perhaps it’s going to stay in its home market and the responsibility will now come on the shoulder of City hatchback that will go against the likes of Yaris hatchback in Asian markets. 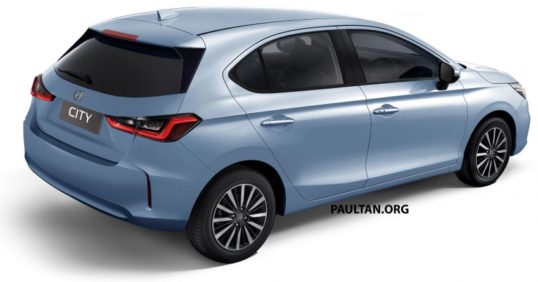 The City hatchback will likely carry the same 1.0 liter three-cylinder turbo engine that powers the City sedan in Thailand. The engine which generates 122hp and 173Nm comes paired to a 7-speed CVT gearbox. Plus as per reports the latest Jazz hybrid’s e:HEV powertrain, which consists of a 1.5 liter four-cylinder petrol engine, two electric motors and a single fixed-gear ratio could also make its way to the City hatchback.

This isn’t the first time the City will appear as a hatchback, in fact the first two generations that were produced in the 1980s were both hatchbacks before the City nameplate was discontinued in early 90. It was later resurrected as a sedan in 1996 as the City SX8 based on 4th gen Civic EF platform and since then the City has never looked back.