News regarding Sazgar, the makers of 4-stroke CNG auto rickshaws has been around for quite some time now. Earlier in January, the company secretary Arshad Mahmood, in the notification to the Pakistan Stock Exchange (PSX) said:

“Considering the potential growth and future prospects of the automobile sector in the country and in order to facilitate timely completion of the project; the board has decided to hold the expansion of auto rickshaws production facilities as communicated earlier. The project will be completed by June 30, 2019 while the plant would have a production capacity of 24,000 units per annum.”

Now on 28th March, Sazgar has officially declared that the Ministry of Industries and Production of Pakistan has awarded them the “Category A- Greenfield Investment Status”, under the Auto Policy 2016-21, to assemble and manufacture passenger & off-road vehicles in the country.

Related: Regal Intends to Launch the DFSK Glory 580 in Pakistan

Till now, the name of their Chinese partner was kept under covers, however according to their letter sent to PSX, the vehicles will be sold under the brand name “BAIC”. 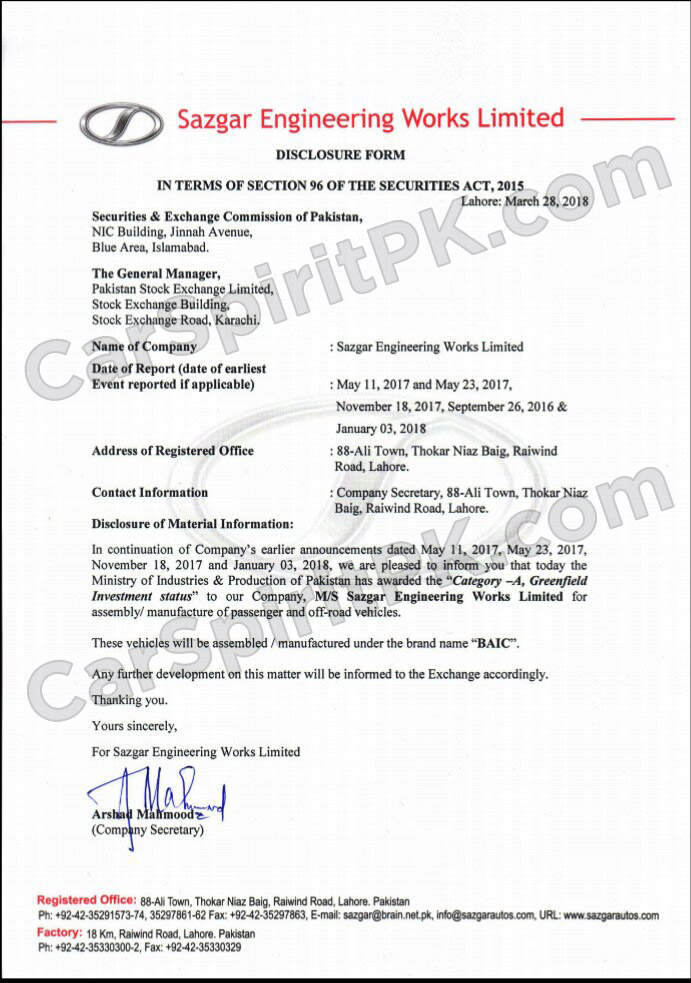 BAIC is often ranked as the fifth or fourth-largest Chinese automaker by volume and boasts several successful passenger-car joint ventures with foreign firms. However, a significant proportion of its output is agricultural, commercial, and military vehicles. It is yet to be known what vehicles the company is planning to introduce in Pakistan.

Sazgar’s main manufacturing facility is located on Raiwind Road in Lahore spread over an estate of 5 Acres. An additional 27 Acres has also been purchased by Sazgar at Raiwind Manga Road in Lahore to meet the future expansion needs.

Stay tuned to CarSpiritPK for more information on Sazgar & BAIC vehicles in Pakistan.