Things That We Miss About Old Cars

Automobile development is a constant process of evolution. Since the introduction of the automobiles, cars have changed significantly. Older features are replaced with a newer & better ones. That’s how it works. Be it fashion, technology, or just about anything, the new is created using the learning gained from the old. Below is a small list of things that used to be a part of cars, but are no longer found in the automobiles of today.

Excessive Use of Chrome

In older cars excessive use of chrome was found chiefly for style and visual expression. Cars before the 80s even came with metal bumpers. However safety regulations affected the way cars are designed and chrome bumpers ultimately faded away. Chrome was also heavily used across the body, radiator grill, bumpers, wheel caps, wiper blades, door handles and side mirrors etc.

Another lost feature of car design is the presence of long flat bonnets and the presence of a metallic hood ornament up front. Later as the time progressed, car bonnets became shorter allowing designers to generate more cabin space. Furthermore the pedestrian safety regulations forced automobile designers to leave enough space beneath the hood to keep a struck pedestrian’s head from hitting the top of the engine. Covering the engine with a plastic cover is also part of the pedestrian safety regulations.

New cars always try to reinvent the steering wheel. Some are fat, some are flat-bottomed, but most if not all, will do a lot more than just directing the front wheels. These days, a steering wheel can answer a call, it can also change the speed of your cruise control and flick through your radio settings.

Old cars kept it simple with a round and often very attractive steering wheel design. You held onto the wheel, looked out at the road ahead and worked your way through the heavy manual gearbox. Old steering also used to have horn rings which were designed so that both the hands could remain on steering wheel and just a stretch of finger or thumb could beep the sound. Later manufacturers started to offer driver side airbags, so horn activation was relocated to a button in the steering wheel spokes.

Old cars came with thin A-pillars and provided excellent visibility for the driver. Nowadays, fat A-pillars (for safety) often make driving difficult and frustrating. Sometimes they are broad enough to camouflage a whole incoming motorcyclist. However they play their part in making the cabin a safer place to be, in event of a collision.

Cars from the past used to have metal keys, nowadays they are of all shapes and sizes and usually don’t resemble a key at all. Also engine-start-stop button has replaced the traditional way of switching the ignition on. However, cars with primitive keys are still being produced in Pakistan.

Old cars used to have simple interior and easy to use straightforward controls. In a modern vehicle, as soon as you step inside there are lots and lots of controls and often look much cluttered and confusing.

One of the things that we miss about older cars is the fact that they were kept for a long period of time. With simple and robust engineering cars from the past were long lasting and literally would go several thousand kilometers without breaking up. People often were able to fix their own cars in their garage and thus used to keep them for several years.

A common thing often found in older cars were tires with white wall or white stripes on the tire sidewall. These tires were most commonly used up until the late 1970s. Gleaming whitewalls contrasted against darker surroundings were considered a stylish, yet high-maintenance feature of the older cars. Today full black tires are found in vast majority however tires with white lettering are still available in limited numbers.

Older cars used to have a decorative disk on vehicle’s wheel covering at least a central portion of the wheel, called the hub. An automobile hubcap was used to cover the wheel hub and the wheel fasteners to reduce the accumulation of dirt and moisture. Over the period of time, the hubcaps which covered just the central portion of the wheel were replaced by full wheel caps, covering the entire rim or simply the aluminum alloy rims which are lighter and more visually appealing than conventional rims.

The Whip antennas were normally designed as resonant antennas; the rod acts as a resonator for radio waves, with standing waves of voltage and current reflected back and forth from its ends. Therefore, the length of the antenna rod is determined by the wavelength of the radio waves used.

Modern cars use rubber duck or shark fin antennas instead of straight telescopic whip ones. Most radio antennae are also incorporated into the rear window along with the defroster. The shark fin on top usually houses the GPS and satellite radio receivers 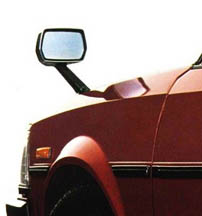 Back in the old days there used to be mirrors mounted on the fender. The key advantage with this positioning is that you don’t have to take your eyes off the road, the mirrors are in your peripheral vision and a quick glance will show a car behind or not. There is NO blind spot, unlike conditional door mirrors you still have an area that is going somewhat blind, or at least making an over the shoulder check necessary. There were other advantages, such as the fact that Fender Mirrors protrude less from the body of the car, which can really help when maneuvering in narrow roads and crowded traffic. These mirrors were preferred by taxi drivers as they felt that fender mirrors allow their customers greater privacy because drivers can use the mirrors without turning their head toward the passenger seat.

Modern vehicles are designed keeping pedestrian safety as priority, hence Fender Mirrors are no longer found in new cars. Also adjusting the mirror on doors is relatively a much easier task compared to adjust those mounted on fenders.

This was a triangular piece of glass present in the front window door. This features helped in circulating fresh air in the car without opening the entire window. By late 1970s they began to disappear as air conditioning became a standard feature.

We hope that you have enjoyed this brief review of automotive history. Stay tuned to CarSpiritPK for more interesting stuff.