Vietnam’s automaker VinFast has unveiled a pair of electric SUVs at the 2021 LA Auto Show which it plans to begin selling in the United States from next year. The D-segment VF e35 and E-segment VF e36 are expected to become available for pre-order in the first half of 2022, with deliveries to commence later that year.

Michael Lohscheller, a renowned name in automotive world who has formerly led as CFO at Mitsubishi Motors, CFO at Volkswagen Group and CEO at Opel before being hired by VinFast earlier this year for scaling up the company’s operations and presence around the globe, said:

In United States, Vinfast will only sell electric vehicles, Lohscheller said, because that’s where the company sees its largest opportunity for growth. The electric models are based on Vinfast’s own engineering, Lohscheller added. Both the VF e35 and VF e36 looks consistent with official renderings VinFast released earlier this year, featuring a styling language called “Dynamic Balance” while staying true to the brand’s design cues such as the distinct fascia and the front & rear light signatures. As other previously released VinFast vehicles, these two are also designed by Pininfarina. 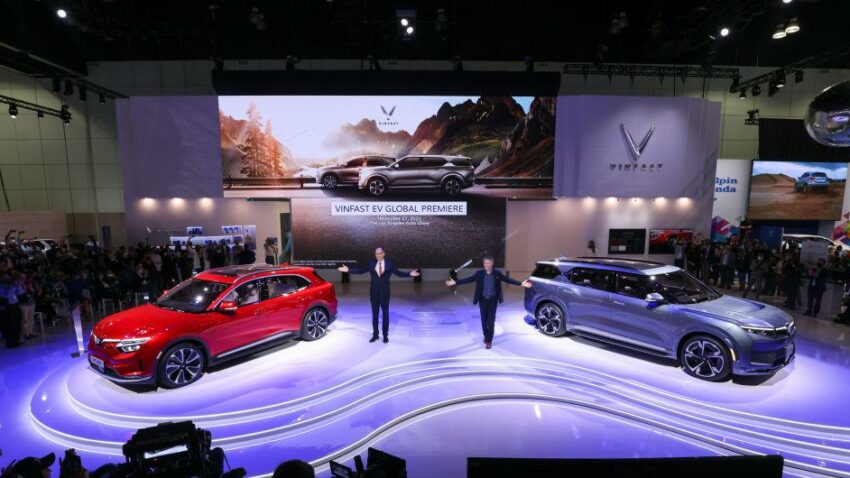 Although VinFast hasn’t given technical details of the two, however as per its website the VF e35 has a range of up to 500 km (310 miles) and VF e36  has up to 550 km (342 miles). Both EVs are said to feature 300 kW (402 hp) of maximum power and 640 Nm (472 lb-ft) of maximum torque. VinFast says the two EVs integrate Advanced Driver-Assistance Systems (ADAS) like Lane Assist, Collision Warning, Driver Monitoring, Fully Automated Parking, Summon Vehicle and more. They’re also equipped with Smart Infotainment, including in-car control features such as Voice Assistant, Virtual Assistant, and E-Commerce Services, among others. Michael Lohscheller, went on to say:

“VinFast believes that the ‘Future of Mobility’ will be one of smart electric cars that are highly personalized and integrated with technologies that benefit life and our environment. These vehicles will do so while meeting safety standards and delivering superior and comfortable driving experiences.”

In addition to the two electric SUVs, Vinfast has also recently unveiled its US headquarters in Los Angeles. For now, the company plans to build these SUVs in Vietnam but there are plans for a US factory in the second half of 2024. The company declined to mention how much the SUVs would cost, but pledged to offer “reasonable prices”. According to Lohscheller, customers will rent the battery — the most expensive single component in an electric car — and purchase the vehicle.

“You only rent the battery and then over time get the next generation [battery]. It brings the monthly cost down. We will be the first to do that.”

Furthermore, Vinfast has hired a number of executives, engineers and designers from around the world that will help them understand consumers in markets like the United States and Europe.