Airbag Theft in Honda Vehicles on the Rise in USA

New Acura and Honda models in USA have become a hot target for car thieves that steal the airbag mounts inside the steering wheel.

According to USA Today, criminals across America are stealing airbags out of relatively new Honda & Acura models for apparent resale online or to black market repair shops. It’s a trend that has caught the attention of law enforcement agencies in cities like Miami, New York City and Washington D.C. The National Insurance Crime Bureau (NICB) estimates that around 50,000 airbags are stolen each year. 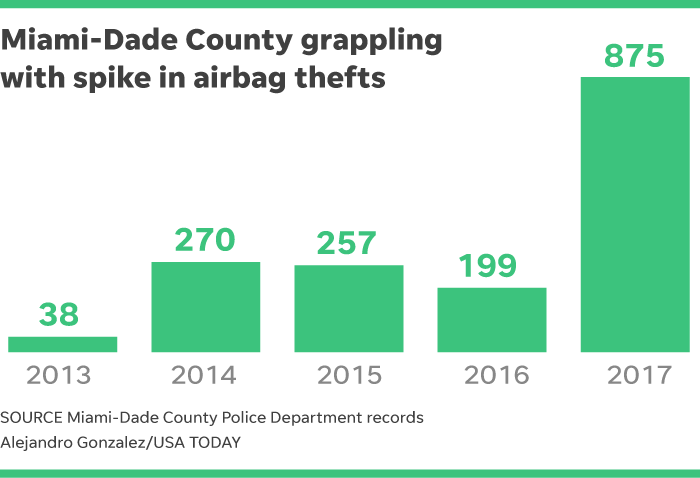 In Miami-Dade County, thieves stole 875 airbags in 2017, compared to just 13 in 2013, according to police records obtained by USA Today. In the Virginia suburbs outside Washington D.C., thieves recently smashed the windows of 10 Hondas at an apartment complex to steal the airbags. Second Lt. Jonathan Bryant told the local Fox affiliate that stolen Honda airbags often end up in chop shops and can command between $300 and $500 each. A quick search of eBay listings for Honda steering wheel airbags turns up results being sold for as high as $700, though most are listing for hundreds less than that. New replacement versions purchased from dealerships approach $1,000. Many dishonest repair shops install the stolen airbags as new and charge the owner or their insurer full price for the replacement, a version of insurance fraud.

Related: Wheels Of 48 Vehicles Stolen From Chevy Dealerships in Texas

According to Police in Coral Springs, Fla: The suspect(s) often disarm the alarm by cutting the battery, punch the driver side door lock or smash the window. It is believed these criminals take approx. 5-10 minutes to steal the airbag. 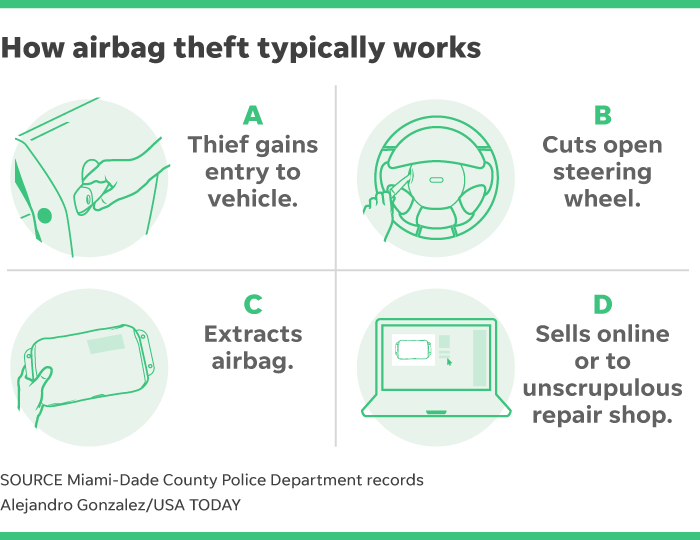 One theory for the apparent rise in airbag thefts is the wave of airbag recalls in recent years, including the ongoing recall of nearly 50 million potentially explosive Takata airbag inflators that left suppliers scrambling to make new parts, may have boosted demand for replacements.

Most of the vehicles involved are late-model Honda Civics and Accords, but it’s not clear exactly why Honda is being targeted. Honda was heavily affected by the Takata airbag scandal, with nearly 12 million Honda and Acura vehicles subject to recalls to replace the defective equipment and 20 of the 23 known deaths related to the problem occurring in Honda vehicles.

A Honda spokesman told USA Today that there should be no linkage between the Takata recall and the current wave of airbag thefts.