Range anxiety will soon become a thing of the past for doubters of electric mobility since the latest Mercedes Vision EQXX has just smashed its previous single charge record by managing 1,202 km.

The sleek-shaped EQXX impressively beat the previous single charge record by nearly 200 km. Travelling 1,202 km on a charge during its grand tour from Stuttgart in Germany to Silverstone in England, the new record trounces the previous one when it endeavored from the German town of Sindelfingen to Cassis in France which showed a total of 1,007 km on the meter.

This jaunt spanned over 2 days and took a total of 14 and a half hours of driving time in real-world conditions. This included a portion of the autobahn being closed and typical London congestion. Considering this was undertaken during peak European summer, the air-condition of the Vision EQXX was also used for over 8 hours of the journey.

Not only this, once the Mercedes Vision EQXX reached its destination at the Silverstone circuit. Formula E driver Nyck de Vries took the luxurious electrified model around the track for a total of 11 laps and achieved the top speed of 140 km/h before it eventually spluttered to a halt in the pitlane. 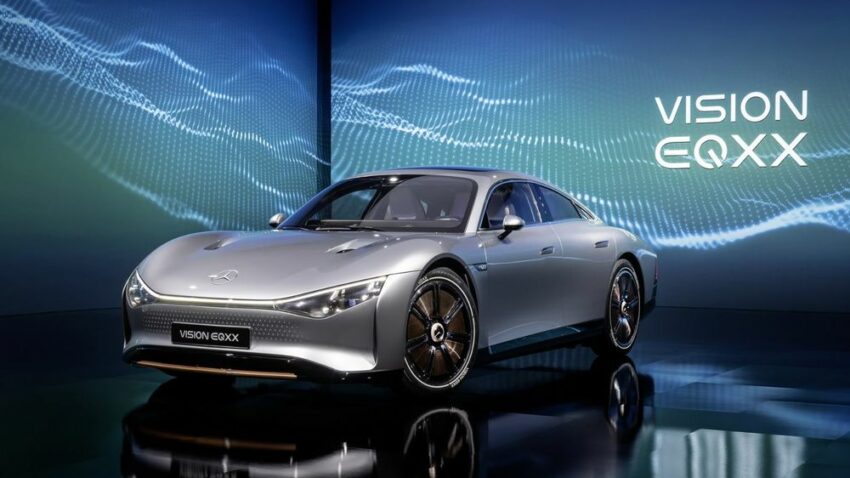 With the journey coming to an end, the EQXX managed efficiency of 8.3 kWh/100 km with an average speed of 83 km/h. Considering de Vries may have taken a fair chunk of its range out during his excursion on the circuit, it could likely even achieve a greater range than the 1,202 km it achieved this time out. The electrified model also made its way up the Goodwood hill climb over the weekend as a demonstration display.