Kia is actively working on to release the facelift of Cerato sedan which is also marketed under Forte & K3 nameplates in various markets. Images of heavily camouflaged test mules have appeared on the internet on a number of occasions concealing what’s underneath, however thanks to Kksstudio we now have the speculative renderings of the Cerato/ K3/ Forte based on the details evident in the spy images, giving us a good idea on what to expect from the refreshed model. 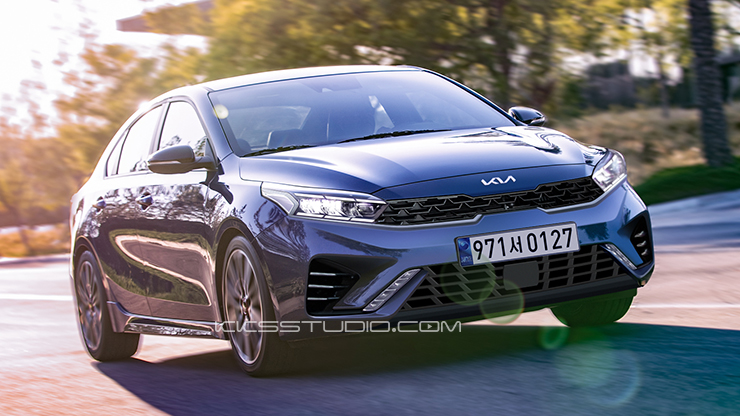 Compared to a rather friendly looking Cerato, the facelift model will get a much sharper, aggressive & bolder appearance with slim LED headlamps, a tweaked signature tiger nose grille with mesh inserts, and revised bumpers with slanted LED DRLs. Images of the rear end aren’t imagined however its likely to receive similar set of revisions with redesigned bumpers and tweaked tail lamps. However as evident from spy shots, the new Cerato facelift will be riding on new 17” alloy wheels.

Although no technical details are available at this stage but the new Cerato is likely come equipped with new set of engine options including the 1.5 T-GDi or the new CVVD 1.6 Turbo as well as possibility of a more powerful GT version is also on cards. Kia will also likely offer its innovative IMT transmission, the ‘clutch-by-wire’ intelligent manual transmission which comes in two variants– one with a clutch pedal and the other without it. The new Cerato/ Forte facelift will also receive latest safety package, as well as new infotainment system with 10.25 inch screen and a new digital gauge cluster.

The new Forte/ Cerato facelift will likely make its official appearance towards April or May 2021 and will carry KIA’s new brand logo. However as per reports, for selected markets the Forte name might be dropped in favor of K3.