Toyota and Subaru are further strengthening their long-term partnership by announcing a new capital alliance, which will see the acquisition of shares by both carmakers as well as the introduction of new products.

Toyota will raise its stake in Subaru from 16.8% to 20% in order to boost joint development of advanced technology for autonomous and electric vehicles. The increased stake will make Toyota’s 14-year-old partner into its equity-method affiliate, meaning the Japanese auto giant will see Subaru’s earnings incorporated into its consolidated financial statements.

Under a deal struck by the two automakers, Subaru also plans to acquire a less than 1% stake in Toyota worth 80 billion yen, equivalent to the largest Japanese automaker’s additional investment in the smaller partner. They will buy each other’s shares through the stock market or direct transactions between them as soon as approval is secured from competition authorities. 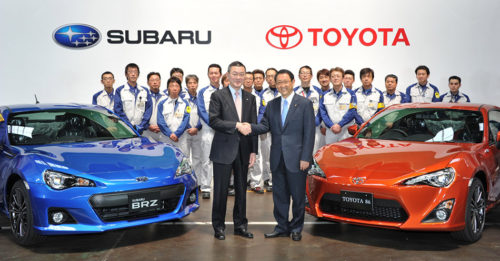 Toyota and Subaru began their partnership back in 2005, which included contract production of Toyota vehicles by Subaru and supply of vehicles to Subaru by Toyota, as well as joint development of the 86 and BRZ. Recently, both carmakers agreed to develop a platform dedicated to battery electric vehicles (BEVs), combining Subaru’s AWD and Toyota’s vehicle electrification technologies.

The deal will also see the joint development of the next-generation 86 and BRZ, as well as other areas including car connectivity, autonomous or assisted driving, new mobility or car-sharing, and electrified powertrains and components, with the expanded use of the Toyota Hybrid System in Subaru models and wider cooperation on connected vehicles and autonomous driving.

FacebookTweetPinLinkedIn
Subscribe
Login
0 Comments
Inline Feedbacks
View all comments
Tags:AlliancePartnershipSubaruToyota
previousHonda Wants You to be Ready
nextVitz Nameplate to be Discontinued in Japan for the 4th generation Yaris