Scrappage schemes offered by car manufacturers are currently heating up the UK car market. These schemes, which offer a sum off a new car in exchange for an older car, are being promoted by almost everyone – from cheaper brands like Suzuki to heavyweights like Volkswagen and Ford. The German premium big three are in it too, and BMW was the first to move in the UK.

According to BBC the scrappage deals come as car manufacturers have been under increasing political pressure to encourage consumers to buy less polluting cars, especially in Germany. It follows VW’s Dieselgate scandal, where 11 million vehicles worldwide were found to have cheated on emissions tests.

Volkswagen was one of the early movers. Its UK scheme covers all brands under the VW Group and follows a similar initiative in its home market, where discounts of up to 10,000 Euros are being offered for older diesel vehicles. In the UK, the company is offering £1,800 off a new VW Up! to £6,000 off the Sharan MPV and Passat GTE, in exchange for any diesel car below Euro 5 emissions standards, registered before 2010. 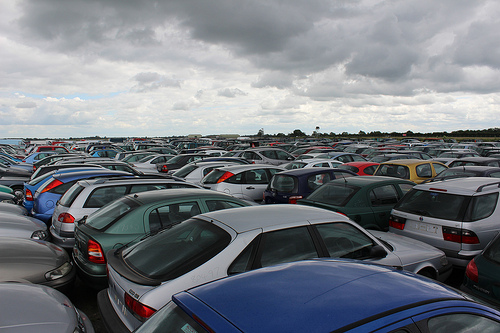 Old cars don’t fetch much on the used market, so it’s an opportunity to cash in on the clunker. And if one wants to upgrade to a hybrid or EV that comes with UK’s Office of Low Emission Vehicles (OLEV) grant, incentives can be combined. For instance, a Volkswagen e-Golf can be had for £10,000 cheaper – £5,500 scrappage + £4,500 grant.

The scrappage deals to get old cars off the road coincides with the European Union’s new and tougher emissions tests. All newly-launched cars will have to undergo robust “on-road” testing in addition to lab tests, before they go on sale. The new tests are said to be the most stringent in the world, and would better reflect modern driving styles.

Mike Hawes, CEO of The Society of Motor Manufacturers and Traders said:

“Combined, these new and demanding tests will soon give consumers emissions performance information that is far closer to what they experience behind the wheel. They will also inspire greater confidence that the new cars they buy are not only the cleanest, but the most fuel efficient ever produced.”

Related: RON 92 Petrol Approved For Use In Pakistan By ECC

While the world has already moved on to Euro VI, Pakistan has yet been able to officially adapt Euro II emission standard while only last year approved RON-92 petrol to be used in the country. In addition there is no plan to take the older vehicles off the roads or to move on to adapt newer emission levels. Government needs to do a lot to uplift the automobile manufacturing industry in Pakistan, by adapting modern emission standards, prioritize safety, and enforce vehicle crash testing as well as to implement modern traffic management system.