Authorities in Karachi have recovered a highly expensive vehicle ‘Bentley Mulsanne’ which was stolen from London, UK and then shipped to the port city of Pakistan.

The Collectorate of Customs Enforcement (CCE) Karachi, has confirmed that the UK’s intelligence agency tipped off Pakistani authorities that the stolen vehicle is parked in a house in Karachi’s DHA area. The vehicle values at around £250000. According to the CCE statement:

“A credible information was received from a national agency of a friendly country that a grey Bentley Mulsanne, V8 Automatic, VIN Number SCBBA63Y7FC001375, Engine Number CKB304693 was stolen from London and their intelligence agency indicated that the said vehicle is supposed to be parked at 15-B, South 10th Street, DHA, Karachi.”

It’s understood that those involved in the theft failed to remove or disable the tracing tracker which helped the UK authorities to find the exact location of the vehicle through the advanced tracking system. 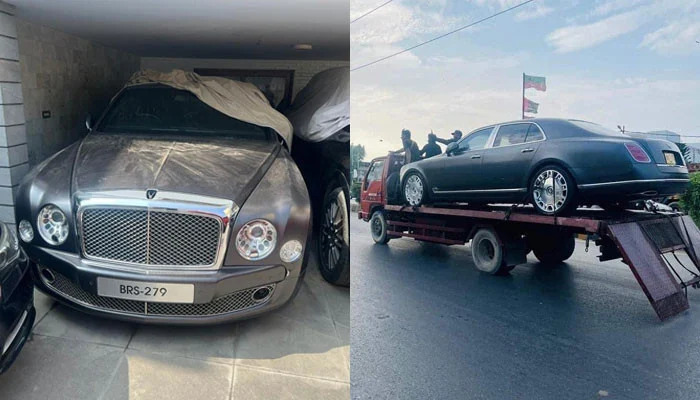 When the officials raided the house, they found that the Bentley was having Sindh registration plate# BRS-279 at the back side of the vehicle while a white colored handmade number plate bearing BRS-279 was found on the front side of the vehicle. Officials said that the chassis number of the vehicle was matched with the given details of the stolen vehicle, provided by the UK authorities.

Custom raided a house in DHA Karachi to recover Bentley which was allegedly stolen from London. pic.twitter.com/xoXvQIgiNO

During the initial investigation, the owner of the vehicle informed that the Bentley was sold to him by another person, who took all the responsibilities to clear all required documentation from the concerned authorities. The officials lifted the vehicle to its depot after failing to find its keys.

“Due to non-availability of the key of the said vehicle, arrangements were made to lift the vehicle by car carrier. The recovered vehicle was loaded on a car carrier for taking it to ASO HQ-NMB Wharf for the further completion of legal formalities.”

While it also raises questions on how the stolen vehicle was able to get shipped out of UK, the incident has also raised serious questions on the performance of the country’s different agencies. According to the sources in customs department, the registration of such an expensive vehicle required sale permission from the Ministry of Foreign Affairs, NOC from Pakistan Customs, and the receipt of the payment of duty and taxes.

Related: Retired Judge Has Over 2,200 Cars Registered In His Name

Astonishingly, the Sindh Excise and Taxation department registered this stolen vehicle without completing all legal formalities, indicating the involvement of Sindh Excise officers in these illicit activities. The case has been registered and further investigation is in progress to take the responsible persons behind the bars. 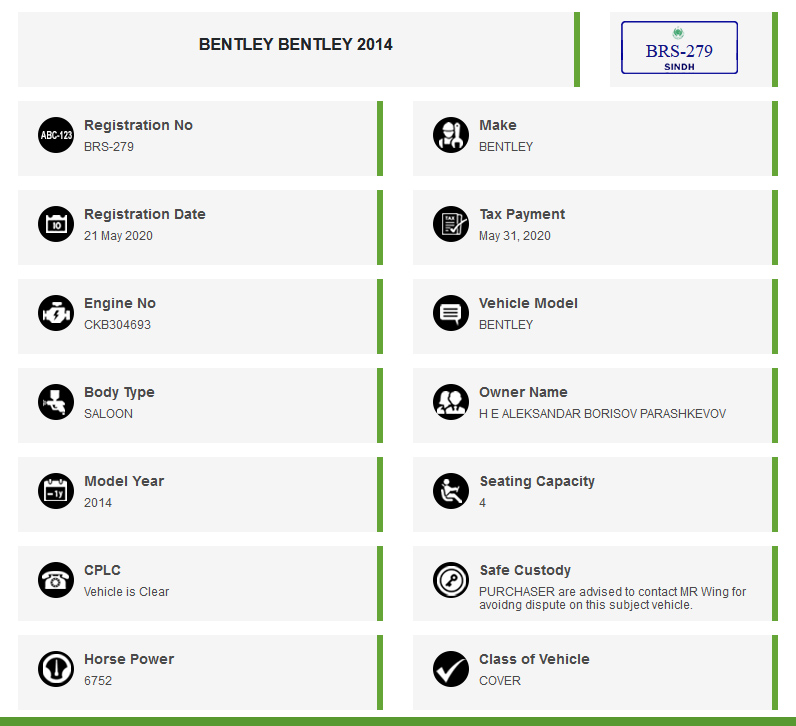 Registration details of Bentley #BRS-279. Please bear with the Sindh Excise website which shows engine displacement as horsepower and despite highlighting the issue so many times, the horrendous error persists.