On January 16th, FAW and Audi officially signed the FAW-Audi Ten-Years Business Plan in Changchun. The two sides will carry out in-depth cooperation in 21 core areas.

According to the plan, in future the two sides will continue to expand the traditional energy and new energy products line so as to cover the luxury brand’s six most important segment markets. Besides, new energy vehicles and related services will become the new focus of the cooperation in the future. 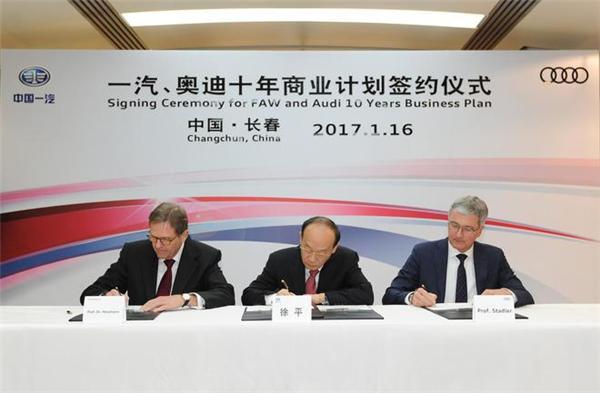 At the same time, the two sides agreed that on the basis of continuing to deepening the existing cooperation, there will be new areas of cooperation in the next ten years, including intelligent interconnection, mobile travel, joint digital projects, financial services and many other core business areas.

In addition, in order to more effectively support the development of future cooperation, the two sides agreed to continue to improve the localization ability of FAW Volkswagen, carry out specific and targeted cooperation in improving the research and development capacity for FAW Volkswagen and new energy, manufacturing capacity for mould and welding clamp equipment etc.

China and Germany has reached a high degree of consensus on the strategic development plan for FAW, Audi in the next decade. This will not only consolidate the long-term cooperative partnership between China’s FAW and Germany’s Volkswagen Audi group, but will also better grasp new opportunities in the future automobile market and deal with the increasingly severe competition and challenge.