South Korean automaker Hyundai has unveiled the first SUV under its Genesis premium brand in a move considered crucial for its expansion in overseas markets.

United States is currently biggest overseas market for Genesis where consumer preference has largely shifted towards SUVs. The company plans to launch the GV80 SUV in North America in the first quarter of 2020 and expects the model to be part of a strengthened lineup that will also lead the brand’s expansion in China and Europe where it has yet to make inroads. 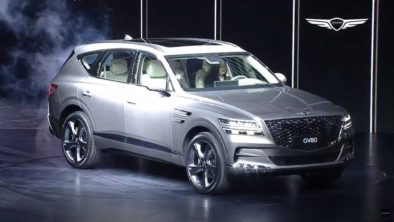 The Genesis GV80 is thoroughly digital- from its instrument cluster to the 14.5-inch infotainment screen. Driver and front-seat passenger will have an array of systems at their disposal, including an augmented reality navigation system. The Genesis Integrated Controller has a handwriting recognition system that literally lets occupants write out things such as driving destinations or phone numbers, which the tech then recognizes and implements. That’s in addition to the normal suite of apps found in modern vehicles.

The GV80 also utilizes a noise-canceling system that actively monitors road noise in real-time, and emits an opposite-wave sound to effectively block it all out. There’s an auto-purification system for the cockpit that monitors air quality and automatically activates when needed. The GV80 carries all the current driver-assist and safety systems as well, including a system that monitors driver activity and issues warnings if it thinks the driver is a bit drowsy or otherwise inattentive. For its home market in South Korea, the GV80 is equipped with 3.0-liter turbodiesel generating 278 hp of power and 588 Nm of torque. It utilizes rear-wheel-drive architecture but is certainly available with all-wheel-drive, and several driving modes for various conditions.

As of now the Genesis GV80 is available only in South Korea where sales are likely to begin towards the end of this month. For the rest of the world, the GV80 will likely offer 2.5 liter 4-cylinder turbo producing 304hp and 3.5 liter 6-cylinder naturally aspirated engine good for 380 hp. It is expected to reach global markets towards the end of this year.