Hyundai Motor Group, which includes Kia and Genesis, has reshuffled its management ranks with Chung Eui-sun, son of the current chairman, close to succeeding his father in the top job at the automaker.

With Chung Eui-sun now able to exercise more day-to-day control at the Korean automaker, he has appointed Luc Donckerwolke as the company’s chief design officer.

Donckerwolke joined the Hyundai Motor Group in 2015, initially working at Genesis, the company’s newly created luxury marque. He became the head of the Hyundai Design Center in 2016, adding the company’s namesake brand to his list of responsibilities.

In his new position, Luc Donckerwolke will oversee the design direction of all three of the group’s brands: Hyundai, Kia and Genesis.

Prior to joining Hyundai, Donckerwolke spent most of his working life at the Volkswagen Group, and played important roles in the development of the aluminium Audi A2, as well as the Lamborghini Murcielago and Gallardo, and Bentley EXP 10 Speed 6 concept car. In 2012 he was appointed head of design at Bentley. 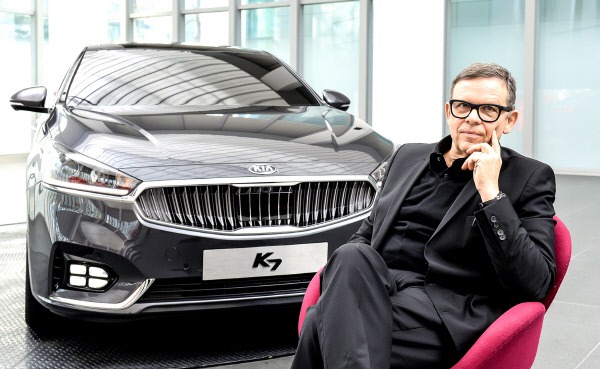 He replaces Peter Schreyer (above) in the role of the Hyundai group’s chief design officer. Schreyer is widely credited for making Kia a much more design-led brand. Appointed as the marque’s design head in 2006, Schreyer introduced the company’s signature “tiger nose” grille in 2007.

According to Reuters, Schreyer remains at the firm in his newly created role as “head of design management”.

Last month Chung Eui-sun, 47, was promoted to the role of Group Executive Vice Chairman of Hyundai. A move seen widely throughout the industry as current chairman Chung Mong-koo, 80, anointing his son to be his successor.