Malaysian Prime Minister and Proton’s founding father Dr Mahathir Mohammad took the 2019 Proton Saga facelift out for a spin around the city. The 2019 Saga facelift was launched in Malaysia on the 6th of August.

In the video, Dr Mahathir is given a walk around briefing on the car by Engineering Director of Proton Hazrin Fazail Haroon. Also present at the session were Proton Chairman Syed Faisal Albar and the deputy CEO Radzaif Mohamed.

Available in three variant forms – Standard MT, Standard AT and Premium AT, the 2019 Proton Saga facelift boast a number of exterior and interior revisions with a slashed price tag. Furthermore the CVT gearbox has been ditched in favor of 4AT sourced from Hyundai. To read more about the 2019 Saga facelift click here. 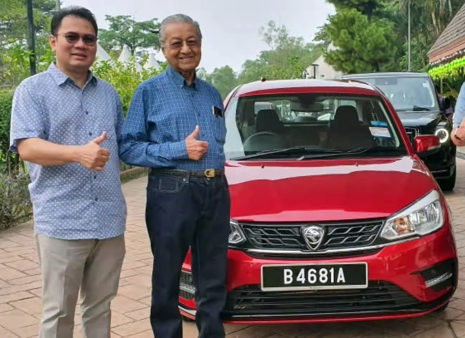 Proton, having signed an agreement with Al-Haj Automotive is in process of making an entry in Pakistan with the Saga sedan as the first offering. The ground breaking ceremony of Proton’s assembly plant in Pakistan took place on the 22nd of March 2019, while the plant is expected to commence operations by June 2020.