Maruti has launched the all new Ertiga 7-seat MPV in India with prices starting from INR 7.44 lac. The top-spec diesel version goes as high as INR 10.9 lac.

The second generation Ertiga MPV is being offered in a total of ten variants (two petrol-manuals, two petrol-automatics and one diesel-manual) for buyers to choose from. 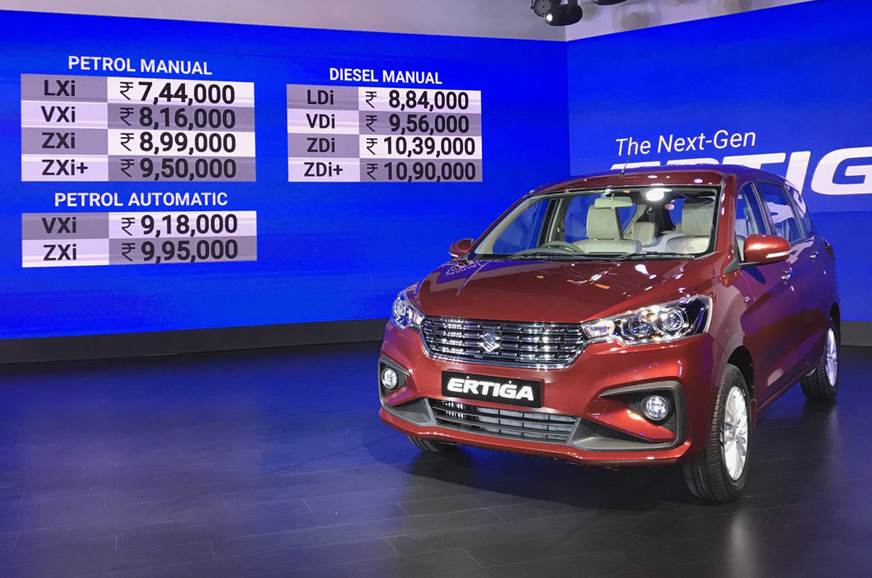 Measuring 4,395mm long, 1,735mm wide and 1,690mm high, with a wheelbase of 2,740mm, the new Ertiga is based on Suzuki’s latest & lightweight Heartect platform that also underpins a range of vehicles including the new Swift, Dzire, Ignis and Baleno.

In terms of transmissions, both engines are mated to a 5-speed manual, with a 4-speed automatic offered as an option with petrol variant only. The claimed fuel economy figures for the new Ertiga are 19.34 km/l (petrol MT), 18.69 km/l (petrol AT) and 25.47km/l (Diesel MT).

Salient features include dual front airbags, ABS with EBD, ISOFIX child seat anchors and rear parking sensors as standard. The ESP and hill hold assist, are offered with petrol automatic variants only. The new Ertiga is also equipped with a speed alert system which it alerts the driver if the speed goes over 80 km/h. From 80-120km/h it beeps twice every 60 seconds and above 120 km/h, it beeps continuously.