The Freed is a small multi-purpose vehicle (SMPV) with assembly plants in Japan and Indonesia and is available in Japan, Indonesia, Hong Kong, Singapore and Malaysia. Available as a used JDM import in Pakistan, the Freed MPV comes with several trim options with models ranging from 2012 to 2017.

We reviewed the 2012 Freed G version freshly imported last week, courtesy MovAutos, here is what we have to say about the Honda Freed G.

Unlike conventional MPVs which are inspired by Crossover SUVs, the Freed is more like a tall hatchback with regular ground clearance. For the sake of comparison it’s actually smaller (length wise) than the 5th gen Honda City we have here, have exactly the same width but significantly taller than the City, however the Freed has a longer wheelbase. With greater focus placed on passenger comfort and optimization of space, small cars are really not that small as they were before. 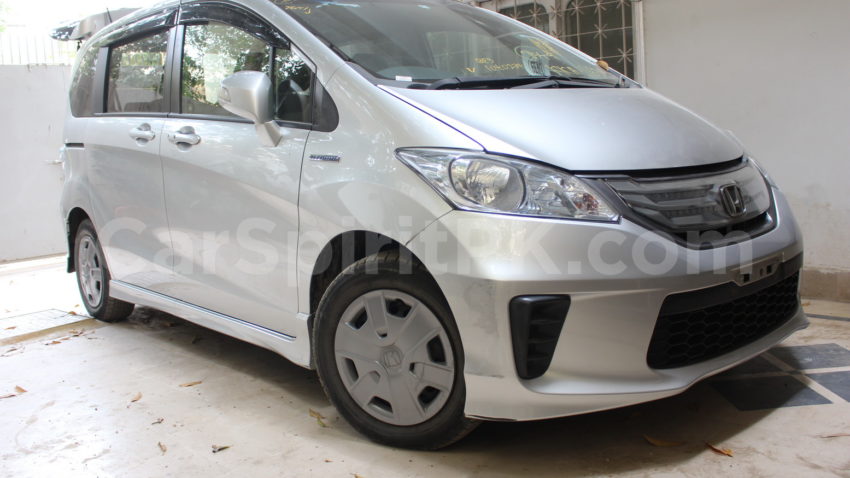 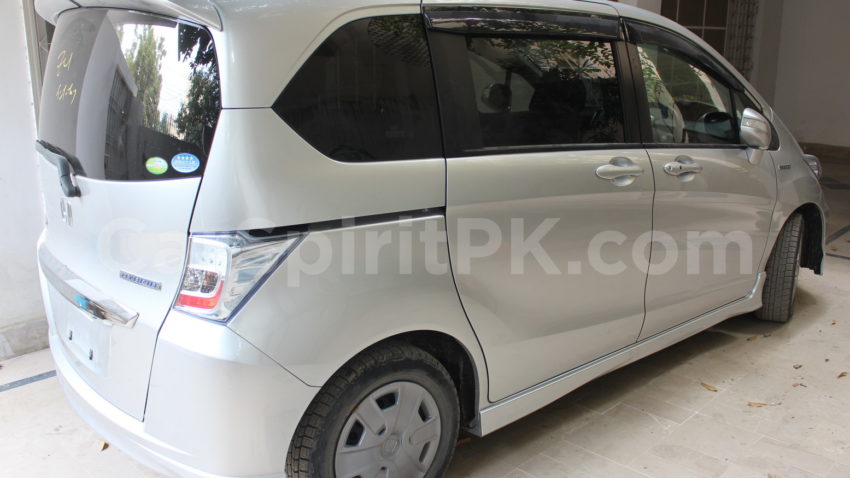 The ground clearance, like most Japanese cars look insufficient (155mm) considering the fact that the car is meant to carry 6 passengers on our local roads. However in a short ride driving the Freed around the streets (with 2 passengers onboard) it was ample enough. For the sake of comparison Toyota Corolla (11th gen) which is best known for its high ground clearance in our market stands at 175mm.

Interior wise the Freed is very comfortable, well equipped and overwhelmingly spacious car. The driving position is good and the vehicle offers exceptional visibility for the driver, due to the large amount of glass, and the clear and easy to read digital instrument cluster. The Freed also comes with smart key and smart entry system. 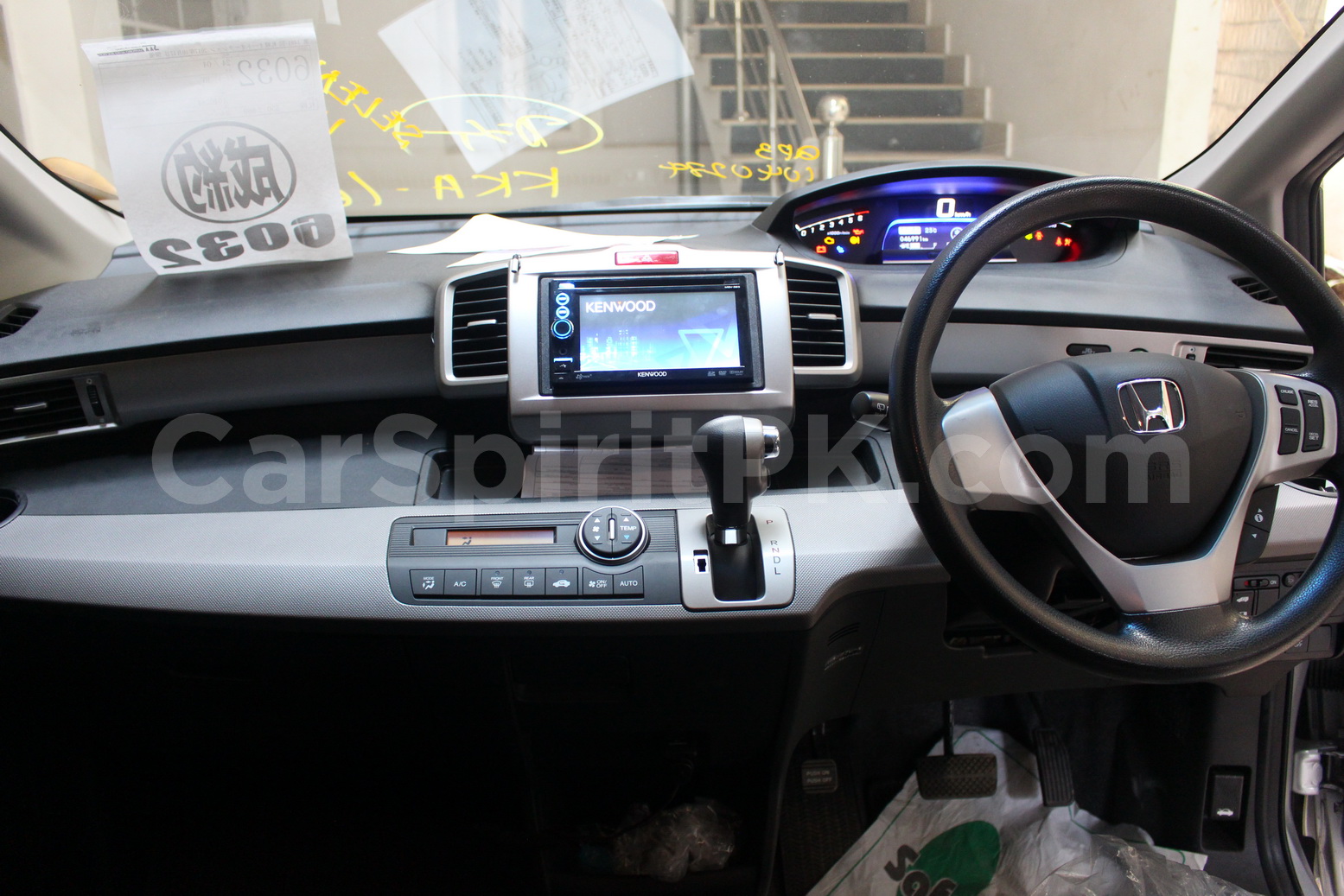 It has a two tier dashboard and a huge flat area to store and keep various things on it. The gear level is mounted on the dashboard and the parking brake (which we usually use to call hand brake) is located near to where the clutch pedal is located. Obviously being an automatic, there is no clutch pedal in a Freed. Interior styling is impressive in design and quality. The automatic climate controlled air conditioning controls lie in the same pod as the gear shift lever, with clear and easy-to-use functionality. There are a number of useful storage spaces and trays which can carry all sorts of odds and ends to bring along for the drive. There is also a multimedia navigation unit installed while the G version comes with ESC (Electronic Stability Control) which can be deactivated and activated whenever needed.

Being the G version, there is a multi-function steering wheel which allows you to operate the cruise control while the lower buttons switch through various info modes on the digital instrument cluster. The digital instrument cluster displays a number of useful information including but not limited to door-open indicators, battery info, odometer, trip meter, RPM, internal mileage calculator, outside temperature, estimated range etc. which can be switched via the buttons available at the lower right side of the steering wheel. 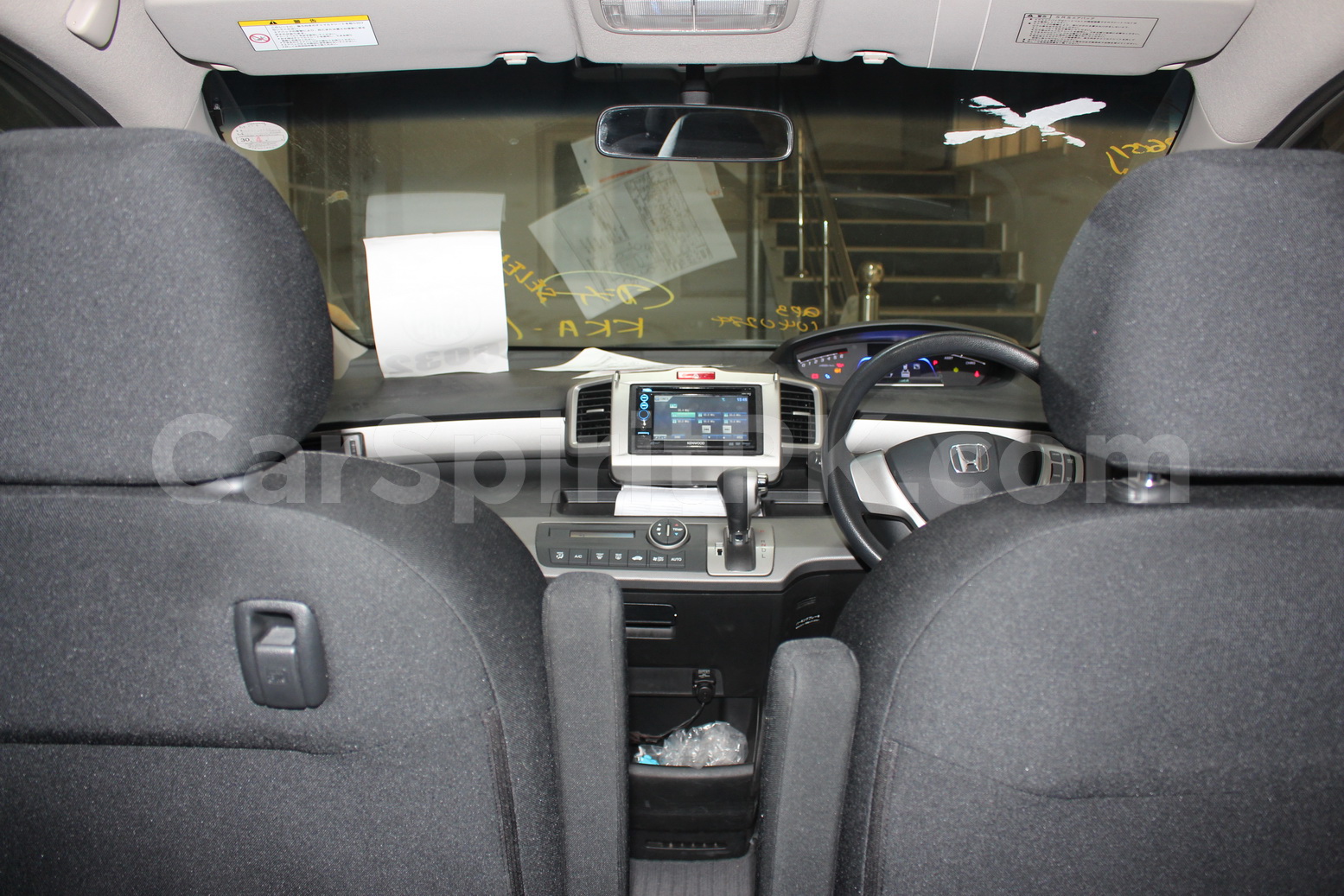 The mirrors are electronically adjustable and retractable, while you can electronically open & close the rear-left sliding door too, unfortunately the G version allows you to control only 1 rear sliding door, however up-spec versions come with both door controllers.

The Freed is a 6 seater with 2:2:2 seating configuration and like the front seats, the second and third row seats are equipped with seatbelts and dedicated foldable armrests. The rear power sliding doors makes the life of rear passengers easier to get in & out of the vehicle. Not only that the Freed offers exceptional head and leg room for 2nd and 3rd row passengers, the ingress and egress is much easier too, thanks to a relatively low floor which also makes loading of cargo a lot easier. The third row seats can also be folded intelligently to reveal an enormous cargo space. 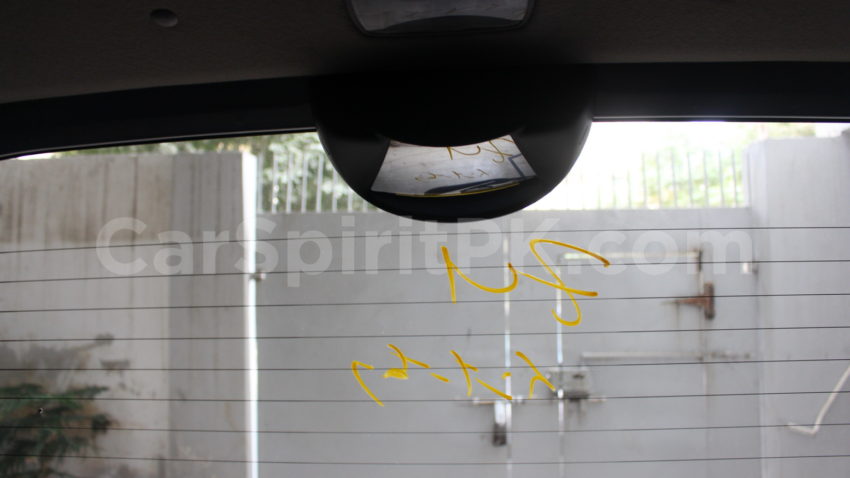 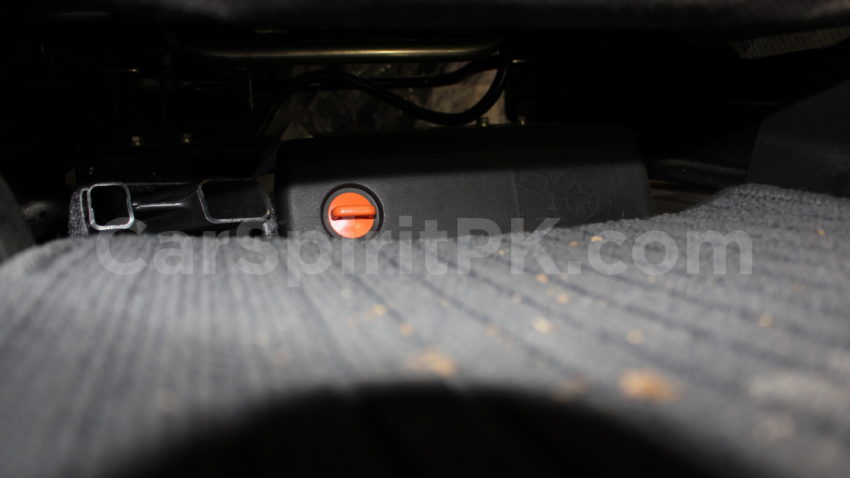 Like most modern vehicles the Freed comes without spare tire, while the tire mending kit is located underneath the driver seat. Although there is hardly anything to dislike about the Freed’s interior, the only drawback we believe was the absence of A/C vents for the rear passengers. Although the G version comes without a reversing camera, there is a useful curved mirror placed at the rear windscreen which gives you the perfect road view and aids a lot while reversing the vehicle in tight proximities. 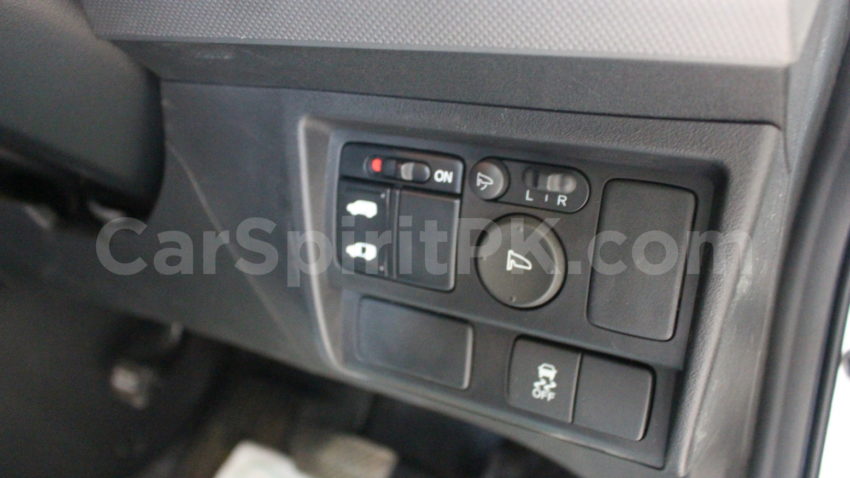 The Freed G is loaded with safety features such as Airbags, ABS, ESC, Keyless entry with Smart Key, 3 point seatbelts for all 6 seats and ISOFIX child seat anchors etc.

Although the Freed carries the same 1.5 liter engine that’s available with Honda City/ Jazz, it has been tweaked to produce slightly more pulling power aka torque which is useful since the vehicle is meant to move around carrying 6 people. The engine is assisted by Honda’s Integrated Motor Assist (IMA) hybrid system which uses an electric motor mounted between the engine and transmission to act as a starter motor, engine balancer, and assist traction motor. 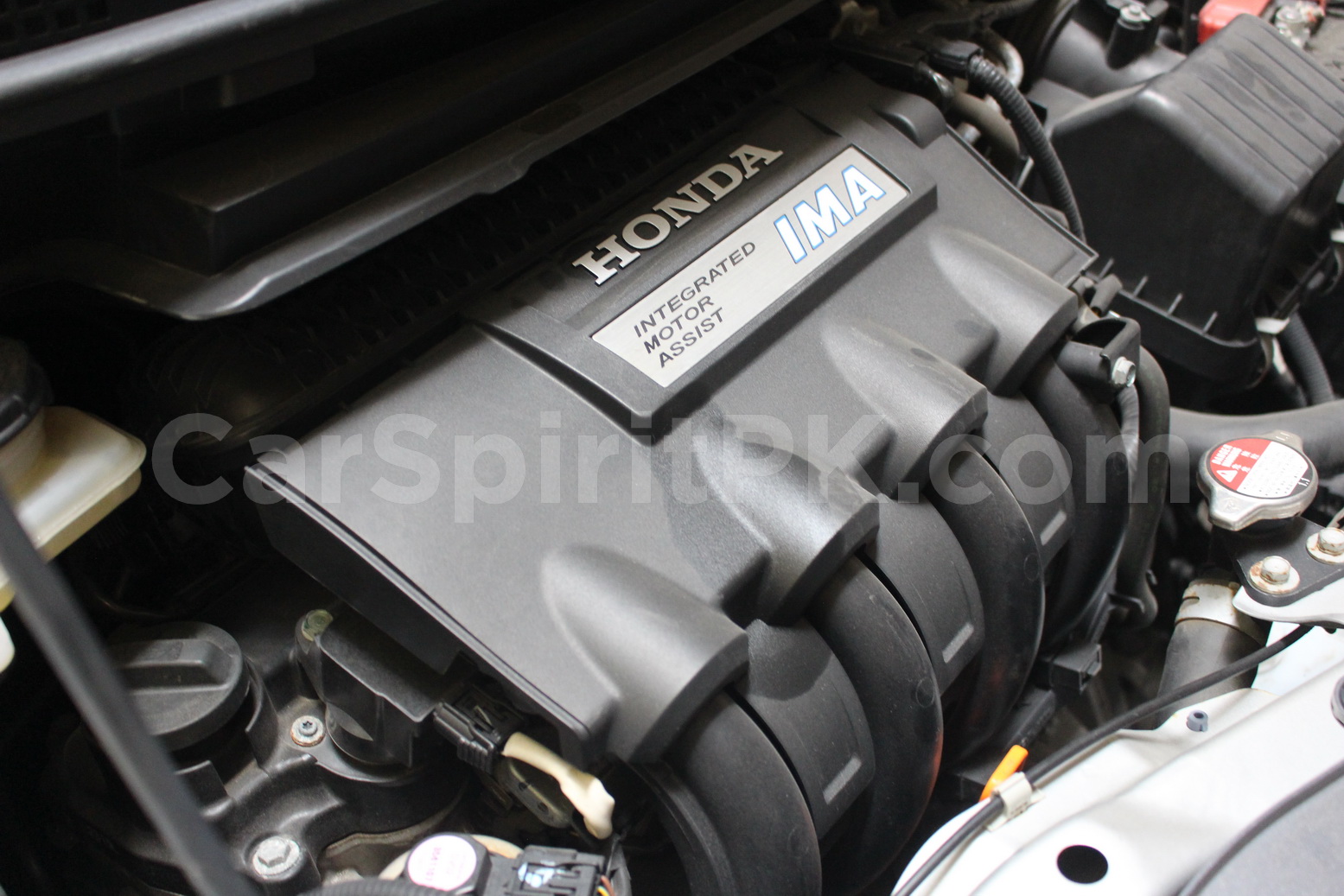 The IMA uses regenerative braking to capture some of the heat energy that would otherwise be lost during deceleration, and reuse that energy later to help accelerate the vehicle. Additionally, IMA can shut off engine when the vehicle stops and use the electric motor to rapidly spin it back up when the driver releases the brake pedal, or in the manual transmission variant, when the shifter is placed into gear from neutral.

The Freed uses Mcpherson Strut on the front wheels and torsion beam setup at the rear wheels. The engine felt powerful enough however we didn’t tested it with 6 people on board but considering the fact that the Freed’s has a tweaked version of the 1.5 liter engine, it shouldn’t be a problem. Bear in mind the Honda BR-V that’s sold by Atlas in our market is a 7-seater powered by a 1.5 liter engine too, but that’s not assisted with IMA (Integrated Motor Assist) Hybrid.

The drive is smooth & soundless and the visibility is exceptional due to large window glasses. The freed has several gizmos to assist you in driving such as the ESC & Cruise Control while the automatic transmission is a huge bonus particularly when you have to drive a car in congested traffic situations. 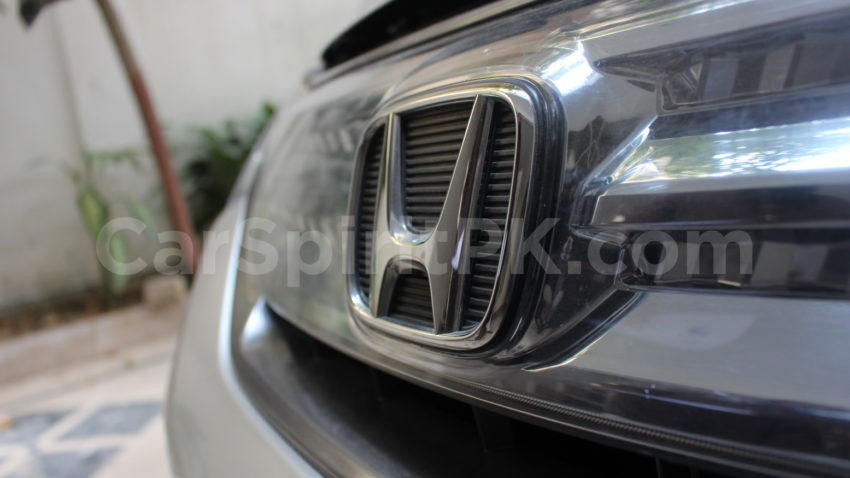 An imported car will always remind you where the world currently is, and where our local automobiles stand, Honda Freed is yet another of those examples. The Freed is a very practical vehicle loaded with safety and convenient features. It is comfortable, spacious and fuel efficient too, thanks to its hybrid system. If you have a family of 6 and want to commute in a prestigious manner, and more importantly if you can afford to buy a Japanese hybrid car (which are generally believed to be expensive in maintenance) then the Freed is the car for you. However always purchase a (used JDM) car from trusted seller with genuine auction sheet. Remember owning a good imported Japanese car is like a dream come true, but an abused JDM can become a nightmare.