Peugeot has unveiled the all-new third generation 408 which now takes shape as a fastback crossover saying goodbye to its former C-segment sedan form. According to Peugeot the all-new 408 is  “unexpected from every angle.”

The all-new Peugeot 408 sits on an updated version of the EMP2 platform that is also underpinned by the latest 308 and 508. The fastback silhouette is accompanied by a design that doesn’t skimp on sharp lines and creases, resulting in a very dynamic and aggressive shape. There is a long bonnet that is set between raised wings that are characteristic of the latest breed of Peugeot models. The prominent grille blends into the front bumper, with vertical dashed lines converging towards the lower side. A slim pair of headlamps with matrix LED technology flanked by signature fang-shaped LED daytime running lights, a trapezoidal-shaped lower intake, and the latest Peugeot logo along with the 408 script just ahead of the bonnet shut line makes up the front end of the new 408.

Just like any other crossover, there are black body claddings that wrap around the lower portion of the 408, with the sides sporting sculpted components with even bolder lines. There is a distinctive window line rising slightly above the fuel door and extending further rearwards to the base of the heavily raked C-pillar. Towards the rear, the tailgate features an embedded lip to further accentuate the fastback look. The signature three-claw LED taillights are linked by a trim piece running through the Peugeot logo whereas the stylistic rear bumper enhances the “look at me” design approach.

The new Peugeot 408 crossover measures 4,687 mm long, 1,848 mm wide and 1,478 tall while having a superior wheelbase of 2,787 mm. Compared to the outgoing sedan, the length (being a crossover) is obviously shorter, however its wider by 28mm and stands 10mm shorter to render a sporty stance. The wheelbase is also 50mm greater than its sedan predecessor. 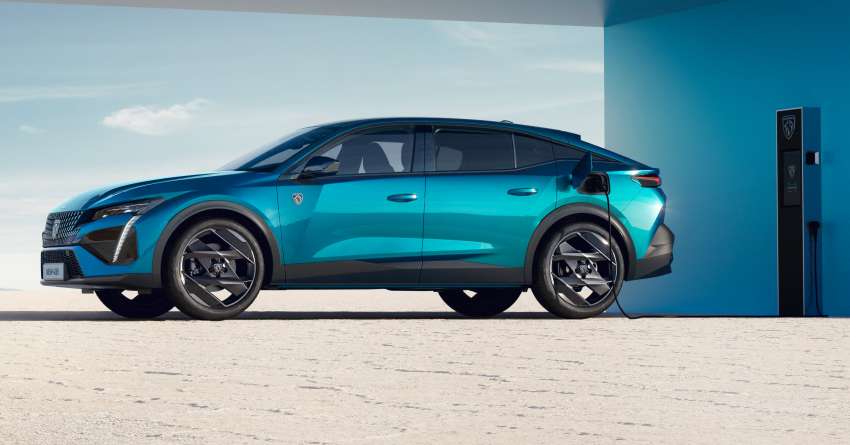 As for engines, the new Peugeot 408 will be offered with a single petrol and two plug-in hybrid options. The petrol variant gets a PureTech 1.2L turbocharged three-cylinder engine that serves up 129 hp of power and 230Nm of torque with power sent to the front wheels via an 8-speed automatic gearbox.

On the other hand, the plug-in hybrids feature a PureTech 1.6L turbocharged four-cylinder engine and an electric motor integrated with an 8-speed automatic transmission. While the e-motor is rated at 81kW (109hp) and 320 Nm, it is the output of the engine that differentiates the two options. With the power of the combustion engine and electric motor combined, the Hybrid 180 e-EAT8 PHEV delivers 180 hp (133kW) of power and 360Nm of torque. The more potent Hybrid 225 e-EAT8 variant ups the horsepower to 225hp (165kW) while retaining the same 360Nm of torque.

The all-new Peugeot 408 is scheduled to hit the market starting from Europe in early 2023 once assembly commences in France at the Mulhouse plant.