This comes on back of relaxation of various taxes and duties announced by the government in the Finance Act 2021, in order to encourage the local production of environment-friendly vehicles in Pakistan. Under the said Finance Act 2021, only 4% customs duty on the import of parts for hybrid vehicles will be applicable, while only 3% customs duty will be there on the import of parts for plug-in hybrid electric vehicles. Furthermore, sales tax on import and local supply of HEVs is 8.5% on cars up to 1,800cc and 12.75% for cars from 1,801cc to 2,500cc. 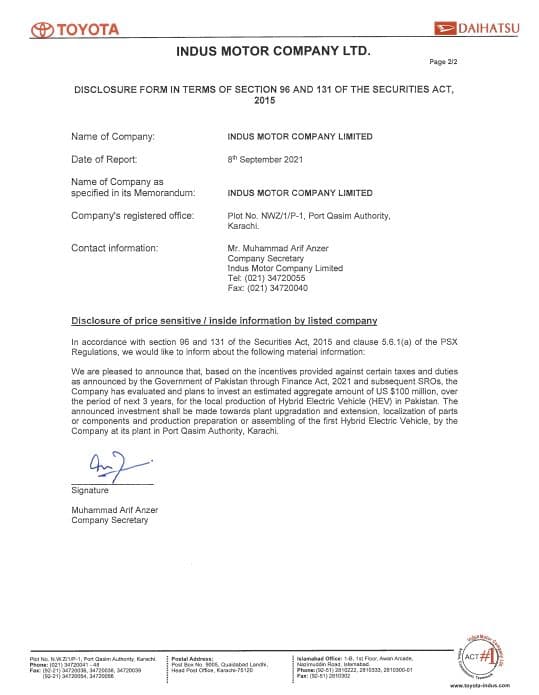 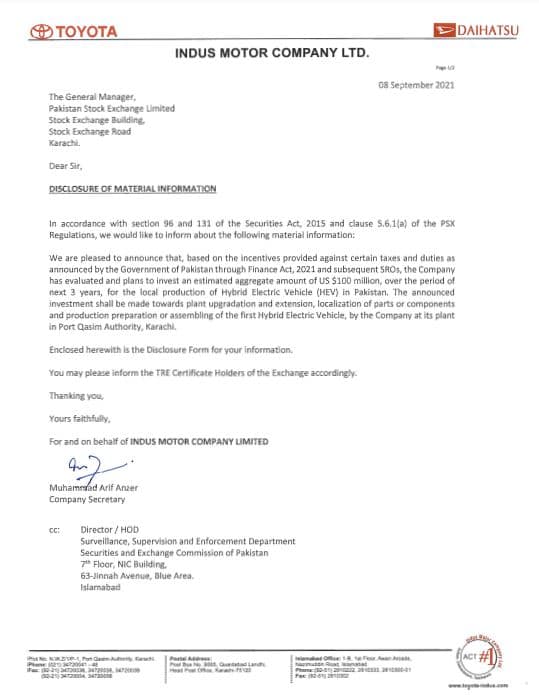 IMC’s notifications sent to the PSX

IMC currently offers Toyota Prius hybrid and Corolla Cross hybrid in its portfolio as CBUs, however the Japanese automaker Toyota, which is considered a pioneer in hybrid vehicles has an array of quality hybrids in its lineup in addition to the aforementioned two, such as the Alphard, Aqua, C-HR, new Corolla as well as new Yaris & Yaris Cross hybrid. Plus, it has a hybrid option for almost all vehicles available in its global portfolio including the Harrier, Rav4, Camry & Highlander etc.

The Japanese automakers in Pakistan have always strongly advocated in favor of hybrid electric vehicles instead of all-electric vehicles– the area where Chinese automakers excel. Now with latest tax relaxations on hybrids, the road seems open for Japanese brands to introduce their tested HEVs in Pakistan. The move, as anticipated by the government will help combat climate change effects and will help reduce country’s fuel import bill too.