Multiple Vehicles Damaged due to Landslide in Karachi

Karachi’s deplorable state of affairs in the ongoing monsoon season continues as the largest city of Pakistan which was already battling with municipal negligence & lousy power supply problems, suffers from massive water accumulation with rain water damaging residential properties by entering in the houses in median as well as posh areas.

The recent spell of rainfall caused great disturbance in normal walks of life halting all economic & business activities. Several vehicles malfunctioned while wading through the rainwater, while many parked vehicles were taken away with the overflow. 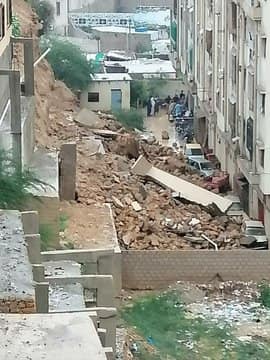 But the highlighting incident occurred today was a landslide which got triggered due to continuous rain in Gulistan-e-Johar area damaging nearly 22 vehicles including cars & motorcycles. Thankfully however, no deaths and injuries were reported. By chance, the horrific incident was also captured in a video and was shared on social media.

A couple of weeks earlier, some cars were damaged in heavy rain due to fallen bricks from an office tower on Shahra-e-Faisal Karachi, whereas in another indecent an automobile dealership was also badly damaged. The ongoing spell of rains will continue till Thursday, as per Pakistan Meteorological Department (PMD).