Another Drive Against Traffic Rules Violators

After initiating a crackdown against wrong way drivers, the Karachi Traffic Police is now going to launch another initiative asking owners of the cars and motorcycles to make their headlights and backlights functional.

The traffic police department has also set a deadline for the matter and warned of taking actions against those motorists who continue to violate the traffic rules. Karachi police’s spokesperson stated in a press release issued on Friday:

“The owners of the cars, motorcycles, buses and other vehicles are hereby requested to please make the headlights and backlights of their vehicles functional before 11th November 2018 to avoid police actions against them. Furthermore, the citizens are advised to install original registration number plates issued by the excise department, and make sure they are clean and readable.” 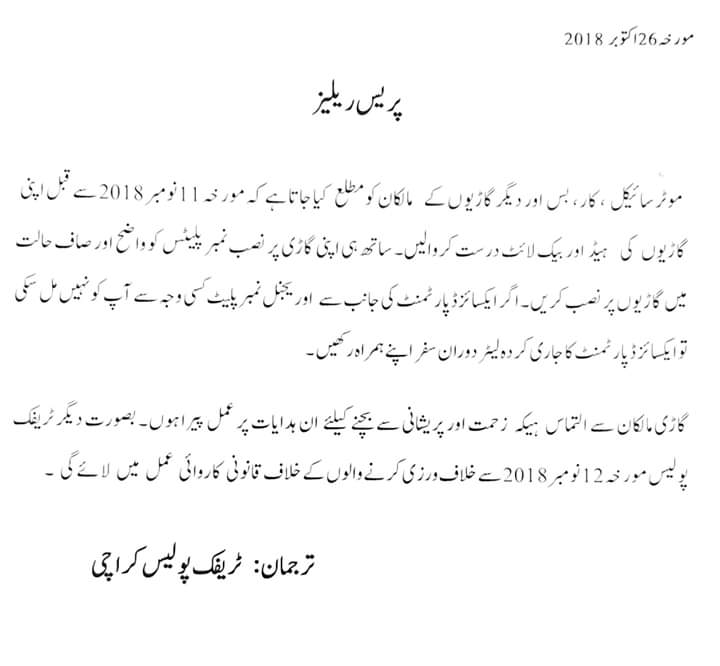 The spokesperson further said that the owners of the vehicles are advised to keep a letter issued by the excise department during the journey if anyone does not have original number plate due to any reason.

The citizens are requested to follow the instructions given by the traffic police to avoid any inconvenience, otherwise a legal action would be taken against the violators. In a recent drive against the wrong goers in Karachi that began on 9th of October, the traffic police arrested more than 1,000 drivers with 36,459 challans of over Rs 40 million.