ASEAN NCAP earlier this year, has released the videos of eight vehicles it tested, with five of them scoring five-star safety ratings.

The 10th generation Civic sedan scored 14.74 out of a maximum 16 in the Adult Occupant Protection (AOP) and 86% in the Child Occupant Protection (COP) ratings, which places it in the 4-star category (base model) however variant with ESC & SBR is rated 5-star. The 10th generation Honda Civic in ASEAN has several sources of production. Countries such as Thailand, Malaysia, Philippines and Vietnam produce this model locally, with some variants share the same specifications. 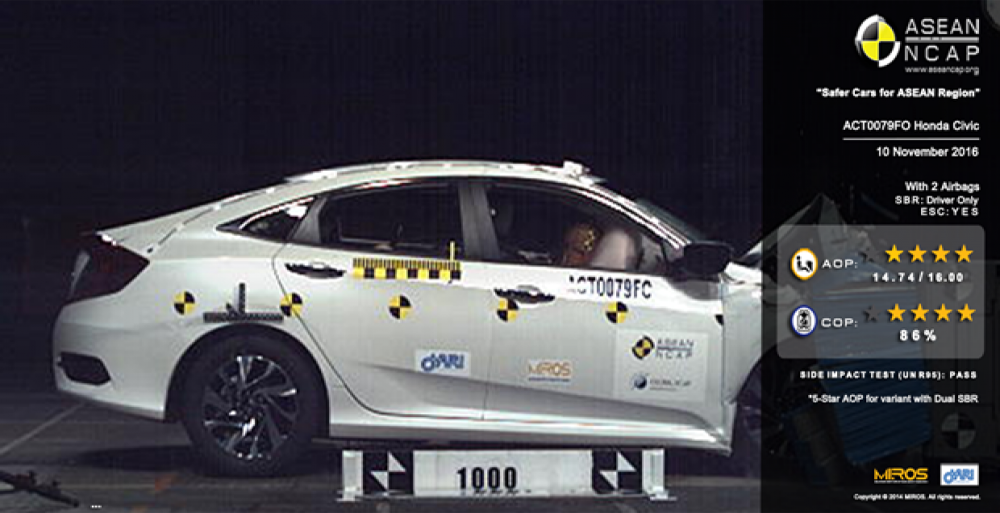 Despite having Electronic Stability Control (ESC) as standard fit in all its variants, Seatbelt Reminder System (SBR) for both frontal occupants is still absent in the base variant. Thus, variant with both ESC and frontal SBR is awarded with 5-Star rating whilst variant that is without frontal SBR is rated as 4-Star. The Civic also made a good achievement in the Child Occupant Protection (COP) category by earning 4-Star rating with 86% compliance. The sedan is equipped with double airbag, Anti-lock Braking System (ABS) and SBR for driver as standard fit. ISOFIX and top tether are also offered as standard for child restraint method.