Total new car sales rose for the first time in three years in 2021 in the ASEAN– Association of Southeast Asian Nations’ 6 major economies, thanks to a sharp increase in unit sales in Indonesia and the easing of COVID-19 movement restrictions in the second half of the year.

New car sales in Indonesia, Thailand, Malaysia, Vietnam, Philippines and Singapore totaled 2.79 million vehicles last year, up 14% from 2020, led by a 67% jump in Indonesia. However the combined total is still around 20% less than in 2019, before the pandemic took off. The rebound lacked momentum because of tighter COVID-19 restrictions in the region as a whole and production snags caused by semiconductor shortages. With omicron variant infections on the rise, auto sales are unlikely to bounce back strongly this year, according to analysts.

Related: Indonesia: Luxury Sales Tax to be Fully Eliminated on Vehicles with at least 80% Local Content

Indonesia overtook Thailand to become the biggest market for new cars of the 6 countries surveyed for the first time in two years, with sales of 887,202 vehicles, thanks to tax breaks introduced to lift demand last March. Although the tax breaks were slated to expire at the end of 2021, the Indonesian government has extended the deadline until the end of March. Before that decision, the Association of Indonesian Automotive Industries forecast new car sales in 2022 at 900,000 vehicles. Attention will now focus on whether the incentives will allow the market to bounce back to the pre-pandemic level of 1.03 million vehicles sold in 2019. 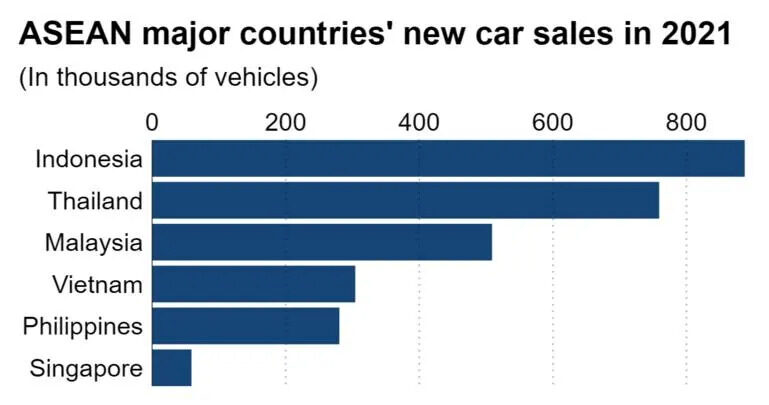 In Thailand, new car sales fell for the third consecutive year to 759,119 vehicles, down by 4%. However sales witnessed an increase compared to 2020 in the first half of last year, but lost momentum after lockdowns were imposed in Bangkok and other cities in July. The slowdown was also attributed to the shortage of chips and other auto parts, which forced many carmakers to suspend production.

Malaysia saw its car market shrink for the second straight year, as sales declined by 4% in 2021 to 508,911 vehicles. Sales activity was almost completely halted for some time after the government introduced a nationwide lockdown in June. New car sales in Malaysia in this year are forecast at 600,000 units, nearly unchanged from 2019, according to the Malaysian Automotive Association. The trade group expects sales to benefit from an economic recovery in Malaysia and its neighbors, and from the extension of tax breaks on auto sales. But Malaysian Rating, a credit-rating agency, predicted sales will fall short of the 2019 level, saying the local auto industry will continue to suffer from semiconductor shortages in 2022. 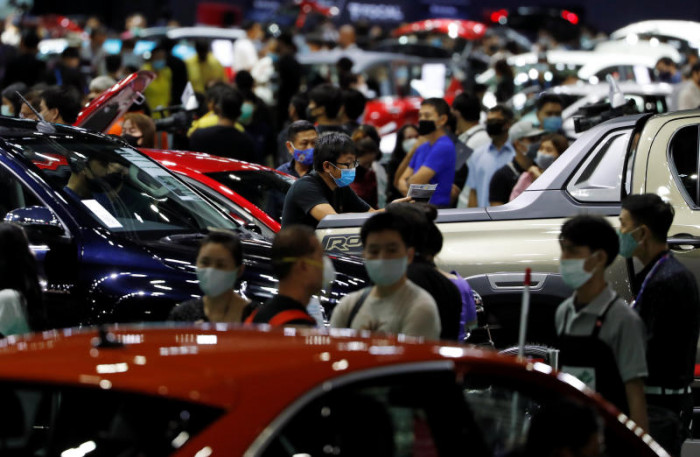 In both Vietnam and the Philippines sales climbed for the first time in two years, posting gains of 3% and 16%, respectively, to 300,000 and 280,000 vehicles. In 2020 and 2021 Vietnam was Southeast Asia’s fourth-largest new car market, a position long held by the Philippines. In December, combined new car sales in the six ASEAN countries reached 330,000 vehicles, up 6% on the year, the third consecutive gain. Month-on-month, sales jumped 15%, the fifth straight increase, highlighting the recovery in the regional auto market.