Like most markets, the Toyota Corolla remains a popular car in Pakistan too. Since the early 1970s every Corolla model in our country has enjoyed tremendous success, and after 1993 when the local production  commenced, Corolla’s popularity ballooned significantly. Pakistan currently has the highest Corolla sales in Asia Pacific region and fourth highest globally.

Since 1993, after the local production of Toyota Corolla kicked off in Pakistan, Indus Motor Company (IMC) have sold 4 different generations of Corolla and each has its own success story.

The first locally assembled Toyota Corolla was the 7th generation. In 1993 the Corolla was available in XE and GL version in 5 non metallic colors to choose from. Back then the production of Corolla in Pakistan was 20 units per day, which is now nearly 250 units per day in 2018. Throughout its 9 years of stretchy production period, the 7th generation Corolla remained a handsome seller and until 2001 its sales were more than the collective number of Honda Civic and Honda City. Considering the fact that it was up against much modern rivals including the 6th gen Civic, the Corolla was well above the sales chart. It was only when in 2001, the Honda Civic 7th generation was introduced and market got more players in the business including the Kia Spectra, the sales of the 7th gen E100 Corolla were dented.

Towards 1995, few more trims were introduced including the fuel injected 1.6 liter petrol and 2.0 liter diesel versions. Throughout its 9 years of production, IMC produced 3 iterations to keep the car going along with time. The cosmetic changes were mainly evident at the back of the vehicle with different rear garnish and combination lamps, while a slightly different grille was there at the front.

Since it was the first Corolla assembled in Pakistan by Indus Motors, people often call this generation as Indus Corolla. The 7th gen was loved for its simplicity, easy maintenance and was considered a rugged and dependable workhorse and despite all these years it still has a decent resale value.

IMC skipped the 8th generation Corolla for Pakistan and instead launched the mesmerizing 9th gen in 2002, after a stretchy 9-year production period of its predecessor. By that time the 7th gen Corolla had started to look like an outdated car while there were much modern vehicles available in the market. The arrival of 9th gen was one of the most celebrated vehicle launch in our country and turned many heads when it first appeared on our roads. The 9th gen was unique in numerous ways. It was the first local assembled car to offer a beige interior, optitron speedometer & rear LED tail lamps. Most popular trim was the 1.3 liter XLi and GLi, while a premium 1.6 liter SE Saloon was available along with three diesel trims, the 2.0D, 2.0D SE and 2.0D Saloon.

In 2005 a minor refresh was launched with slightly different grille and rear combination lamps while the 1.6 liter SE Saloon version was discontinued in favor of the 1.8 liter Altis. The 10th gen was considered a huge improvement over the 9th gen and offered better ride quality, better stability, handling and braking something that the 9th gen was often talked about.

In June 2014 IMC launched the 11th generation Corolla in Pakistan and since then it was crossed leaps and bounds in terms of success and impressive sales figures. Corolla breached the domestic sales record of selling more than 50,000 units in a fiscal year. The 11th gen comes available in three petrol engine variants, 1.3, 1.6 and 1.8. It is also considered to be the most well-equipped Corolla compared to all previous generations. It is being reported that IMC will discontinue the 1.3 liter Corolla variants somewhere during 2018 in favor of the Toyota Vios sedan. It will be interesting to see how this move will affect the sales figures of Toyota Corolla in Pakistan. 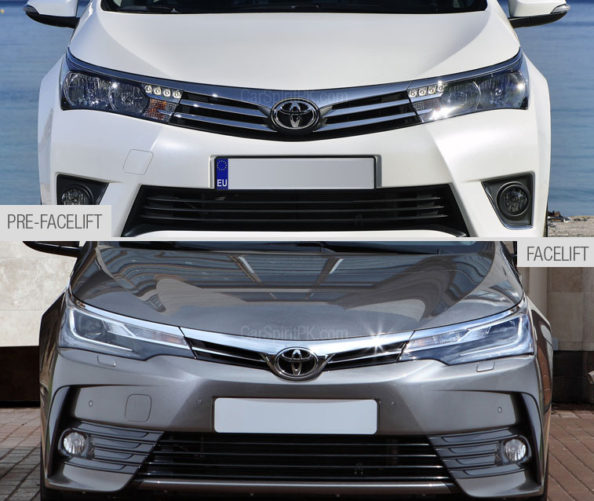 Which according to you is/was the best generation of locally assembled Corolla in Pakistan? Click to cast your vote below and let us know with the comments.