Daihatsu has previewed a near production-ready compact SUV at the ongoing 2019 Tokyo Motor Show. Although the SUV remained unnamed at the show, as per earlier reports it will be called as the Daihatsu Rocky.

The new compact SUV will be based on new modular DNGA (Daihatsu New Global Architecture) platform, and measures 3,995 mm long, 1,695 mm wide, 1,620 mm wide, while having a 2,525 mm wheelbase. The DNGA platform is characterized by its rigidity, excellent maneuverability and ride comfort while Daihatsu SUV weighs just 980 kg as per details, which will make it quite a fuel efficient vehicle. 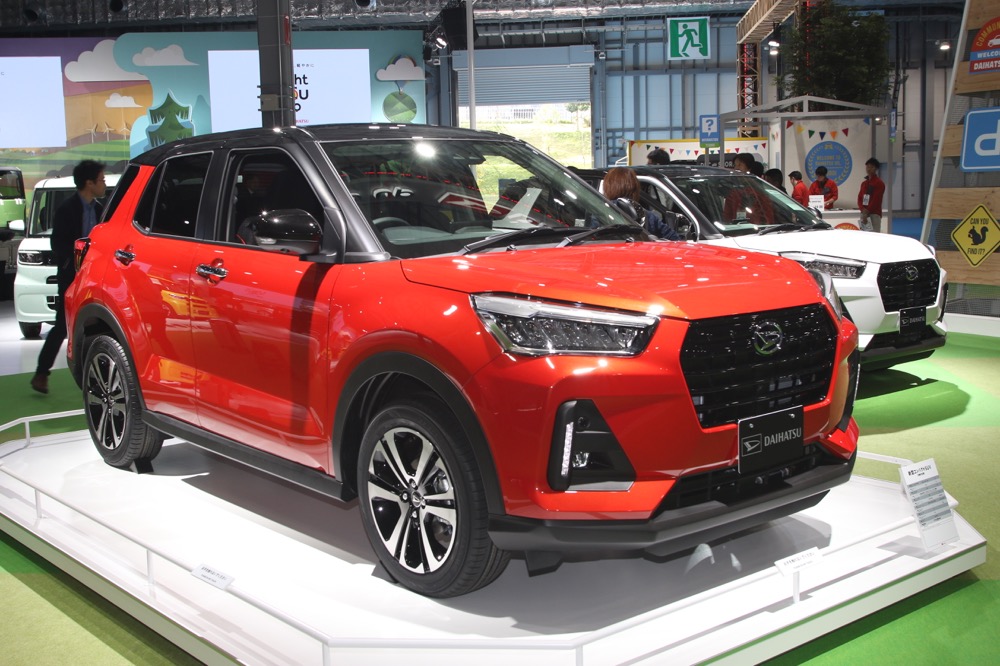 Powering the Daihatsu SUV is a 996cc turbocharged intercooled three-cylinder petrol engine, churning out 98 hp and 140 Nm of torque while paired to a CVT gearbox sending power to the front wheels. As per information, a 4WD version will also be made available having a function to improve running performance by electronically controlling the torque transmitted to the wheels, as in the Toyota C-HR.

Related: Future Toyota Vehicles to Have A Nasty Surprise for Carjackers

In terms of appearance, the Daihatsu SUV has a rather imposing look with a large, hexagonal grille that is flanked by angular headlamps with LED DRLs and triangular fog lamp enclosures. Towards the side, there are black body cladding around 17-inch wheels and a “floating roof” look that sees the C-pillars being body-colored as opposed to black as on the A- and B-pillars. There are even small window sections behind the C-pillar, which are kept separate from the rear window. 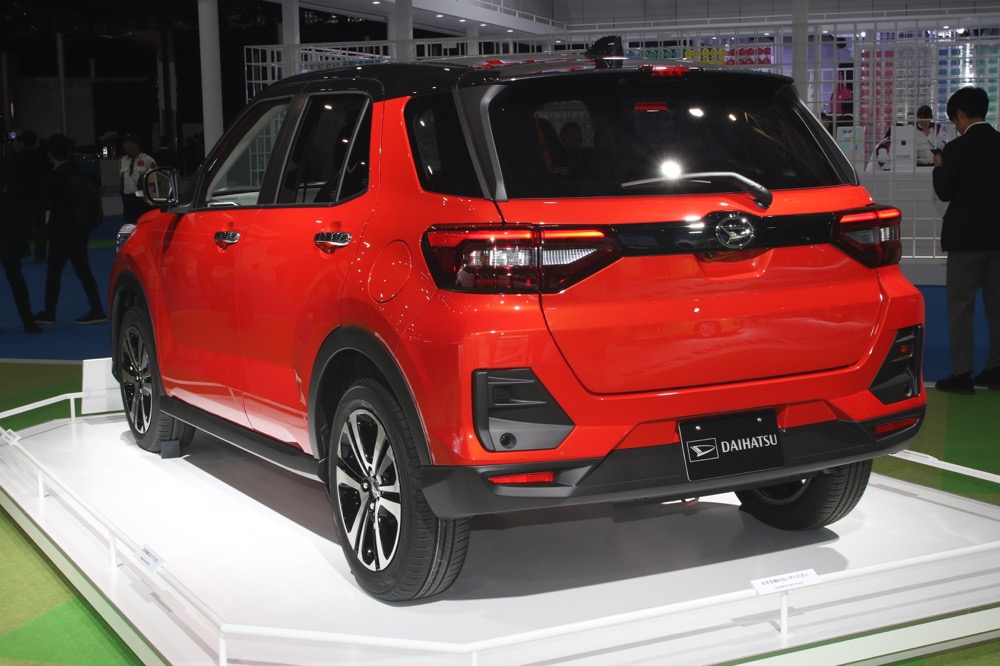 At the rear, the slim taillights are linked by a black trim piece running across the tailgate, which sports the Daihatsu badge just above the tailgate release latch. The red car at the show is the sportier trim level with red interior accents, while the white one is the standard trim.

Inside, the dashboard is dominated by a free-standing touchscreen infotainment system that sits above the center air vents, below which are the switchgear for the automatic air-conditioning system and start button, while the two-tier centre console houses the gear selector, power outlets, heated seat controls, stowage areas and the handbrake. Other cues include a multi-function steering wheel and a digital instrument cluster display. 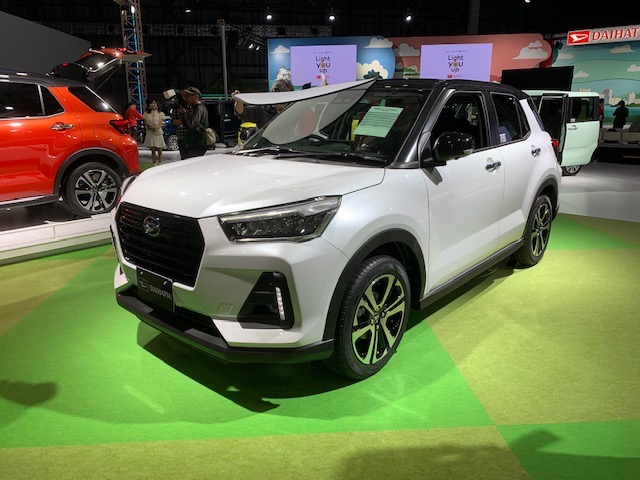 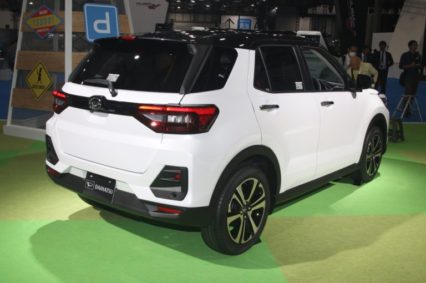 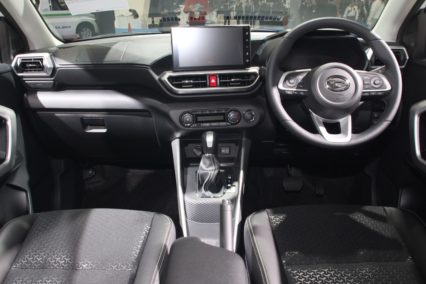 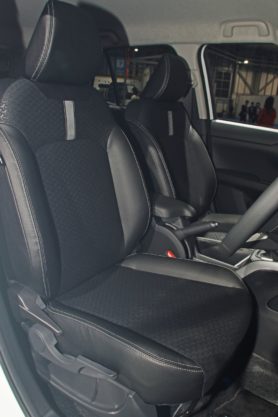 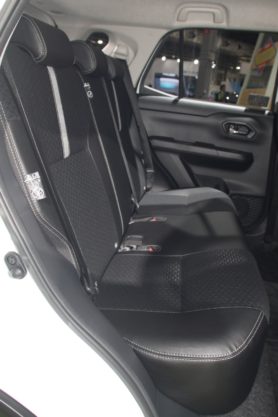 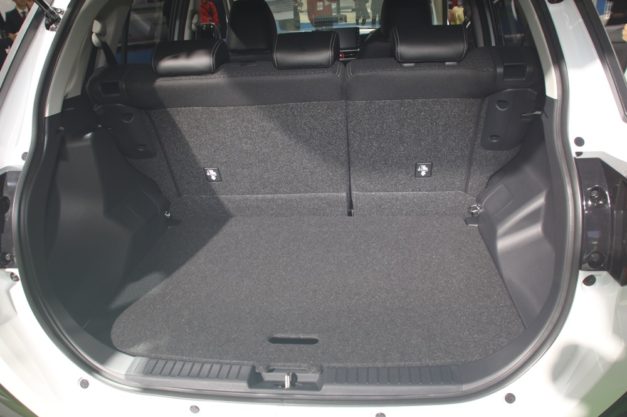 As per earlier information, the sister product of the Daihatsu Rocky will be called as Toyota Rise, which will have minor styling differences to adhere to brand’s design language, while inside and out there will be fair bit of parts commonality between the two– think Toyota Rush/ Daihatsu Terios and Toyota Avanza/ Daihatsu Xenia etc.

Related: All New Hyundai ix25 Ready for its Chinese Debut

Both Daihatsu Rocky and Toyota Rise will be targeted towards emerging markets and will take on the likes of Suzuki Jimny in Japan as well as export markets.