Proton has released the first photos of the new Persona facelift, which is set to make its debut along with the Iriz facelift, which was already revealed couple of weeks ago.

There are notable changes at the exterior, that follows a design theme shared with its hatchback and SUV siblings. Up front, the new grille garnish is styled according to the ‘ethereal bow’ that first made its debut on the X70 SUV. Similarly, Proton’s infinite weave pattern is also used on the grille, which is more pronounced than that of Iriz.

Just below the base of the ‘ethereal bow’ is a small inlet, which forms part of the new bumper for the Persona. The previous black bar in the lower apron holding the number plate is also gone, with the space now being occupied by a smaller trapezoidal-shaped intake. This is flanked by slim LED DRLs that are placed within faux intakes that carry a honeycomb mesh.

At the rear, the Persona facelift adorns Proton script on a boot lid trim piece instead of a traditional crest. The lower section of the rear bumper is also new, and features faux outlets with a honeycomb mesh to mimic the front. Other changes on the exterior include newly designed 15-inch wheels and a shark fin antenna. 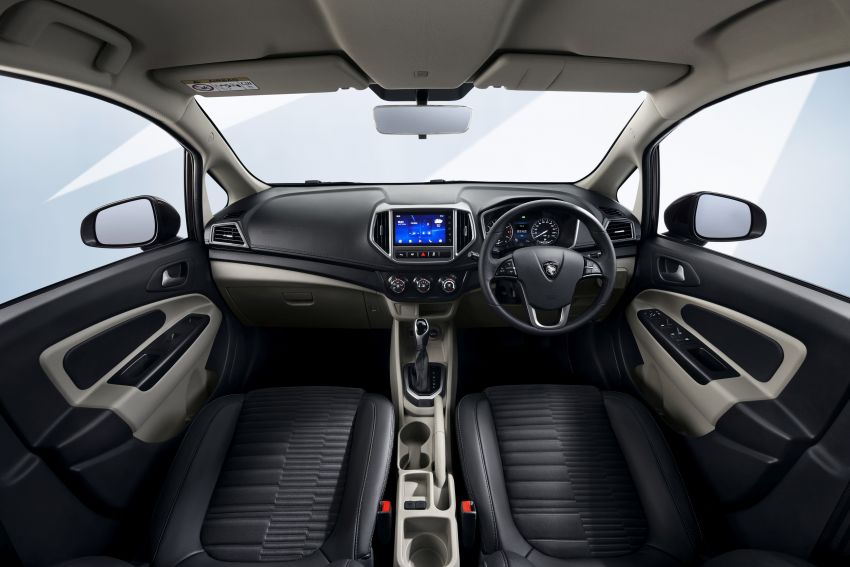 The interior mirrors the updates on the Iriz, including revamped analogue gauges and a full-color multi-info display within the instrument binnacle. There’s also a touchscreen infotainment system, developed by Proton and Chinese company eCarX – the same one that built the Geely Smart Ecosystem (GKUI) unit on the X70. The system offers a selection of connectivity options as well as voice command functions.

The Persona is powered by 1.6 liter engine that produces 107hp of power and 150Nm of peak torque. There is a 5-speed manual and CVT transmission option on offer.