With no signs of betterment in the ongoing acute petroleum shortage in the country, the government on Monday has blamed ‘mafias’ for creating another crisis and constituted a committee to probe “the element of hoarding and black marketing”.

According to Dawn, the total petrol stocks in the country had dropped below 200,000 tons that is enough for 6 days and that of diesel to about 160,000 tons enough for 4 days only. According to a senior official of Petroleum Division, the major challenge was the transportation to overcome shortage and even out supplies. A couple of oil ships would beef up supplies over the next three to four days, he added.

The authorities remained engaged on Monday with the refineries and oil marketing companies (OMCs) to address the crisis situation. The Petroleum Division notified an eight member committee to “verify the availability of stocks in the depots of the Oil Marketing Companies (OMCs) and their supply to the retail outlets”.

The committee will be led by Director General Oil Dr Shaf-ur-Rehman Afridi and has representatives of the Oil & Gas Regulatory Authority (OGRA), Pakistan State Oil (PSO), district administration, Hydrocarbon Development Institute of Pakistan (HDIP) and a member of the Federal Investigation Agency. As per the notification, the committee will make visits to retail outlets and depots of OMCs and refineries to monitor supply and availability of petroleum products.

“If any OMC is found to be hoarding petroleum products then the Committee would submit its findings to the relevant authority for appropriate action which may lead to cancellation of their marketing license.”

The committee appeared to be a futile exercise, according to one senior official, since OGRA was separately verifying stock position and was now in advance stage of show cause proceedings against at least 6 OMCs. He said that except for one or two members, the role of most of the members of the committee should in fact be examined in run up to the full blown crisis.

After a meeting with the representatives of the oil industry, Energy Minister Omar Ayub Khan blamed unknown mafias for the petroleum crisis. In his policy statement that he volunteered in the National Assembly, the minister said the government was fighting a war against mafias and shortage of petrol was also an outcome of this war. He said some people tried to create an artificial shortage as the government has reduced petrol prices. The minister added:

He appealed that consumers should avoid panic buying as stocks for 10 days were available in the country and two more ships of 65,000 tons were in the process of berthing or unloading at ports. 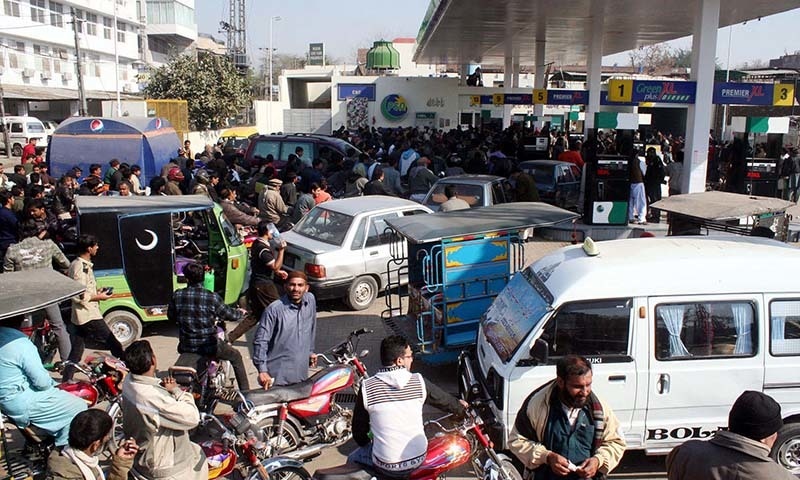 However, an official statement quoted the energy minister earlier expressing “his deep concern over the petrol shortage across the country due to artificial shortage by some OMCs and/or their dealers for profit maximization that had resulted in shortages/dry outs having an adverse impact on the lives of the general public”.

Related: Petrol Pricing in Pakistan Likely to be Deregulated