A shocking accident video from China took over the internet by storm last week. In what essentially is a rather mild accident between a bicycle and a car, things have taken a slight twist on the damage front. The Toyota Corolla’s front bumper was severely damaged by the surprisingly intact bicycle.

Many have their doubts as to whether the images shared by CGTN were true, and not some fancy computer gimmick. However local police confirmed that the accident happened in real and released a video too. According to an eye witness & the police, the collision was the cyclist’s fault who was pedaling against the oncoming traffic. 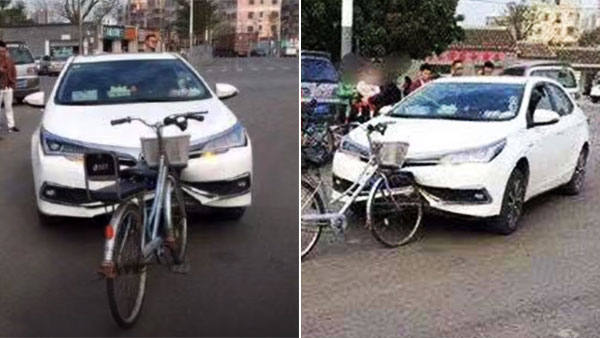 Luckily, the cyclist suffered only minor injuries after billing the car driver with a new bumper. In all probability, the owner of the Toyota Corolla would have gotten insurance coverage as well.

At least some of us might initially blame the car for its low build quality and praise the bicycle’s superior engineering. However, there is nothing abnormal in this event. Modern-car bumpers are designed to absorb a good amount of impact force, in the event of an accident. In addition to keeping the passengers safe, the flexibility of car bumpers also helps reduce pedestrian casualties.

Even though this is not the most effective safety feature, it does help curb down the outcome of a road accident. In this regard, the bumper has done its job well and has lessened the collision force of the bicycle. But needless to say, a good majority would only think otherwise.