The Indian-made Suzuki Swift which is exported to Latin American markets have scored zero stars in latest round of Latin-NCAP crash tests, despite being equipped with two airbags as standard. The Swift scored 15.53% in the Adult Occupant Protection, 0% in the Child Occupant Protection, 66.07% in Pedestrian and Vulnerable Road Users Protection and 6.98% in the Safety Assist Systems.

The disappointing result in Latin NCAP crash test is explained by the poor side impact protection and an open door during the test, low whiplash score due to the lack of UN32 prove for rear impact test, lack of standard side head protection airbags, lack of standard ESC and the decision of Suzuki of not recommending CRS for the test. This model would not pass Regulation UN95 requirements due to door opening. 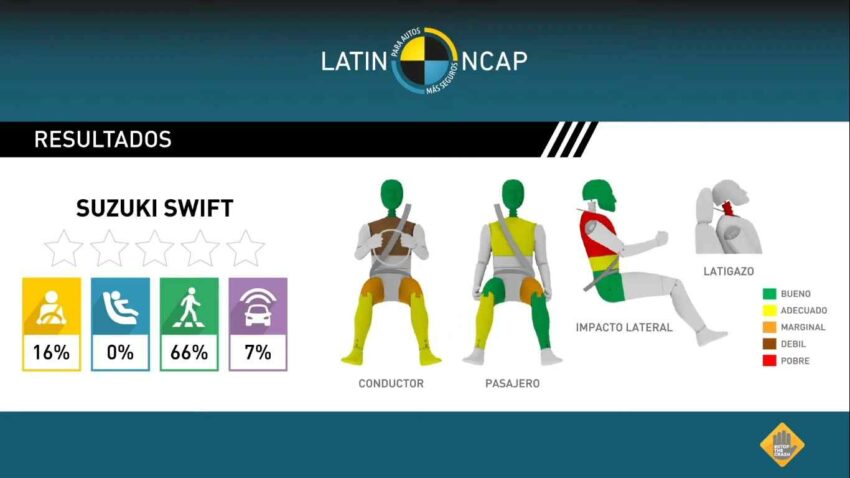 The Swift is sold in European markets with 6 airbags and Electronic Stability Control (ESC) as standard, however the one in Latin America is not offered as standard with side body & head airbags and ESC. The Latin American Swift version still offers a standard lap belt in the rear center seating position despite the well-known high injury risks of its use.

“It is disappointing and upsetting that such poor safety performances offered by Suzuki to Latin American consumers. Latin NCAP calls and encourages Suzuki to dramatically improve the model standard safety very soon. Latin American consumers are forced to pay more than the basic price to get to the same safety specs that Suzuki offers as standard in markets like Europe and in some cases, they are not even available in Latin America and the Caribbean. Basic vehicle safety, which is standard in mature economies markets, is a right that Latin American consumers should claim without having to pay extra for them. These safety features act like vaccines for one of the most severe pandemics like road traffic injuries and fatalities. Consumers have the right to receive the same vaccine supplied anywhere else without having to pay more for it.”