After a decade of absence, Kia has finally made a comeback in Pakistan. Although most people still relate the brand with the likes of Spectra & Classic NGV that were available in our market during the previous decade, sold under the Dewan umbrella. The South Korean automaker since then, has achieved leaps and bounds in automobile development and is considered among the world class automobile manufacturers of today.

This time however Kia has the strongest chance of getting into the success stream in Pakistan due to the fact that the Kia-Lucky venture is financially the strongest compared to their other two ventures from the past. Secondly the global acceptability of South Korean manufacturer has increased significantly and their product portfolio is better than ever, compared to the likes that were introduced here in previous times.

Kia- Better than ever!

Kia is listed among the Top 10 global auto manufacturers, with some impressive vehicles in its portfolio. It is one of the fastest growing automobile brand in the world which has jumped from 13th position to 8th in just under 5 years. Today Kia is largely acknowledged for its quality, reliability and above all some striking designs which has helped the company win a number of international awards.

Kia has already won more than 16 international awards in 2018 including, Kia Picanto and Stonic winning 2018 Red Dot Awards in Car Design, and Kia Stinger winning Red Dot 2018 Best of the Best Car Design Award, as well as 2018 UK Car of the Year award. 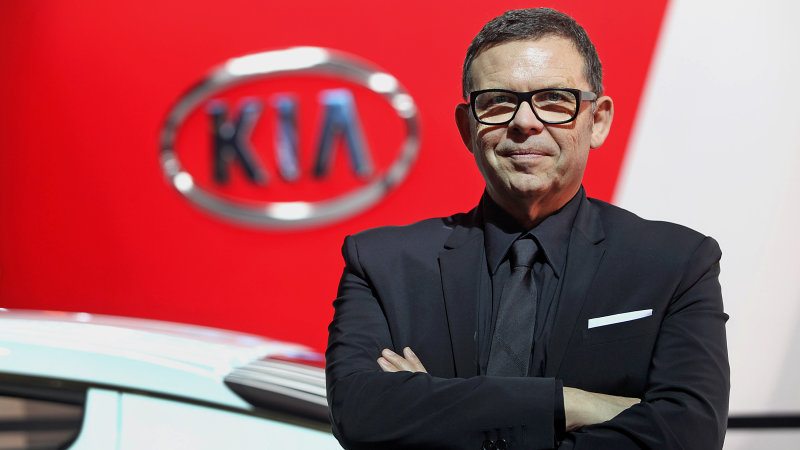 Kia is ranked #69 on Interbrand’s 2017 list of 100 Best Global Brands, for six straight year in the row. Not only this, Kia is now the 11th most valuable automotive brand, which not only ranks ahead of numerous premium and luxury car manufacturers, but also dozens of consumer brands with household names.

The South Korean automaker has teamed up with Yunus Brothers Group, which is one of Pakistan’s largest conglomerates. The company has invested $150 million for setting up an automobile assembly plant in Pakistan that will produce a wide range of commercial and passenger vehicles.

Various Kia vehicles have been spotted testing on numerous occasions already including the Picanto, Rio, Sportage and off course the Grand Carnival.

Kia Lucky Motors has launched their much awaited Grand Carnival luxury MPV. Staying true to Kia’s recent campaign, WELCOME TO MORE, the Grand Carnival is MORE than just a car offering unmatched utility and a unique driving experience! The Grand Carnival offers a great value for money with an amazing price starting from PKR 39.99 lac for the standard version and PKR 47.99 lac for the fully loaded version.

Kia Lucky Motors is offering a 4 years/100,000 km warranty on the Grand Carnival, with first two free services to its customers. Kia have already started their first dealership at Shahrah-e-Faisal Karachi and will soon be opening in Lahore and Faisalabad. 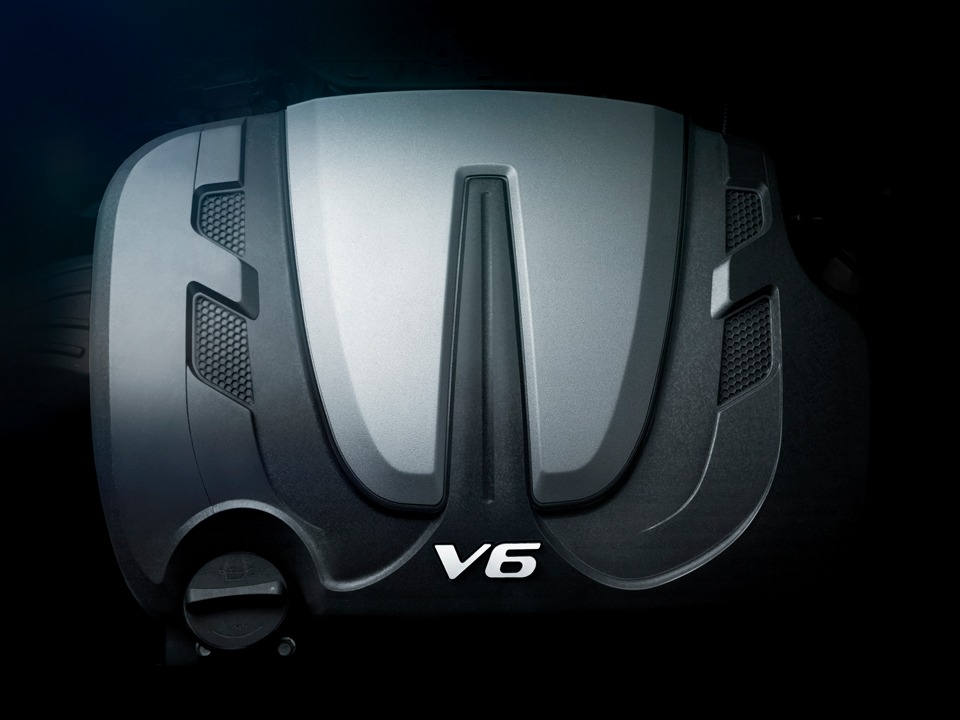 The Kia Grand Carnival comes with a 3.3 liter Lambda II GDi V6 engine mated to a six-speed automatic transmission. The fuel consumption is rated at 7.7 liters per 100km which simply converts into approx 13.5 km in a liter.

One of the interesting features is the power sliding rear door, which gives access to rear seat passengers. The system is so intelligent that if the windows are pulled down, the sliding door won’t fully open all the way (while still giving decent access to get in & out) in order to avoid any injury to the passengers. However it operates normal if the rear windows are fully closed. 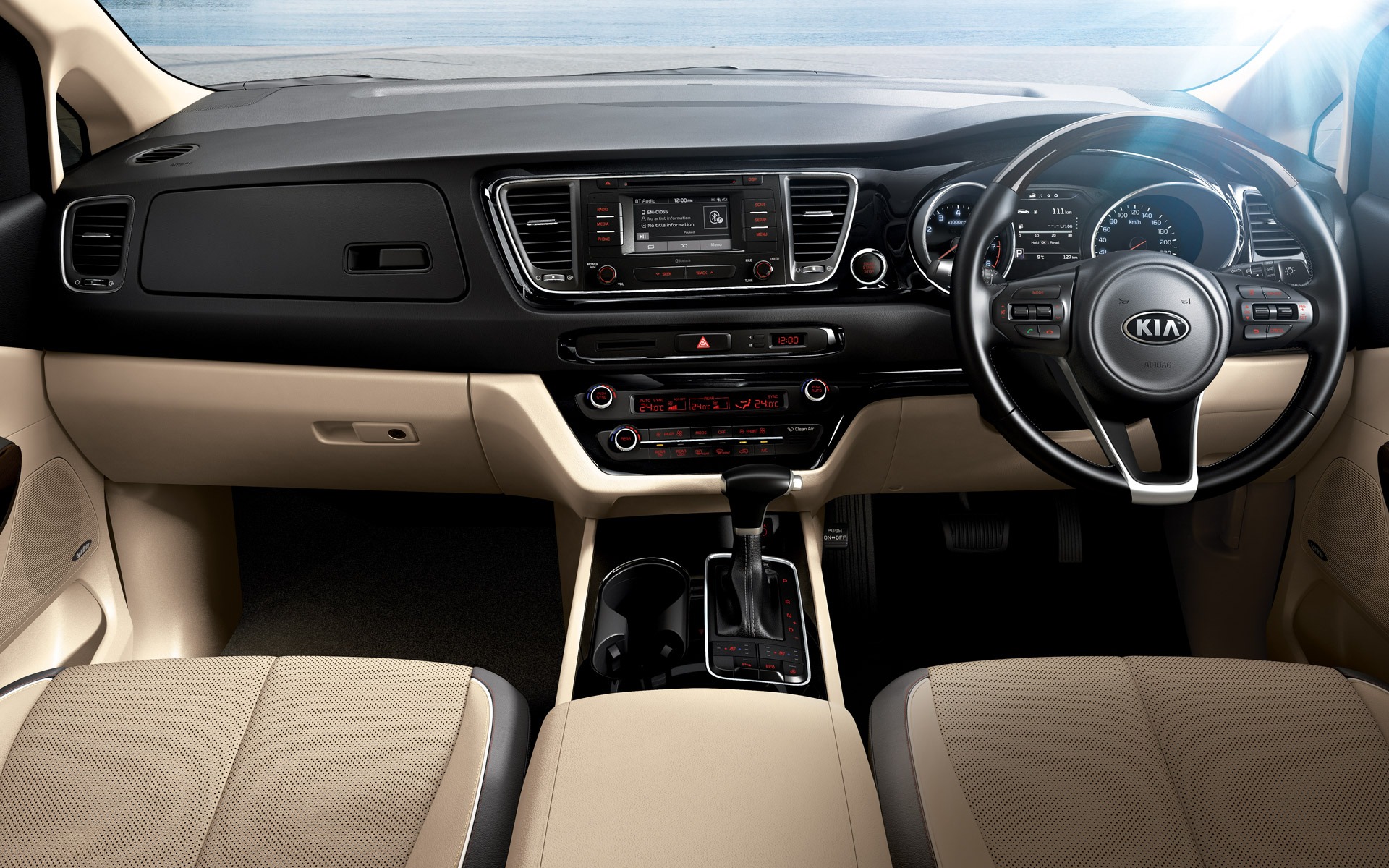 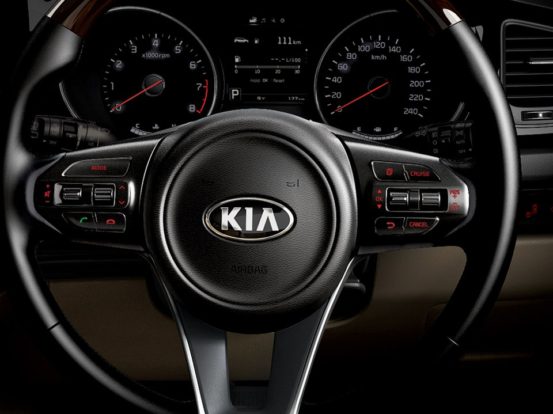 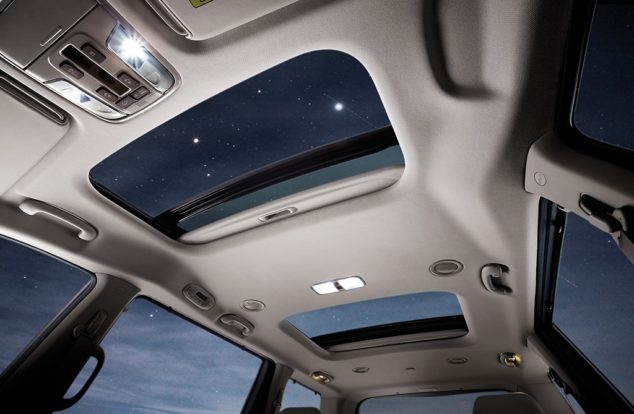 The Kia Grand Carnival has an amazing road presence, and gets all the attention as you drive out in the unrivaled luxury MPV. You will love the Grand Carnival if you have a large family and wish to travel with style and luxury. There is literally no end to the versatility it offers! You can head off to the beach for a barbeque with your family and camp out right there in the car. Its an ideal travel partner for a quick weekend getaway or for a long road trip. The Grand Carnival distributes its eleven passengers across four rows of seats, all with their own set of ceiling-mounted air-conditioning vents. The fourth row pops out from the floor for 3 extra seats. The seating configuration offers a lot of options as the second-row seats can be folded in a 40:20:40 split and the middle seat can be removed completely if you only want seats for two passengers. 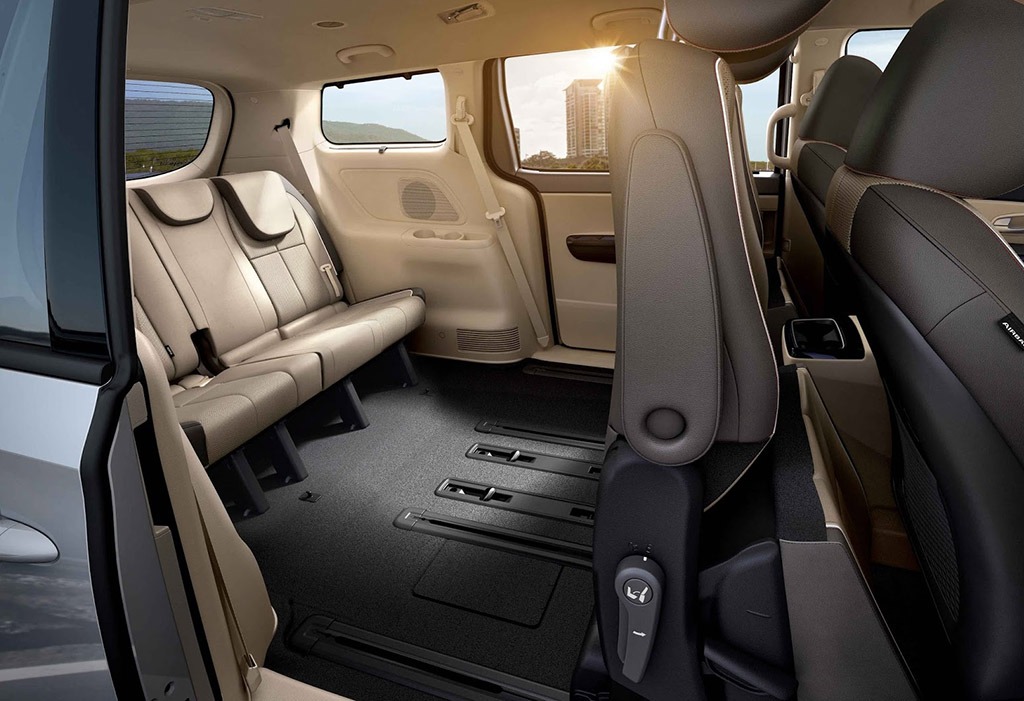 Getting into the third row is also easy as the second row seats don’t fold as most cars do but instead straightens upright which gives a wider opening to get to the back. Furthermore the third row seats can be folded flat in a 50:50 split to accommodate more cargo.

The Grand Carnival already has an impressive 359 liters of boot space with all the seats up and with the seats folded, offers a massive 2,718 liters of space which is a lot. 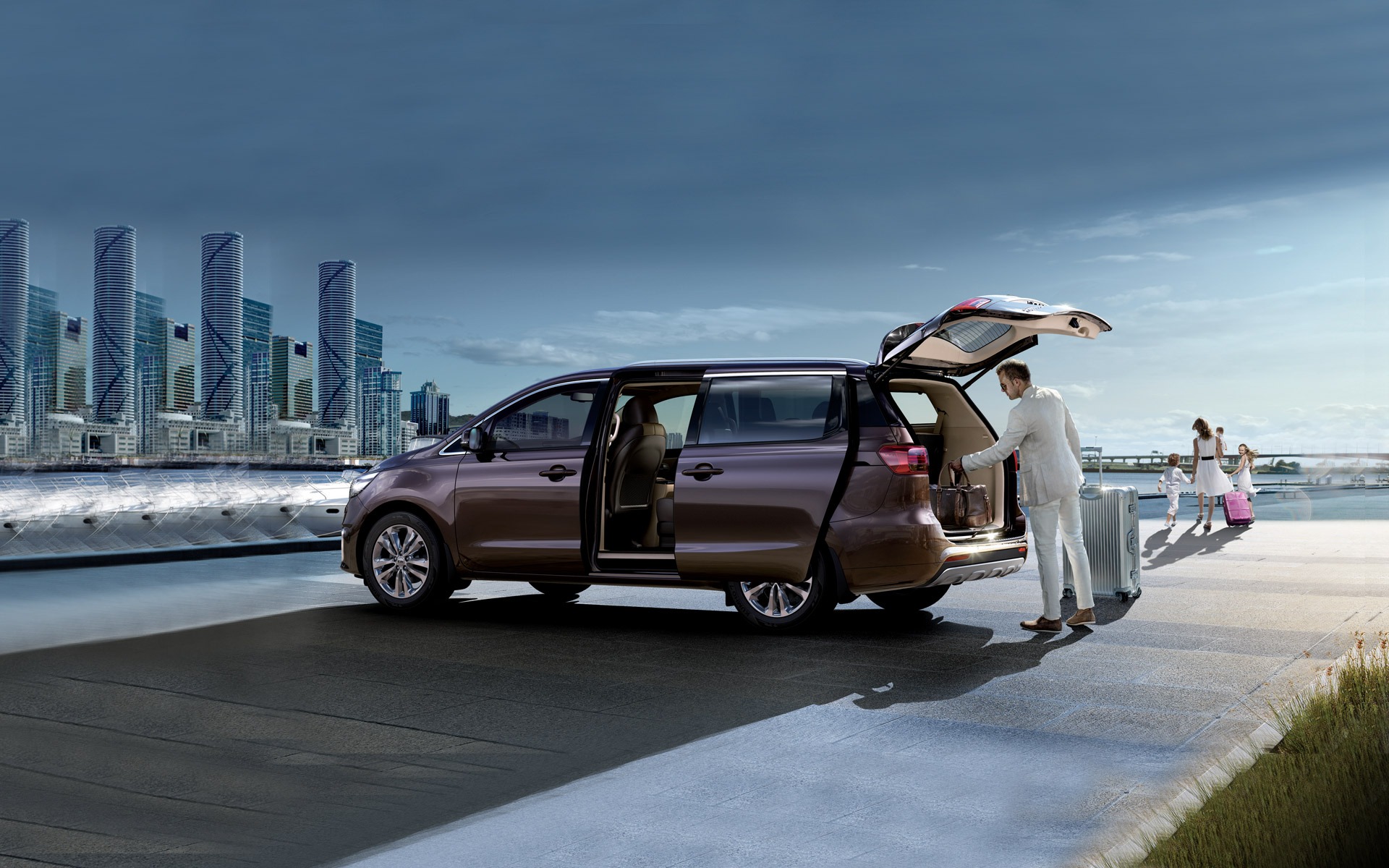 People in our market have started to consider people movers recently since they offer a prestigious travel for 7 or more people along. The Kia Grand Carnival targets exactly those lifestyle centric buyers with large families who prefer to travel in an esteemed manner rather than squeezing in a sedan in the name of resale. It’s indeed good to see new comers tapping the segments that were untouched in our market before. Kia-Lucky seems to be filling the gaps in Pakistan’s automobile market, by offering distinctive products such as the Grand Carnival MPV.

The Auto Policy 2016-21 has opened up doors for various newcomers to enter Pakistan’s automobile market. While Kia has been the first among the newcomers to launch their vehicles in Pakistan. Kia Lucky Motors has set the scene with their unique and unrivaled vehicles and will be launching many more in the future. Kia Lucky Motors is offering test drives, customer care, digital connects and much MORE.

The Grand Carnival is available to test drive now at dealerships in Karachi, Lahore and Faisalabad. All you have to do is register using the Kia Konnect app and you will be all set to take a test drive! Further details can be found on Kia Pakistan website. With the kind of vehicles the South Korean automaker is producing globally these days, it’s safe to say that Toyota, Honda and Suzuki will be facing some serious competition from Kia, which has got all the potential to sweep the market.

Stay tuned to CarSpiritPK for more information on Kia vehicles in Pakistan.