So MG is the latest to jump into the bandwagon to announce a massive price increase. According to the latest notification, the price of MG HS has been increased by Rs 850,000 effective from January 2022. The new price of MG HS is PKR 65.99 lac.

The company has mentioned depreciation of PKR against US Dollar, increase in freight charges, cost of transportation due to high petrol prices and high semi-conductor costs due to global chip shortage as reasons behind the price hike. Furthermore, for those having made full payment for November/ December 2021 deliveries, will have to pay Rs 200,000 more while those with partial payments will be liable to bear a Rs 500,000 increase. 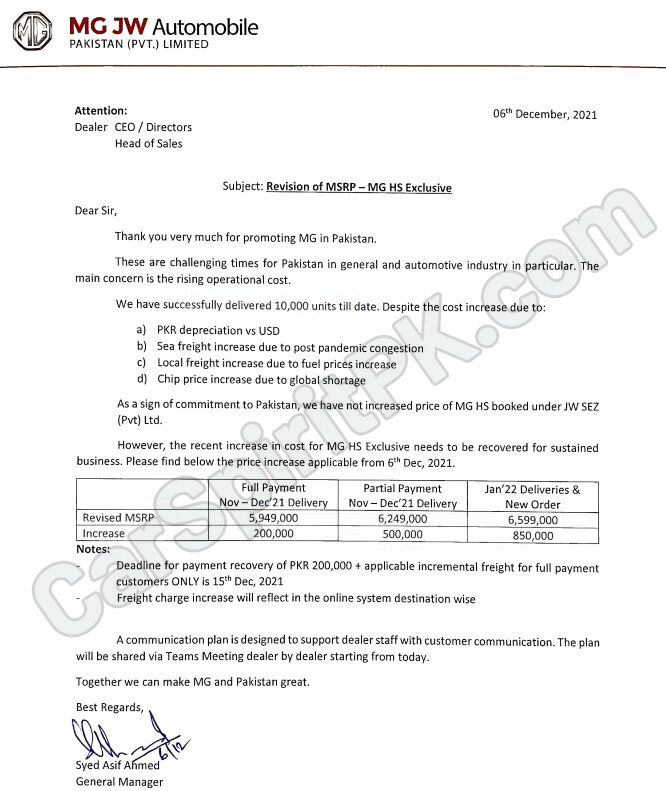 According to MG, it has so far delivered 10,000 units to its customers and however there is still no news on the beginning of CKD operations as thus far all MG units delivered to customers are CBUs. And with government putting a 6-months ban on the import of CBUs to curtail the widening current account deficit, there will be a big question mark on the deliveries of MG cars till the ban is lifted or the local production is kicked off.

Although the notification mentions the MG HS, as per sources the price of ZS crossover has also been increased by Rs 306,000 after which the MG ZS is available for PKR 44.41 lac.