MG7 Teased Ahead of its Debut as a New Flagship Sedan

MG has teased a new flagship sedan which will reside at the top of its model range. The all-new MG7 flagship sedan is set to make its debut on 17th August in China as the first product from its new Black Label series.

Black Label refers to a line of new high-end vehicles with added luxury and sportiness compared to the current MG lineup. Black Label cars wear black trim and black MG badges. However this isn’t the first time MG have used this nameplate. The first-gen MG7 (2007-2013) was nothing more but a mildly facelifted Rover 75 (1998-2005), which itself was based on BMW underpinnings. Thankfully, this second generation model is all-new, taking MG styling to the next level. MG7 adopts a low-slung fastback silhouette, depicting a muscular body with strong dynamic lines and pronounced rear shoulders. At the front, the LED headlights are slimmer and more aggressive than anything we have seen from the brand to date, flanked by large grille and side intakes. The rear end has full-width LED lights, an integrated duck-tail spoiler with active aerodynamics, plus quad exhaust pipes because MG7 will be an ICE-powered car.

While MG hasn’t revealed any official details about the MG7 apart from releasing a teaser video, according to Chinese media portals the MG7 will measure 4,884 mm long, 1,889 mm wide, and 1,447 mm tall. Under the hood it will get a turbocharged 2.0L engine that will be deployed in the 405 VTGI Trophy variants and will produce 254 hp of power and 405 Nm of torque, while paired to a 9-speed ZF automatic gearbox. There will also be a lesser 300 VTGI variant with a turbocharged 1.5: engine from the MG6 that produces 183 hp and 300 Nm, mated to a 7-speed DCT auto. More powerful plug-in hybrid variants are expected to arrive by mid-2023. 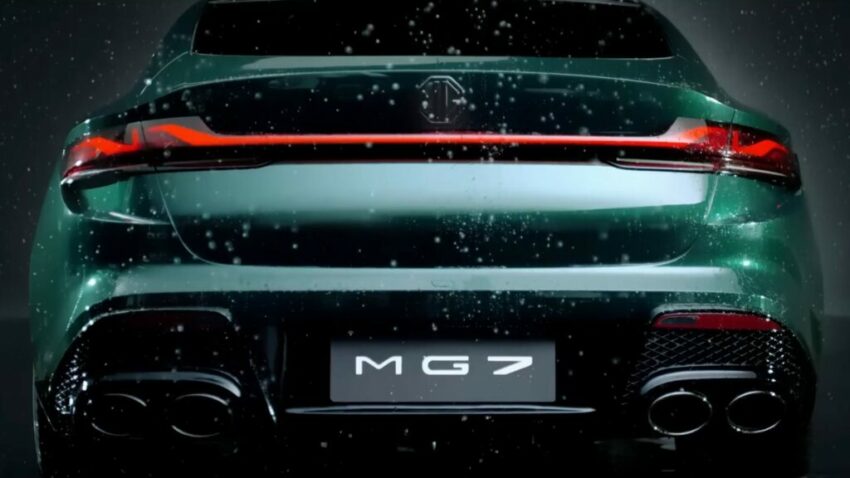 More information will be available when the MG7 debuts on August 17, however as speculated by Chinese media the MG7 won’t be headed to Europe just like the recently launched MG4 EV as European market is poised for crossovers & electrified vehicles. The MG7 will either likely stay within China, or will be reaching Southeast Asian and Oceanic markets where ICE powered cars are still in demand.