The All New 2018 Daihatsu Terios

Daihatsu has introduced the all-new 2018 Terios which will take on the SUV-flavored MPVs such as the Honda BR-V and Mitsubishi Xpander. The new Terios made its Indonesian debut earlier this week and will reach other ASEAN markets very soon.

The new 2018 Terios ditches the boxy 4×4 look of old model (no more spare wheel on the tailgate too) for an SUV inspired styling with hints of Toyota Fortuner in the design. The Terios comes with chrome horizontal slats, matched with chrome foglamp housings. The headlamps are LED units. It’s the same at the back, but with the addition of black trim bridging the long wraparound tail lamps. 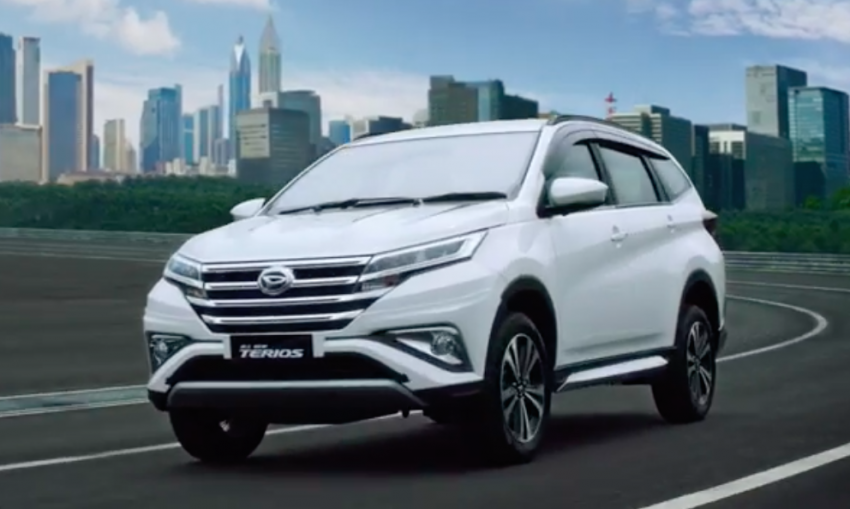 The new Terios is underpinned by an overhauled platform, although it retains the front engine, rear-wheel drive layout, according to Daihatsu the handling stability and ride comfort, NVH levels and fuel efficiency have all been improved. The 2018 Terios also gets a new engine – the 2NR-VE 1.5 liter Dual VVT-i unit which churns out 104 PS at 6,000 rpm and 136 Nm of torque at 4,200 rpm, mated to either a five-speed manual and four-speed automatic gearbox. The new engine is said to be nearly 25% more efficient than the previous one.

The Terios is a genuine 7 seater measuring 4,435 mm long and 1,695 mm wide, which is 18 mm shorter and 40 mm narrower than the Honda BR-V, although its 2,685 mm wheelbase is 23 mm longer than the BR-V’s, while ground clearance is also an impressively high 220 mm. Daihatsu says that the cabin length has been increased by 170 mm and cargo area length by 150 mm.

Daihatsu is now a wholly owned subsidiary of Toyota and takes the lead in developing small cars, which are later rebadged as Toyota to be sold in different markets. For example, the Daihatsu Mira which is rebadged as Toyota Pixis for certain markets. Similarly the Daihatsu Terios sibling is Toyota Rush which is technically the same vehicle with slightly different styling.