To celebrate the festive season in India, Maruti Suzuki has launched a new special edition model of their 2018 4th gen Swift hatchback. The new Suzuki Swift special edition is priced at INR 4.99 lac (PKR 8.5 lac). Well that’s the amount of money we spend to get a Suzuki Mehran, or say United Bravo.

Based on the entry-level LXi petrol and LDi diesel variants, the special edition Swift comes with several added features both in terms of exterior and interior. On the outside, the Suzuki Swift special edition comes with body-colored side mirrors, door handles and wheel covers finished in black. Inside, the car features equipment such as a Bluetooth supported single DIN music system, dual front speakers, power windows for driver and front passenger, central locking and reverse parking sensors. 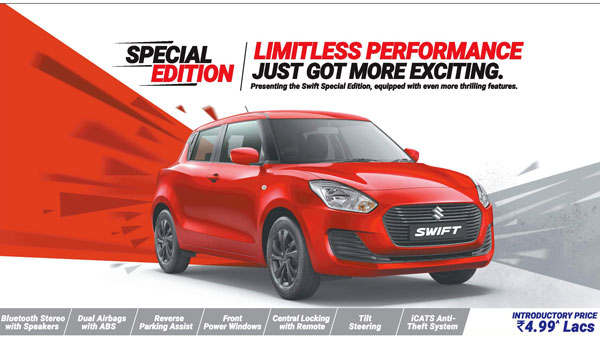 In India, the Swift hatchback is currently available in six variants: LXi, LDi, VXi, VDi, ZXi and ZDi and 14 trims. The 4th gen Swift is offered in both petrol and diesel engines including a 1.2-liter petrol and a 1.3-liter diesel mated to either a 5-speed manual or AGS (Auto Gear Shift) transmission.

The 4th generation Swift was launched in India on the 8th of February earlier this year replacing the 3rd gen Swift. It set a new record in the Indian car market by achieving the one hundred thousand sales milestone within just 145 days of being launched. Currently the Swift averages an astounding sales figure of 19,745 units a month in India, while the special edition model is expected to further boost the sales during the festive season.

The 4th generation Suzuki Swift made its global debut back in December 2016 and was available for sale in January 2017. Since then the popular hatchback has already reached most markets across the globe. The 4th generation Swift is based on the new Heartect platform making it lighter by about 85kgs than its predecessors. Due to a lighter bodyweight, the new Swift delivers better performance and fuel efficiency figures.

Pak Suzuki in our country has been dragging an almost 15 year old second generation Swift despite some hopeless sales figures. Launched in Pakistan in 2010 when the model was already replaced with a newer third generation elsewhere, the Swift sits at the bottom of the domestic sales chart with sales averaging around a terrible 350 units a month. Do you think it’s time for Pak Suzuki to replace the aging Swift with a newer generation model? Let us know with your comments.