The fifth generation Corolla is generally regarded as the most popular Corolla ever, when measured against its contemporaries. More than 3.3 million units were produced during its life span from 1983 to 1987.

The fifth generation Corolla was introduced to the market in May 1983, two months after the production total of Corollas reached the 10 million vehicles mark. Japan at that time was seeking a richer lifestyle, and preferences for high grade products were born. Individuals, particularly the younger generation, were exploring their own unique lifestyles, and their sense of values was diversifying. Providing an answer to this trend was the main issue for the fifth generation Corolla. The key development themes for the new model were “follow the worldwide trend of technical innovations and convert the Corolla into a front wheel drive passenger car,” and “pursue ample room and styling favored by the younger generation.”

The fifth generation Corolla was developed to further strengthen the dominance of the Corolla as the bestselling car in the world. In the four years after its release, it successfully acquired the No. 1 position in domestic sales and also received great reputations overseas.

The Father of 5th generation Corolla

In March 1979, Fumio Agetsuma, who had served as Development leader of the fourth generation Corolla, set the policy to design the fifth generation Corolla as an FF (front engine, front wheel drive) model. The world at that time was beginning to show signs of FF-based passenger cars becoming the mainstream; and in 1978 Toyota released its first FF model. However, the idea of converting the Corolla to an FF design was not readily approved. Because the Corolla was a passenger car produced in record numbers, was loved by a wide range of users regardless of age or gender and was being exported throughout the world, extreme caution was taken before making drastic changes.

In the first part of 1980 after the switch to an FF design had been approved, Agetsuma focused on the positioning of the fifth generation Corolla and stressed the need to “strive to ensure its status as a worldwide strategic vehicle that is a high quality, high grade family car and to reinforce its international competitive strength.”

Concerning the FF vehicle, Agetsuma stated at that time, “I believed that competitive family cars both from Japan and overseas would soon move towards FF designs to pursue the merits of straight line stability at high speeds, handling performance and a spacious interior.” Two hurdles stood before Agetsuma, who advocated an FF design for the Corolla from this belief. 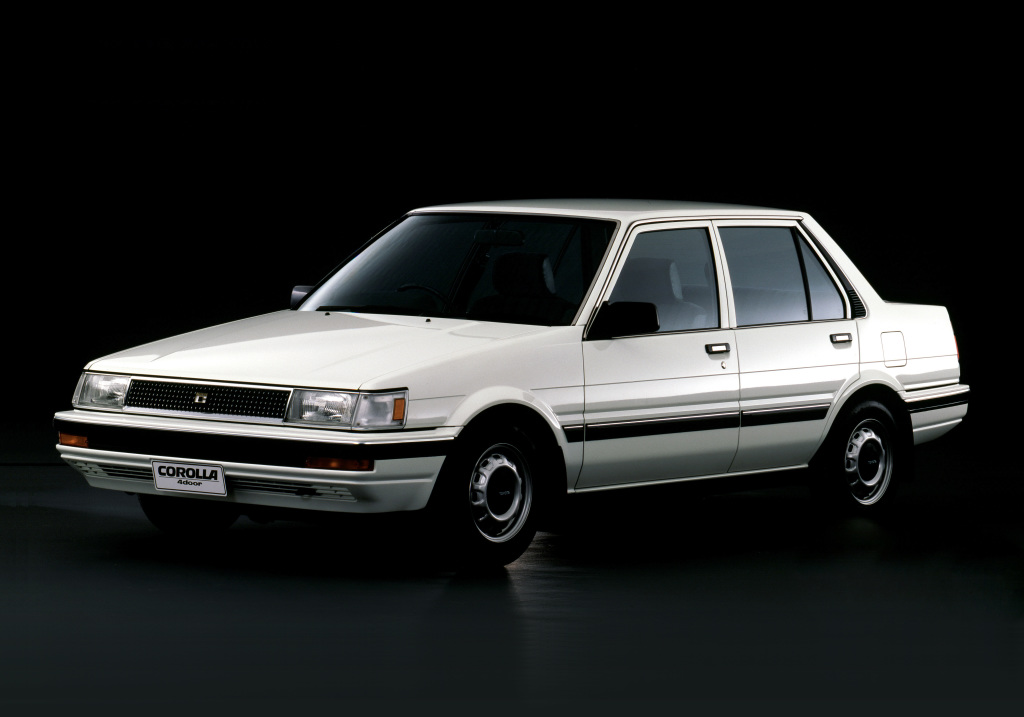 The first hurdle was a technical problem. FF designs use a complex mechanism to transmit drive power to the road surface while steering with the front wheels. Because of this complex mechanism, apprehensions existed concerning durability and repair serviceability after miles of use on rough roads. The Corolla was being exported to many nations with poor road conditions and would be driven continuously for long periods of time on bad roads. In fact, around that time there was a European manufacturer which had catastrophic results in exporting FF vehicles to nations with poor road conditions.

The second hurdle was that of cost. In 1979, preliminary calculations showed that the investment needed to convert the FR (front engine, rear wheel drive) Corolla plant, producing 727,000 units per year, into a FF Corolla plant would total 120 billion yen. This problem was solved with engineering technology that had made significant progress, and by producing the Corolla in both the FF and FR drive-trains. By adopting the FF design for the sedan, which stressed seating comfort, and the FR design for the coupe, which stressed driving excitement, and by using existing equipment as much as possible, the team successfully reduced the equipment investment expense by almost half. In addition, to those within the company who were opposed to the switch to an FF design, Agetsuma enthusiastically explained the value demanded by the times and the importance of the FF design. Finally in November 1979, the decision to convert to FF was official.

The fifth-generation was the first Corolla to make use of Computer Aided Design (CAD) in the development process and in the rapid preparation of three-dimensional renderings from clay models, a task that would normally have taken three experienced designers a full month to achieve.

In terms of the exterior, new Corolla’s large, slanted nose with bespoke headlamps and rounded wedge shape was designed to emphasize surface beauty, while the proportions were carefully measured to utilize the inherent packaging benefits of a FF drive-train. The saloon adopted a clean, notchback style with familiar two-box proportions, while the five-door model focused on aerodynamic characteristics, targeting a more youthful style and increased functionality. Coupe models, on the other hand, were based on the saloon, adding a free-form rear hatch culminating in a trailing edge pinched into a spoiler shape.

Concerning this overall style, Agetsuma stated: “I think that their gently curved silhouettes will create a new trend in world car designs.”

When creating the interior the development staff took a clean sheet approach in order to generate sufficient room for five adults. Within this market sector, improvements in interior space were usually limited to millimeter increments, so Toyota’s agonizing over the interior layout to gain several centimeters of extra room in most directions was seen as revolutionary.

Space was maximized through a number of methods, such as moving the steering wheel forward, lowering the floor and adopting a more vertical angle for the rear window. Expanded dimensions also made a significant contribution to interior comfort. Headroom and legroom were both increased over the previous generation Corolla, and the fully reclining front seats now featured an extended slide range and finer pitch adjustment to deliver optimal driving posture. Split folding rear seats were available to increase the versatility of saloon models, while coupe models featured distinctively designed lounge-type seats shaped to appear like they were integrated into the surrounding side panels.

Efforts were made to enhance equipment levels. Central door locking made getting in and out more convenient, and power was also applied to the front windows, door mirrors and sunroof. Intermittent wipers reduced driver effort and interior comfort was improved with the greater availability of air conditioning.

Its trend-setting nature was seen elsewhere, too. Toyota had begun full-scale use of computers in the design of its engines since 1980, primarily to calculate efficient shapes and complex rigidity values. As a result, the new Corolla featured many world-first mechanisms within the engine range, and the team posted more than 500 patent applications during the entire development process.

From launch the petrol engine line-up for FF models consisted of the 1.3-litre 2A-LU engine and 1.5-litre 3A-LU, plus the newly developed 1.6-litre 4A-ELU with electronic fuel injection. Interestingly, the new ‘L’ alpha designation in engine coding signified the transverse orientation of a power-plant originally designed for longitudinal mounting.

The 2A and 3A engines were extensively reworked to improve fuel economy and power by adopting new features. Later during May 1985, the 2A-LU was replaced with the more modern multi-valve 1.3-litre 2E-LU.

The new 4A-ELU was a derivative of the lightweight and fuel-efficient 3A motor, increased in displacement from 1.5- to 1.6-litres. The only alternatively fuelled Corolla for some markets came in the form of a 1.8-litre 1C-L diesel engine with 65PS and 83 lb/ft carried over from the previous generation.

As a result of the conversion to a FF drive-train, all suspension setups for saloon series models were new designs. A MacPherson strut with an L-shaped lower arm were developed for the front suspension, while a dual link strut with two lower arms was adopted for the rear end.

The suspension setup on coupe models was different, utilizing the same proven layout first seen in the third-generation Corolla – a four-link coil with a lateral rod. However, the suspension alignment and lateral rod positioning were reviewed to improve driving stability and ride comfort. All fifth-generation Corolla models used rack and pinion steering, a large proportion of which were available with power assisted steering.

In addition to the above, several new features were offered which were not available in the previous generation Corollas, including: According to Toyota, the Corolla had a continuous responsibility of being the ‘bread and butter’ for various people in nations throughout the world. And the 5th generation Corolla truly lived up to this reputation. Like every part of the world, the fifth generation was highly regarded as one of the most successful Corolla in our country and is still loved by many. For a long while, this generation valued more than its successor in our market and was considered a hard cash for more than 25 years of its life in Pakistan.