Toyota Vios- What to Expect?

The Auto Policy 2016-21 and the upcoming competition has forced the Big 3 of our market to do something out of the ordinary. Suzuki, Toyota and Honda which long dominated the automobile market with a handful of options that never rivaled each other are now forced to prepare for some severe competition against the upcoming European, South Korean and Chinese players.

The Big3 (Toyota, Suzuki and Honda) have already geared up to introduce new vehicles in 2018 and 2019. News regarding Indus Motors Company (IMC) discontinuing the 1300cc Corolla XLi and GLi have been circulating for quite some time now while a Limited Edition GLi is also on its way. IMC will discontinue the XLi & GLi and will instead launch the Vios sedan as a replacement most likely towards Q3 2018. (Edit: Vios Launch has been reportedly delayed to 2019). 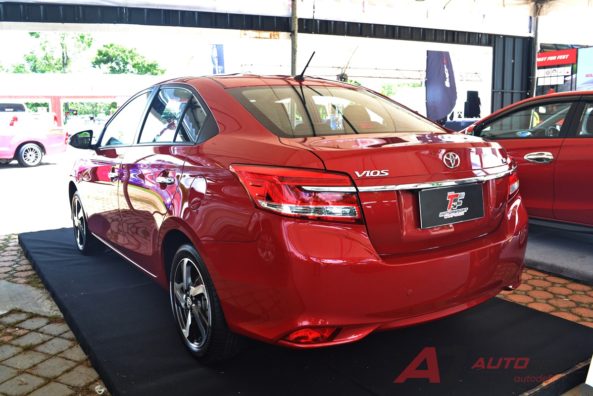 According to a report published in Dawn, local vendors have already started the development of parts for Toyota Vios while they have also finalized the cost of auto parts that will be made locally. To further confirm this, we inquired our sources in Thal Engineering, which makes electrical harnesses for Corolla models in Pakistan and it is confirmed that the company has started developing the harness for a new sedan.

You may think why IMC needs to replace the best selling Corolla variants with an entirely new car for Pakistan, however it makes sense since Pakistan is the only market in the world where Corolla is sold with a 1300cc 2NZ-FE engine. In other countries, this sort of engine configuration is offered with smaller sedans such as the Honda City and the Toyota Vios so it makes more sense for IMC to compete against the likes of smaller Kia Rio, Suzuki Ciaz and Honda City with the Vios, and let Corolla compete with the likes of upcoming Hyundai Elantra, as it does in international markets. This seems a better strategy for a long-term vision. 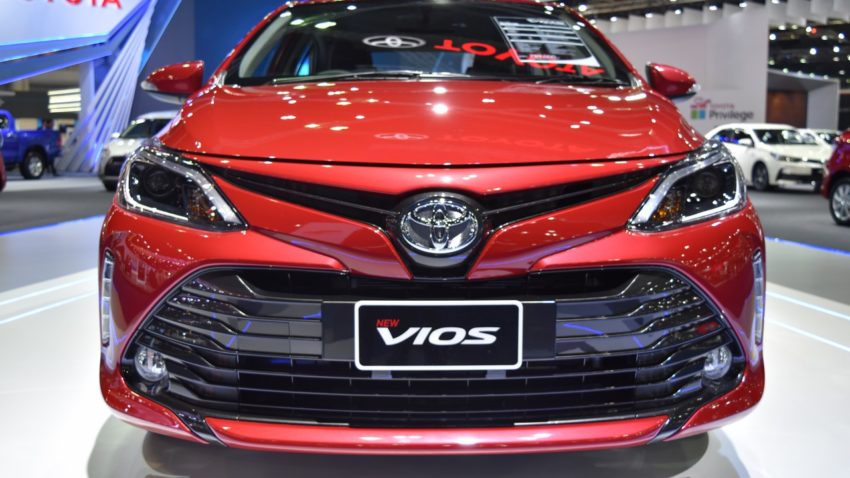 The Toyota Vios is a four-door subcompact sedan produced by the Japanese manufacturer, primarily for emerging markets in the Asia Pacific region. First introduced in 2002, it serves as a replacement of Toyota Tercel. The Vios is currently in its third generation (introduced in 2013) and has received a facelift in 2017. In international markets the Vios is available with either 1.3 or 1.5 liter engine configurations.

The third generation Vios has received a facelift last year however the visual appearance of Vios differs depending on the market where it’s sold. Currently there are three different Vios designs being sold in different markets. 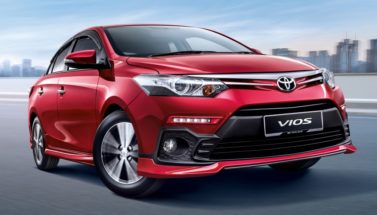 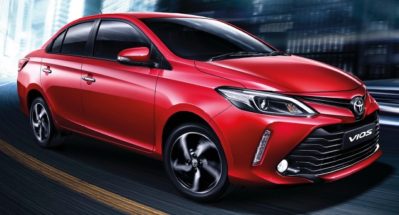 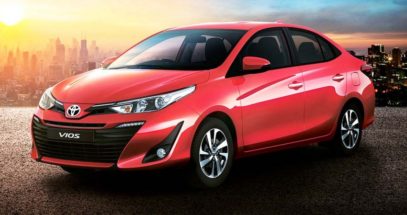 In Malaysia & Indonesia, the Vios continues with its pre-facelift look enhanced with body kit and redesigned bumpers. The second iteration is the facelift that was initially launched in China and has been introduced in other markets including Thailand. While the third is the rebadged Yaris Ativ as sold in Singapore. The Yaris Ativ was primarily launched in Thailand slotted below the Vios with a smaller 1.2 liter engine, while based on the same Vios platform with similar interior and body dimensions. We will have to keep our fingers crossed to see which iteration will be introduced in Pakistan.

In terms of dimensions the Vios is quite similar to fifth generation Honda City. It has the exact same wheelbase of 2550mm, is slightly shorter in length but slightly wider and stands marginally taller than the City. 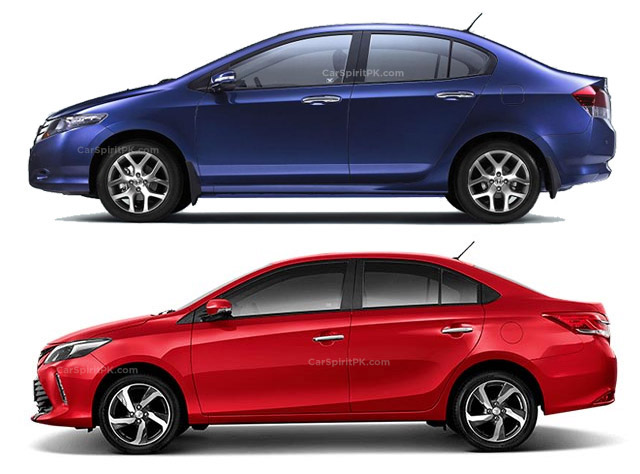 One of the key advantages for IMC is that the Vios carries the same 2NZ-FE petrol engine that they have been selling with Corolla since so many years. This engine has been around for quite some time now and the local mechanics & technicians are quite familiar with it, something that is largely preferred by used-car buyers.

It is also unofficially reported that a 1.5 liter engine, either a 1NZ-FE or 2NR-FE might also be introduced with the Vios, to compete well with Honda City 1.3 & 1.5 liter variants.

It is generally believed that the 1300cc Corolla variants are underpowered. It does however performs day-to-day tasks quite efficiently and many might counter the argument but if you have had a chance to drive the 1.6 & 1.8 liter Corolla variants, you might know what I am talking about.

On the other hand the Vios is nearly 200Kg lighter than the Corolla and that’s a lot, considering the fact that it will be powered by the same 1.3 liter 2NZ-FE engine, the performance and fuel efficiency is expected to be much better than that of 1.3 liter Corolla XLi/ GLi.

The 2018 Toyota Yaris Ativ has been awarded a five-star rating from the New Car Assessment Program for Southeast Asian Countries (ASEAN NCAP). The result obtained by the new Yaris Ativ is also applicable to its twin model, the Vios. 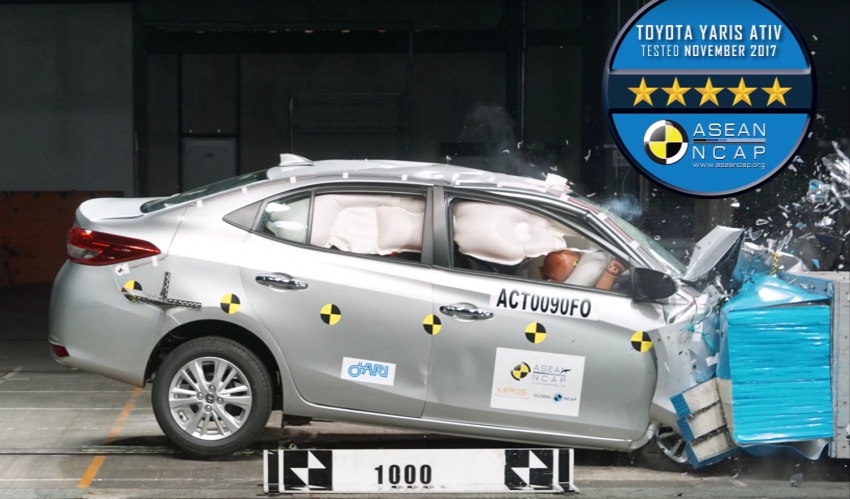 Safety-wise the Vios comes standard with dual front airbags, ABS with EBD, brake assist, a collision safety body (GOA), Isofix rear child seat anchors, as well as Vehicle Stability Control (VSC) and traction control. Other features include Electric Power Steering, Power Windows, Keyless entry with Push start, Auto air-condition, Multi-function steering wheel etc. However it will be too early to predict anything at this stage regarding the features & equipment IMC is going to offer. 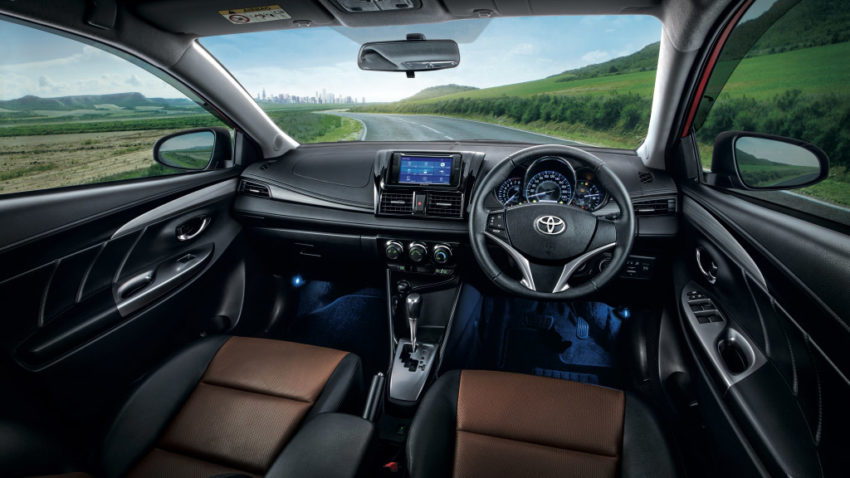 Due to the ongoing Rupee devaluation against US Dollar, it’s quite hard to predict the prices of Vios sedan in Pakistan. However it is believed that the Vios will be priced around Honda City, the base model of which already cost PKR 1.6 million.

The Toyota Vios will be a welcome addition to the IMC’s lineup in Pakistan and will help the company compete well in the subcompact segment. It is highly possible that IMC will retain the XLi & GLi emblems on the Vios since these names are successfully associated with the 1300cc Corolla models in our country. Similar move by Pak Suzuki went extremely successful when they continued with the Cultus nameplate on their new Celerio hatchback.

What is your opinion regarding the upcoming Toyota Vios, let us know with the comments. (Edit: Vios Launch has been reportedly delayed to 2019).