Toyota Yaris has scored a horrible 1-star rating in the latest round of Latin NCAP crash tests. This makes it the first Toyota ever to score a single star in Latin NCAP tests. Although the Yaris in Latin American markets come equipped with dual airbags and Electronic Stability Control (ESC) as standard, it still achieved 41.43% in Adult Occupant, 63.85% in Child Occupant, 61.63% in Pedestrian Protection and Vulnerable Road Users and 41.86% in Safety Assist section. 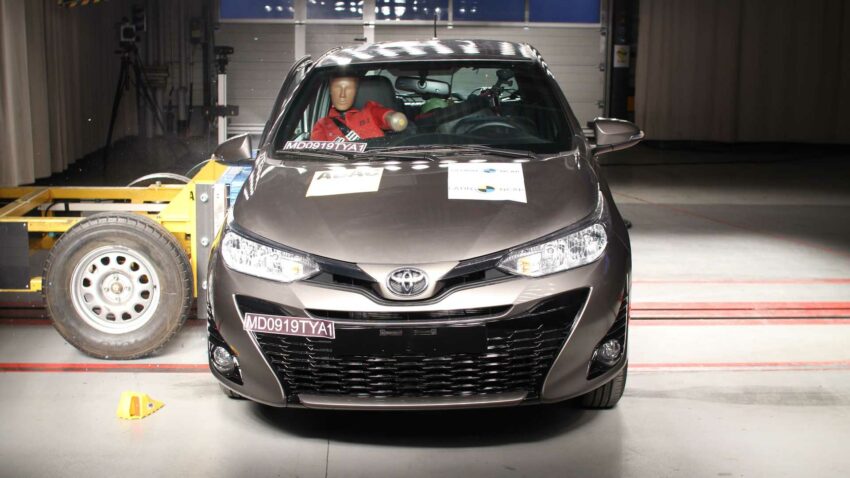 The Yaris for Latin American market does not offer side body and side head protection airbags as standard like the model sold in Thailand or Malaysia for example. In the frontal impact test, the model showed unstable structure and unstable footwell area performance. Side impact showed a door opening during the test, which means that the car would have failed the UN95 test. According to Latin NCAP, the door opening in the side impact requires immediate action by Toyota as it poses a serious risk of ejection in the case of side collisions.

The Latin American Yaris offers optional equipment that can potentially contribute to better performance and could have become standard in all model range but a decision of Toyota in Mexico affected negatively the standardization of key equipment to improve the result of the Yaris. As per sources, Toyota also refused to test the optional equipment to show its performance which opens the question of the effectiveness of those extra safety features.

Also, the Yaris seatbelt reminder system (SBR) showed no detection of the front passenger, Latin NCAP noted. The result is valid for the hatchback and sedan versions of the Yaris. Alejandro Furas, Secretary General of Latin NCAP while commenting on the test result, said:

“Even more surprising and disappointing is Toyota’s first ever one star model, the Yaris. It is concerning that a decision made by Toyota Mexico is the main reason for this result but moreover the responsible of the decision of not offering now, as standard key safety equipment. As a result of the decision, key safety equipment such as side body and side curtain airbags are not available for all Latin Americans”.

“Toyota Yaris is very disappointing that it has obtained only one star, as this car is so popular in our region, with a very high market penetration. In previous tests Toyota had a very good safety performance record, which is inevitably stained when designing with such low safety of one of the most accessible vehicles for consumers that the brand has, due to the risk involved in having a one star vehicle circulating on the streets of our region.”